Olivia Frazer and Jackson Lonie have given an almost-hour long tell-all interview about their infamy on Married at First Sight and holy hell, grab a cuppa and sit the fuck down because it’s a lot.

Speaking on the Where’s Your Head At? podcast, Olivia and Jackson dropped all kinds of tea about their time on the show, other couple’s relationships and spicy confrontations with producers. Oh, and the aftermath too. Honestly, this interview hath left no stone unturned — somehow, even Abbie Chatfield came up. Let’s get into the biggest takeaways, shall we? Remember to hang onto your grain of salt.

Olivia claimed that producers on the show “encouraged cheating” and “mismatched” people so they would fall for others. Honestly, this isn’t a totally new claim — Ella Ding also said she reckons people get mismatched on purpose.

What is new information is that Olivia revealed producers tried to convince Jessica Seraco to cheat with Anthony Cincotta.

Olivia said MAFS producers would ask Jess “do you wanna hook up with Anthony, he’s your type, he’s older, he’s got a beard, he’s Mediterranean”, but Jess refused.

Ella and Mitch faked their relationship

“Mitch [Eynaud] is going to kill me, I love Mitchell, I think he’s one of the best men on MAFS, but he never liked Ella,” Olivia told the podcast. Honestly, the most shocking part of that sentence was the claim Mitch is actually a good guy.

“It was never a thing for him, and she was like, ‘the longer we stay on this, the more money we’ll make’,” Olivia continued

“[Ella] always had this weird smug smile whenever I spoke to her one-on-one, she always seemed competitive with me over whose relationship was stronger.”

When talking about public backlash regarding her time on the show, Olivia said she does have empathy, and she only said she didn’t because that’s what the expert panel wanted to hear.

“Alessandra [Rampolla] went at me for about give minutes explaining through various insults, the reasons as to why I have no empathy,” she said. She actually mentioned this in her Instagram Q+A.

“And it’s three o’clock in the morning, I’m exhausted, I’ve copped bullying from all the experts, and not even valid reasons, just ‘jab, listen to my earpiece, another jab, listening to my earpiece, fuck you Olivia’.

“It’s three o’clock in the morning, you didn’t see it but I’m sobbing, I couldn’t speak and Jack was having to speak for me, and I just gave in and was like ‘yeah, whatever, I have no empathy. I want to go home, leave me alone’.”

Olivia reckons the expert panel are actually the producer’s “puppets”

When the expert panel was brought up, Olivia and Jackson had a lot of spicy things to say. Specifically, Jackson said: “Experts? You mean puppets?”

According to Olivia, when she would ask for advice, the experts would consult producers before responding. She claimed that they were only told information that would help the show’s narrative.

“[When we’d have] anxieties in our relationships we’d always wear them on our sleeve and say ‘I’m having really bad anxiety this week about this part of our relationship, can you talk us through that?’ and they’d be like ‘you guys are our golden couple, don’t worry about it’,” Olivia said.

“Then at the last commitment ceremony, I think that’s when they’d decided I was the villain, they we’re like ‘there’s holes in your relationship, you guys are miserable, you have no empathy Olivia, for all of these reasons.”

Jackson said: “I actually stumped them a few times because I was like ‘where are the holes in our relationship? Tell us what they are so we can work on them’ and they never did. They couldn’t give me answers.

“It didn’t make sense at the time and then when watching back, it’s like ‘oh, that’s why’.”

Olivia applied to be on MAFS several times

Olivia revealed that she was signed onto MAFS for both seasons 7 and 8, and only missed the latter because her match bailed. She said she had a “crazy, gut-pulling” instinct to be on the show and wanted to join since she was 19 years old. An odd ambition, but I guess she did find her partner on it??

I know some of you were waiting for this but God, I wish these two would just let this drama go. Why is she living in your head rent-free!!! Sigh.

Anyway, Olivia reckons everything she said to Domenica Calarco before and after distributing her nude photo to the cast was called for. Apparently “everyone” was on her side because they’re “smart”, not because of any gaslighting or bullying tactics.

“I never said anything that wasn’t warranted and I had support from majority of the group — for a good reason,” Olivia said.

Jackson charmingly accused Dom of fighting with every couple on MAFS, stating: “a hammer smashing everywhere is eventually going to hit a nail on the head”.

“She had a go at everybody and they aired the one that she got right,” Olivia said.

“She would pick who was having a bad time in their relationship, pick who she thought was a villain, and she’d go for their jugular.

“At the second dinner party, she lost her shit at the whole group because she wanted to go ambush Holly and Andrew‘s private conversation. She fully lost her shit and started screaming for her producer. But obviously that doesn’t air because they can’t make their princess look shit.

“It was perpetual screaming at everybody all the time”.

Dom and Jack apparently went to Bryce and Melissa for advice

Okay, now this is pretty wild.

Olivia claimed that Dom and her TV hubby Jack were concerned that they were going to get a villain edit because of their conflicts on the show, so apparently they reached out to arguably the worst MAFS villain ever Bryce Ruthven and his partner Melissa Rawson.

Producers told Olivia not to report the wine glass smash

When that nude photo scandal came up, Olivia doubled down on her claim that she didn’t try to slut-shame Dom. Apparently she shared the nude photo out of “resentment” at producers over the wine glass situation??

Producers allegedly told Olivia that while what happened to her was “shit”, if she reported Dom smashing a wine-glass while talking to her, then a lot of people could “lose their jobs”. Jackson claimed producers said the show would have to stop filming and the crew would be subpoenaed.

So, to get back at feeling “blackmailed”, Olivia tried to out the producers for apparently allowing Dom to violate the MAFS contract via OnlyFans (which turned out to not be a violation after all). Dom’s feelings were collateral damage?

“It wasn’t her actual voice [that annoyed me]” Olivia said, referring to some comments she made about Dom’s voice on MAFS.

“It was the screaming and the way she talks to people… A lot of c-bombs. It’s cringe, it’s low-class and it’s really aggressive.”

Wow, the classism really jumped out.

Olivia reckons she apologised too much, actually

“I’m not proud of it but I own it, I’m petty,” Olivia said when asked if she takes responsibility for her actions on the show.

“It’s a part of my character. It’s something I never, ever tried to hide.

“I definitely said a lot of things but — you didn’t get to see this — I apologised, many times, for individual things that I have done wrong. I apologised to Domenica on the show.

“When it came to the whole ‘photo scandal’, I couldn’t apologise anymore. Because I’d apologised so many times that I didn’t have it in me to be bullied into yet another apology.” SIGHHHH.

“Jack has and always will pull me up when I’m feeling shit,” Olivia said.

“At home, in public, on national telly, he will go for it. Viewers only saw him pull me up once because there was only once where I was actually being shit.

“The rest of it was complete and utter BS.”

ICYMI, Abbie Chatfield said she was “disgusted” with Olivia after she shared that nude pic of Dom around. Turns out, this blindsided Olivia.

“I’m a massive Abbie Chatfield fan,” she told Where’s Your Head At?.

“It hurt so much to see somebody who has also been a TV villain, who knows so much about the world of editing — it killed me to see her go for the pile on.” 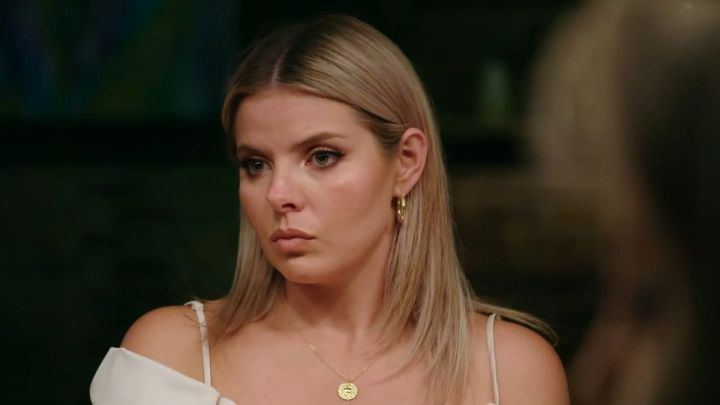 Olivia was forced to resign from her job after MAFS

Olivia revealed earlier this year that she lost her teaching job after MAFS aired, and now she wants to clear up rumours about how it happened.

“I never thought that I would have to leave my job. I was transparent and told [my workplace] everything that had happened while filming. It was literally not their choice, they were like ‘it’s fine, we’ll cover you’. But the backlash was just too much.

“Let me very clear, I was having to resign from my job.

“People are calling me a liar for saying that I had lost my job because I resigned, I don’t know, it got messy.

“I had to resign because of the public backlash of MAFS. It was a situation where it was ‘we need you to resign or other things are going to have to happen here’.

“They [her employers] loved me, they did absolutely everything they could to keep me. They made it very clear that I was already invaluable to them.”

Jackson has an OnlyFans and Olivia is thinking about starting one

Before this revelation, Olivia made it really clear that she is not a “slut-shaming prude” and that she doesn’t care that there were nude photos of Dom online — apparently the reason this Dom’s pic was a topic of interest to her and the group was because they thought it was a violation of their MAFS contract.

“Money is money,” Jackson said after he was asked if he would do more nudity content on OnlyFans. He actually already has one.

Olivia’s mental health was left in tatters after the show

“I’ve never had depression like this,” Olivia said, describing the effect backlash had on her when the season aired.

“I’ve never, like, honestly been this close to really thinking about taking my own life.”

But now, Olivia said she’s just learned to roll with it.

“I definitely did [feel like the weight was on my shoulders] but now it’s like, ‘smile and wave’.”

If you need mental health support, please call Lifeline on 13 11 14 or chat online.