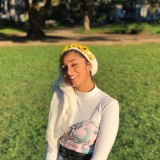 Soaliha Iqbal is a News Writer with PEDESTRIAN.TV and has been working as a journalist for three years. Previously she worked as a writer for youth publisher 5Why and was a columnist for Shameless Media. She’s also written for Mamamia, SBS Voices, 10Daily and Whimn. She has a Bachelors degree in Communications (Journalism) from UNSW.

Soaliha loves a good chat and has appeared as a guest on both FBi Radio and BBC Radio to discuss race politics in Australia. You also might’ve heard her having a yarn on Flex Mami’s Semi Factual History Lesson’s podcast as well as Abbie Chatfield’s It’s A Lot podcast. One of her greatest joys in life was rejecting an offer to appear on The Kyle and Jackie O show.

Soaliha hosts her own podcast called Here’s The Thing, Tho where she discusses politics, feminism, media trends and anti-capitalism. You can find her on Instagram @soalihaofficial

Amelia D’s Birthday Party Has Come And Gone So The Question Is, Did Andrew Garfield Show Up?

Litty Committee: Pour Yrself An Iced Tea And Lap Up The Best New Books Out This Feb

Just Gonna Say It: Hollywood Needs To Stop With Its Trashy & Problematic Biopics

‘Does Not Get A Free Pass’: Alec Baldwin Charged W/ Involuntary Manslaughter Over Rust Shooting

Um, Turns Out Carole Baskin’s Husband Was Found Alive Years Ago & No One Bloody Noticed

‘I Am Human’: New Zealand PM Jacinda Ardern Has Announced She’s Stepping Down