Britney Spears’ husband Sam Asghari has fired back at her ex Kevin Federline‘s claims the star’s Instagram content affected her relationship with their two sons.

In Instagram stories posted on Sunday, Asghari pointed out Spear’s revealing selfies — which Federline thinks are confronting for her sons — aren’t any worse than what we already see on TV and in cosmetic ads.

“To clarify, my wife has never posted a nude selfie except for her butt which is quite modest these days,” he wrote.

“All other posts were implied nudity which can be seen in any ad for lotion of soap. There is no validity in [Kevin Federline’s] statement regarding the kids distancing themselves and it is irresponsible to make that statement publicly.”

Asghari then took aim at what he considers suss timing of Federline’s interview. He reminded the public K-Fed supported Spears’ abusive conservatorship.

“The boys are very smart and will be 18 soon to make their own decisions. [They] may eventually realise the ‘tough’ part was having a father who hasn’t worked much in over 15 years and as a role model,” he said, referring to the fact Spears will no longer have to pay child support soon.

“Kevin’s gravy train will end soon which probably explains the timing of these hurtful statements.

“I do not know him personally and have nothing against him aside him choosing to vilify my wife.

“His character is revealed by [his] approval of the cruel 13-year-old conservatorship and his loyalty to Jaime [Spears] indicates his approval at [the] time of its conception as well.”

“Things that are now considered normal issues and behaviour easily dealt with [in] therapy or other ways were magnified to justify a 13-year prison sentence. Anyone approving of it is wrong or benefiting from it somehow,” Asghari said of Spears’ infamous 2007 “meltdown” and its resulting conservatorship.

“I will not comment further except to say I have a job,” he concluded jokingly.

He then added: “I wish him the best and hope he has a more positive outlook in the future for the benefit of all involved. But for now: Keep my wife’s name… out of your mouth.”

Federline took part in a series of exclusive interviews for British network ITV where he discussed just about everything from Britney Spears’ conservatorship to how often the kids see her — and why.

In the interview as quoted by the Daily Mail, Kevin revealed 16-year-old Sean and 15-year-old Jayden did not attend their mum’s recent wedding to Sam Asghari in June.

“The boys have decided they are not seeing her right now. It’s been a few months since they’ve seen her. They made the decision not to go to her wedding,” Kevin said.

He then referred to the revealing pictures she posts on Instagram as uncomfortable for their sons. It’s giving slut-shaming.

READ MORE
Paris Hilton Chose Britney Spears' Wedding Over DJing For Joe Biden Which Is, In A Word, Hot

“When Jamie took over, things got into order,” he said of Spears’ father.

Hmm. If by “order” you mean “basic human rights taken away” then sure, go off king.

Despite this rather sympathetic view of Jamie, Kevin Federline admitted the conservatorship took a toll on the boys.

“They’ve had a lot of questions about it,” Federline said.

“I don’t know that I can answer all of them… but I just tried to explain to them that your mum needed help, and the people were in play to try to make that happen, to make it better.”

He added: “This whole thing has been hard to watch, harder to live through, harder to watch my boys go through than anything else. It’s been tough.”

After the interview, Britney defended herself on Instagram. She said she was “hurt” that her nudes had been brought into the discussion.

After being “controlled and monitored” during her conservatorship for more than a decade, she said she could “embark” on doing more than “going topless on the beach”. 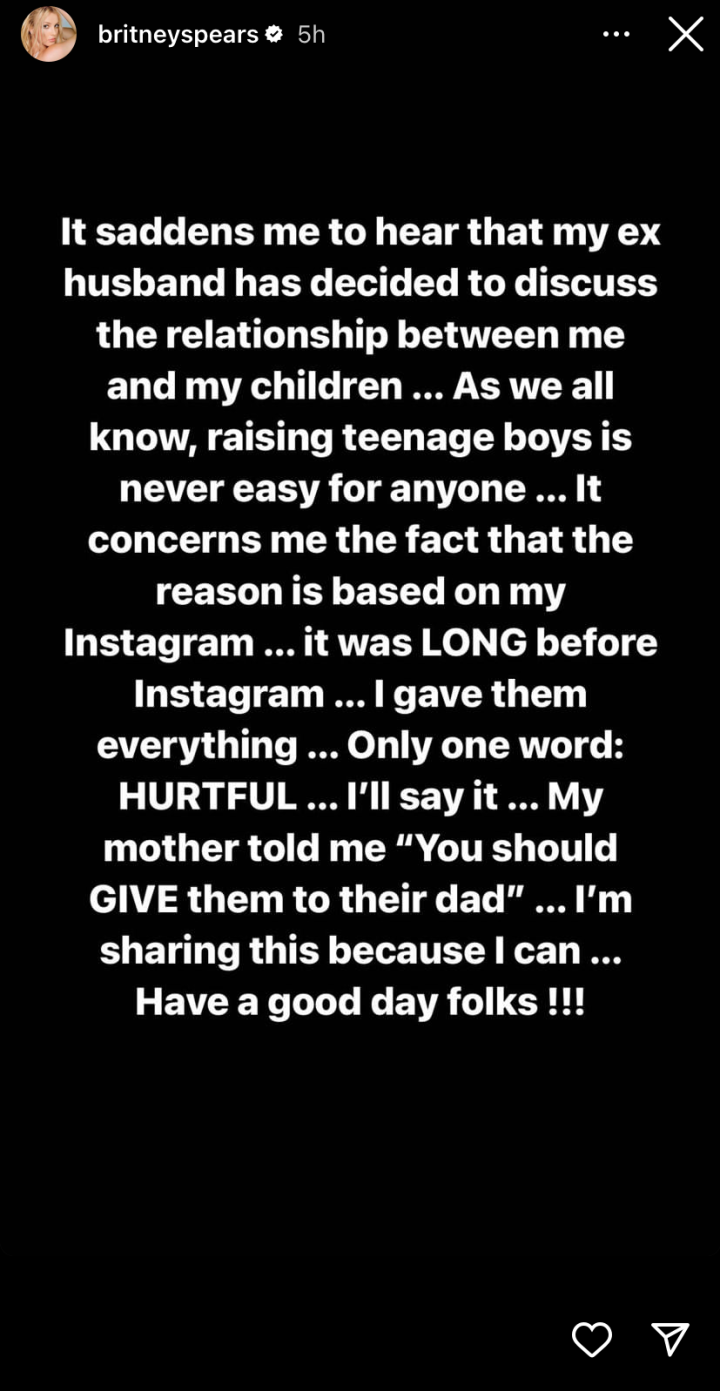 “It saddens me to hear that my ex husband has decided to discuss the relationship between me and my children,” she wrote in an Instagram story.

“As we all know, raising teenage boys is never easy for anyone.

“It concerns me the fact that the reason is based on my Instagram. It was long before Instagram. I gave them everything.”

She added that her mother told her to give her sons to their father.

In a separate Instagram post, Spears pointed out she had only been free from the conservatorship for 8 months.

“I’m only human and I’ve done my best,” she wrote.

“Other artists have made much worse when their children were extremely young.”

Sean Preston and Jayden currently live with Federline and his wife Victoria Prince.

According to the Daily Mail, Federline encourages the boys to talk about their mum “with love and to understand the complexities in which her life has been mired over the years.”

When asked about about the wider Spears family, with which Britney Spears has a strained relationship, Federline said of the boys: “I wish for them to forgive, to reach inner peace and then peace with each other one day.”