There isn’t a day that goes by without TikTokers circulating unhinged celebrity rumours (did you know Lea Michelle allegedly can’t read?) but this time I may have finally found a conspiracy that’s actually convincing. Enter this series of Reddit posts which fans reckon were secretly written by Grimes.

The speculation actually began two years ago with a suss post shared by user @throwRA-shifte on subreddit r/relationships. It was titled “My (31f) boyfriend (49m) convinced me that we needed to stop talking to my mom. I figured out why and it’s messing me up.”

It’s since been taken down (you can still find it on rareddit) but eagle-eyed fans noticed the ages of the couple lined with up with how old Grimes and Elon Musk were at the time. And that’s not all.

Paris shared screenshots of the post on TikTok: that’s where her video comes in.

It details a woman’s experience with her toxic partner during and after her pregnancy with a baby boy.

It’s pretty sad and includes claims her boyfriend gaslit her and refused to take her to a hospital while she battled hyperemesis gravidarum (HG). The writer said it took a doctor confirming she nearly died from medical issues around her pregnancy (including bleeding) for her boyfriend to believe she wasn’t being “dramatic”.

Interestingly, Grimes revealed in a Vanity Fair profile last week that she nearly died during her pregnancy after she haemorrhaged. It was part of the reason she used a surrogate to have her second child (more on that later).

The reddit post also said the girlfriend’s son was born on “Star Wars day”, May 4. This is also X Æ A-12‘s birthday. 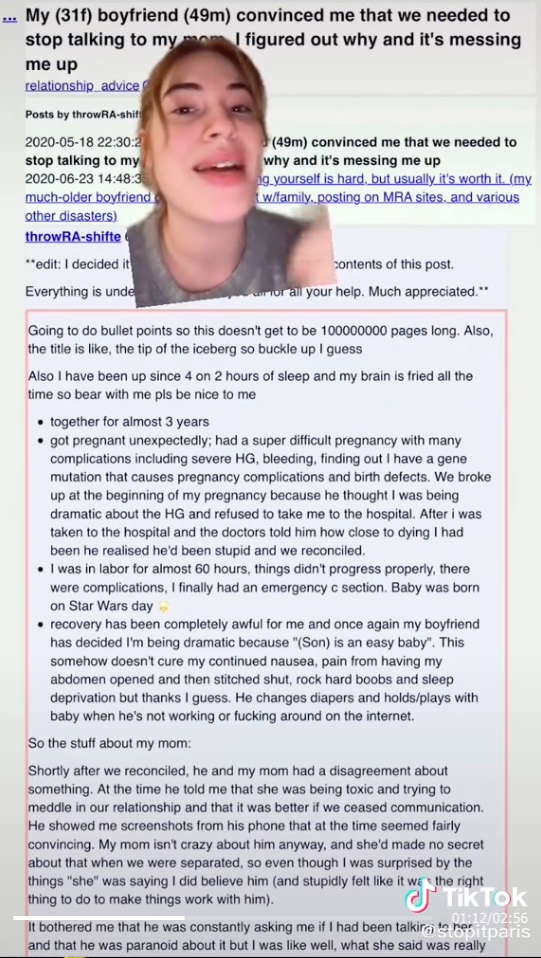 Plus, the poster described at length the tensions between her mother and her boyfriend.

“He snapped at me that my mom had filled my head with feminist garbage my whole life and that was why I was weak and couldn’t handle something women had been doing for thousands of years,” she wrote regarding his dismissal of her HG.

Yes, you guessed it: Grimes’ mum also has beef with Elon Musk, who she called out on Twitter shortly after X Æ A-12’s birth for being an MRA.

This is Grimes' mom. Thanksgiving is going to be fun. pic.twitter.com/7i3oLnzvrO

User @throwRA-shifte also made other posts on Reddit that *haven’t* been deleted, including this comment defending surrogacy. 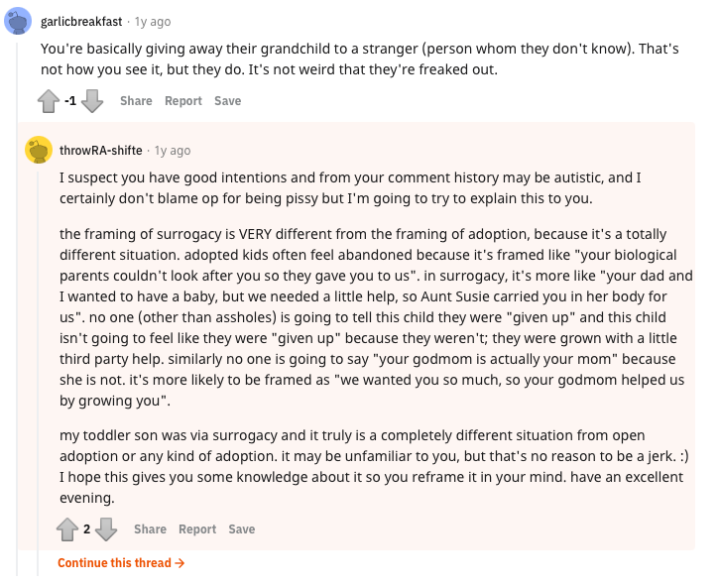 Mighty sus considering Grimes just had a baby via surrogacy! Though there is one hole in the story: the writer says her toddler son was born by surrogacy, but X Æ A-12 wasn’t.

However, since the same user previously said they were pregnant and birthed their son, fans reckon it’s just Grimes trying to cover her tracks.

In an update to her original post, @throwRA-shifte also said her boyfriend was an MRA who she caught saying some pretty awful shit online. Sound familiar?

Now look: we don’t actually know Grimes is behind these reddit posts. It could just as easily be someone impersonating Grimes to trick us as a big joke. Lord knows its exactly the kind of thing a reddit troll would do.

That being said, if this is Grimes’ secret reddit account, I’m glad to see in the updates that she (allegedly) got the help she needed. The latest reports reckon she’s now dating whistleblower Chelsea Manning (??) which is certainly, in my opinion, an upgrade.