FYI: I’d like to state for the record that myself and my comrades at PEDESTRIAN.TV do not condone the abuse of horses, therefore this article is not a celebration of horse racing but rather a loving ode to the iconic Kath & Kim episode that has earned a special place in the Aussie comedy canon and deserves to be honoured.

The races episode of Kath & Kim, titled The Mango Espadrille, contains some of the greatest moments in Australian television, I feel, as it really captures the essence of our culture.

It begins with Kath and Kel showing off their honeymoon pics to Brett, including a shot where they bungee jumped and Kath ended up meeting the pavement because the bungee was a bit long.

But being the true blue Aussies that they are, they were able to look on the bright side of the matter including the fact that the bungee company had since gone under (“which is noice”) and that they plan on having the pic blown up for their “official wedding portrait”. 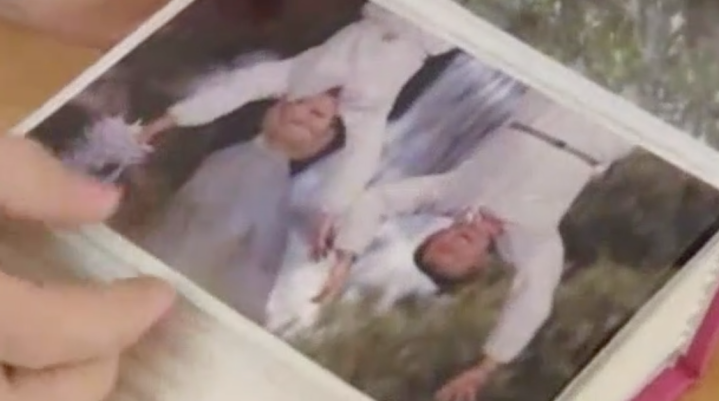 As the convo turns to the couple’s honeymoon sexcapades, Brett swiftly exits the conversation – a relatable moment for anyone with oversharing parents or in-laws.

Then in walks Sharon who demands that Kath “get frocked” ASAP so that the trio can head off to the train that’ll escort them to the races.

Having lived an hour west of Sydney’s CBD for the greater part of my life, the train scene spoke to my soul in a way that coming-of-age series’ of the U.S. and the UK never could (which is funny ‘cos this is hardly a coming-of-age show, it’s just so damn relatable, even in 2021). 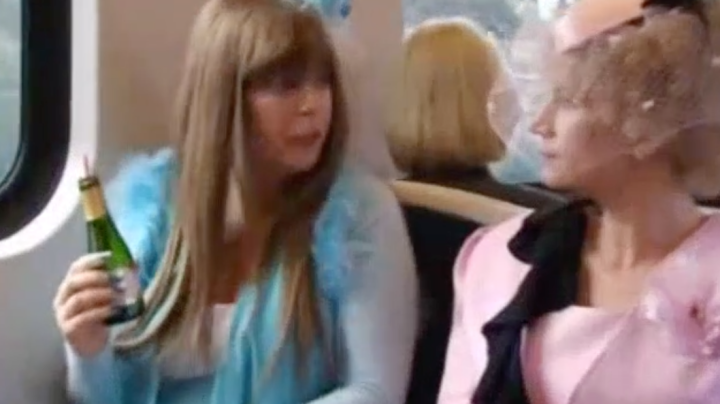 Once reunited, the pals discuss their plans for the day (including being “on the prowl”) and make a vow to “meet at the portaloos” should they lose each other – an age-old binding social contract for all music festivals and events of the like.

The train ride ends with the gals skulling their booze, then Kath demands that Kim not get “legless,” to which she responds with the immortal line, “Oh as if! You know I hardly drink anymore. Pissed mothers are such a bad look.” 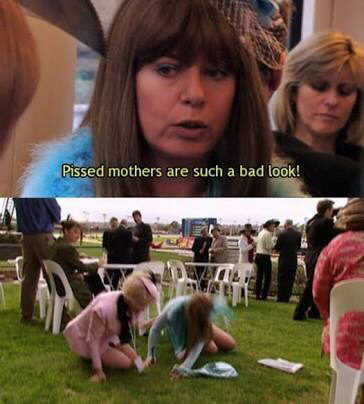 Cut to the pair getting wasted on free bubbles to the point where they’re squealing at the gate and toppling over into the grass.

They then stumble upon a marquee for “Melbourne’s influential people” which, after noticing that Paris Hilton was inside looking “a hundred bucks”, they weasel their way in.

There, they gorge on free treats and meet celebs including Mark Holden (Australian Idol was in its prime at the time) and Rachel Griffith but it’s game over when Kath voms on the star’s top and tries to pass it off as “a pretty brooch”. 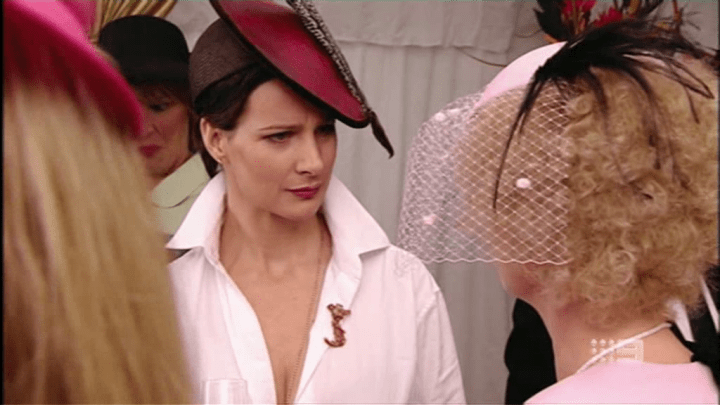 “it goes with your hat, doesn’t it? sort of toims with the thoime”

The gals, pissed as farts, stumble over to the portaloos and puke their guts up then remove the carrot stuck in their fascinators before continuing.

The following day is a perfect illustration of all households the morning after a night out with those nursing hangovers on the hunt for either a Berocca or a hair of the dog, in this case Bailey’s.

Meanwhile, Sharon begins dating a jockey who she had portaloo sex with at the races, but it all goes south when she freaks out as the pair are taking a sauna steam together. Poor Sharon. Very unlucky in love…

Kim and Brett enter little Epponee Rae in Bub’s Idol, a baby’s singing comp hosted at the local shopping centre and judged by Mark Holden (again, Aussie Idol was the shit at the time so this was a bloody good get).

As Kim boos and hisses the competition and notices another mum hitting on Bretty (who, BTW, is set to play Melissa Caddick in the upcoming Underbelly), she and the mum throw down midway through the comp. Classic.

The episode ends with Kath returning to the races, but rather than catching the train again, her great hunk o’ spunk of a husband rented a limo (complete with empty bar fridge), which she uses to show off in front of the neighbours, culminating in my favourite line from the entire series (which is saying something!): “Oh yes, hello, how the other half live.”

So ploise join us in saying nup to the cup, putting on some footy franks, and enjoying this iconique episode instead.