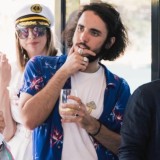 He launched PTV's first-ever astrology series 'Your Horos Are Here' and has become a trusted source in astrology across the country, having been invited on many radio shows like ABC and triple j and numerous podcasts to chat about the stars.

Speaking of stars! His celebrity interviews have become worldwide news, covered by the likes of the Los Angeles Times, Variety, Rolling Stone, NYLON, Teen Vogue, and many more.

You can reach out to Matt via any of the channels below.

Bloody Bonza, Mate: One (1) Aussie City Made It On The Top 10 Most Welcoming Places In The World

‘She Got Assistants Fired’: Deuxmoi Has Spilled A Bunch Of BTS Tea From Yr Fave Teen Dramas

Um, Is It Just Me Or Does Anna Delvey’s New Reality Show Sound Like Her Biggest Scam Of All?

Have A Go At All The Surprises, Snubs & Problematic Results From The 2023 Oscars Nominations

It’s Time To Panic! For Real Bc Panic! At The Disco Are Closing The Goddamn Door & Splitting Up

We Chatted To Kris And Kendall Jenner About Food, Fam And *That* Viral Cucumber Moment