Do you remember life before the influencer? I sure as shit do not. It’s hard to recall a time when the news wasn’t populated by scandal after scandal that an Aussie influencer has trodden in.

Whether they fuck up intentionally for publicity (all press is good press, apparently). Or they do it because they lack the ability to think before speaking and/or doing, for some reason influencers are always finding themselves in embarrassing blunders.

But I’ve gotta admit, what’s equally as embarrassing is our obsession with watching said blunders unfold.

Here, we’ve pulled together a bunch of ridiculous influencer scandals from the past few years that will live rent free in our minds forever.

Ruby Tuesday Matthews holding up a plane to slurp oysters

Back in October 2020, footage emerged of the moment Matthews walked back onto a Jetstar flight after delaying it, with the passengers yelling a whole bevy of insults.

The flight, which was departing from Byron Bay, was already being held back as they waited for an engineer to fly in from the Gold Coast. Matthews had left during this time delay to go eat oysters, which she posted to her Instagram story with the caption “flight delayed, fuck my life.” 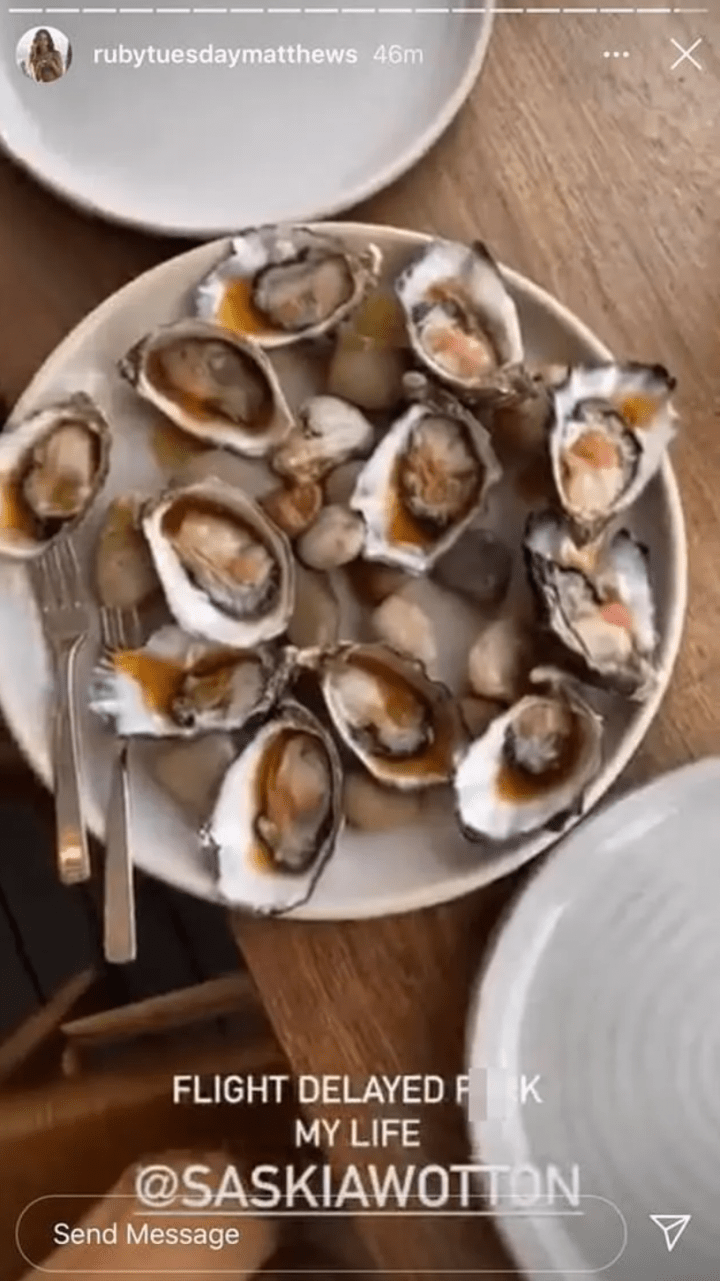 Ruby was dining with fellow influencer Saskia Wotton who would go on to star in Byron Baes. (Credit: Instagram)

In footage captured by passengers and shared by Daily Mail, folks could be heard yelling “how were the oysters?” and “it’s a good day to be pretty,” when the influencer finally returned to the flight half an hour after its already delayed departure time.

Passengers were just sitting there waiting on the tarmac for her to return, so you could imagine how pissed they were.

“I’m sorry but it really was not my fault,” she said.

“We were told it was going to be taking off at 7.45 pm, I had not eaten since my smoothie that morning because I had been in back-to-back meetings. I was like ‘fuck this, I’m going to get food out of the airport, it’s two hours until our flight takes off, I’m going to go’.

“I walked out, I did not hear the second announcement that apparently said ‘do not leave the airport’.”

To this day I cannot eat an oyster without thinking of Ruby Tuesday Matthews and a plane full of angry passengers.

If COVID has taught us one thing about influencers, it’s that some (read: a lot) of them lack the ability to read the room.

Take, for example, two influencers who run a foodie Insta who had the audacity to try and fang a free meal from a small business.

Earlier this year, Elle Groves (who owns @twoteaspoons along with her mate Annie Knight) messaged an undisclosed Aussie restaurant via Instagram asking to try out their food in exchange for posts on their personal and foodie accounts. It did not go down well.

Screenshots of the heated exchange were published online by John Lethlean — a food writer for The Australian.

“My friend and I have a food page together – @twoteaspooons – and saw your restaurant and thought it looked amazing!

“Would you guys be interested in doing this collab?

In response, the owner of the restaurant sent a huge paragraph detailing their struggles in simply trying to keep their business afloat.

The owner wrote that they’d had to “take a job at another venue on their days off just so they can continue to pay their staff properly and still be able to pay their rent”.

They also called out the fact that Groves’ message was essentially a copy/paste job that could have been sent to any restaurant in Australia.

“Reaching out blind to a venue you know nothing about looking for free stuff is a shitty enough thing to do at the best of times,” they wrote.

“But it’s even worse when COVID is still very much a thing, affecting small businesses like us devastatingly for two years now.”

The owner ended their message on an extremely satisfying note:

“Maybe give it a year or so and see how the business landscape looks, and see if you can amass enough followers for your ‘collabs’ to actually be of benefit to the venues you approach so naively, instead of them being only of benefit to you.”

In response, Groves told the Daily Mail that “we have never asked companies for free food, it is always left open to them to what they want to offer.”

“We have dined at 99 per cent of restaurants featured on our page paying full price.”

Sadly they’re not the only freeloaders on this list. Remember that time Mitch Orval asked for free shit for his bub and got called out?

Similar to the last yarn, food critic Lethlean shared a screenshot from an industry newsletter where Orval and Chloe Szep announced their pregnancy and told brands they were accepting gifts for the bub.

Lethlean posted the screenshot on his Insta and wrote, “Yuck. Call me old. But yuck.”

He also shared a screenshot from a fiery conversation with the influencer.

Orval reshared the post on his Insta Story and wrote, “To publicly humiliate someone when you’re in the industry you’re in is a disgrace. It’s online bullying and so unprofessional!”

He concluded, “I hope you sleep better at night.”

Orval took to his Insta to reveal that loads of his mates had sent him our yarn (I know this ‘cos he read our exact headline in his vid).

“Alright, so I’m starting to get this article sent to me by a few people, so I’m well aware of it,” he began.

“What’s going around at the moment is, ‘Instagram couple is rinsed by some food critic for requesting free shit for their baby’.”

“So just let me get this straight, just because there’s a bit of confusion,” he adds. “So what that’s about is our agency obviously sent an email to PR companies about collaborations with brands who want to work [with us] now knowing that we’re having a child.”

He then pointed out that Lethlean, being a food critic, would similarly receive free shit all the time as well.

“Because as you know, we work with brands every single fucking day of our lives,” he said. “Which I find very rich coming from a fucking food critic who probably goes around eating free food just to write about how shit the fucking satay sauce is.”

He insisted, “No, we didn’t ask for any free things. Our agency did their job, which is what they’re intended to do”

Orval concluded the rant with the following sick burn:

“So, Mr Food Critic, why don’t you do your job, go back to eating some prime rib, and shut the fuck up, buddy.”

Next up in influencers using their platform to fuck with small businesses is that time Jadé Tunchy got called out after unleashing her Insta followers on a small biz who refused to refund her honeymoon.

Tunchy was called out by Celeb Spellcheck over a series of now-deleted posts about her honeymoon which was booked for March this year.

She said in the post that after she and her fiancé Lachie Brycki postponed their wedding back in August of 2021, they contacted Weekenda (the small biz they’d booked their honeymoon through) and requested a refund.

Tunchy then accused the company of saying that the best they could do was relist the couple’s holiday online and see if someone else booked it. She then complained that the company denied her a refund.

“Six weeks out of the booking and we’ve again asked for a refund which they’ve denied. They’ve had months to refund us for a booking that we don’t need,” she said.

“They’re taking our money just because they can. It’s just incredibly poor form and so disappointing that businesses are taking advantage of people in the middle of a pandemic.”

Except the business wasn’t taking advantage of anyone because a no-cancellation policy is literally in their terms & conditions.

As pointed out by Celeb Spellcheck, Weekenda’s policy states that you can’t cancel your holiday and get a refund after you’ve paid for it.

Plus they’re a small business in the travel industry, one of the sectors hit worst by the pandemic.

Tunchy then posted another story saying “not y’all following them” directed at her followers.

She then revealed a little while later that the company had refunded her and Lachie.

“They’ve agreed to refund us our stay! Thank you for your help,” she wrote.

From there, she copped a ton of backlash for pressuring the small business into refunding her. The business later leaked her nasty emails just to show how awful the whole sitch was for them.

This was the beginning of a downward spiral for Tunchy which even resulted in her management “reviewing” the drama and several other claims about her behaviour.

Who could forget that time Elly Miles, an ex-Bachelorette and not a nutritionist, labelled fruits and vegetables “toxic” on Instagram?

Taking to her Instagram Story, Miles asked her followers to shoot through any questions they have about the Carnivore Diet and she’d answer them in an upcoming IGTV.

The attached post contained a list of foods which are supposedly the “most toxic” and “least toxic.” However they’re literally all healthy, recommended foods such as broccoli, nuts, seeds, grains, legumes, onions and leafy greens. 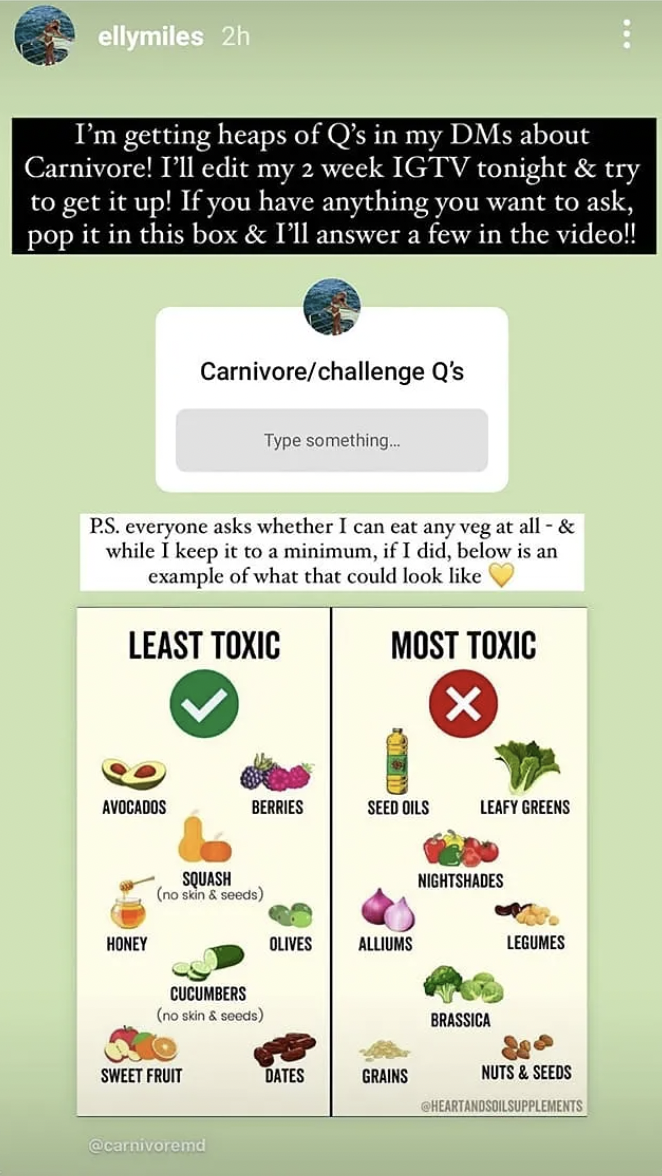 After copping a heap of backlash from her followers, including actual dieticians, Miles doubled-down on her incredibly shit take.

Speaking to Who Magazine, the ex-Bachelorette said she never intended to “shove” the Carnivore Diet “down anyone’s throats.”

“I love veggies, I have nothing against veggies,” she told the mag. “It’s absolutely devastating. My intention was to give people an example of the type of plants I’m able to implement into my diet during the challenge.

“It sucks it’s been taken this way and I’m sad I’ve upset people by it as well.”

She added, “When I announced to my audience and adopting this diet style I was met with a lot of curiosity by people who were considering it and were interested in seeing how I felt as I navigated my way through it, so I decided to document it.”

Ah, influencers. Will they ever learn?