The battle over baby products rages on as the influencer couple who were called out by salty ass food critic John Lethlean have hit back.

To recap: the Australian writer who started the #couscousforcomment hashtag in retaliation to influencers tryna score free meals launched an attack on influencer pair Chloe Szep and Mitchell Orval yesterday.

He shared a screenshot from an industry newsletter where the couple announced their pregnancy and told brands they were accepting gifts for the bub.

Lethlean posted the screenshot on his Insta and wrote, “Yuck. Call me old. But yuck.”

He also shared a screenshot from a fiery conversation with the proud dad who boasts 211k followers on IG.

Hello. I’m nobody and I figure, if I can get something for free, why not? My reputation for integrity ain’t worth a pinch of poo anyway #couscousforcomment

Orval reshared the post on his Insta Story and wrote, “To publicly humiliate someone when you’re in the industry you’re in is a disgrace. It’s online bullying and so unprofessional!”

He concludes, “I hope you sleep better at night.” 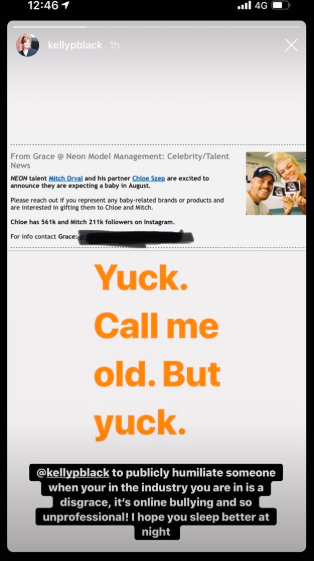 After our story went live, Orval took to his Insta to reveal that loads of his mates had sent him our yarn (I know this ‘coz he read our exact headline in his vid).

“Alright, so I’m starting to get this article sent to me by a few people, so I’m well aware of it,” he began.

“What’s going around at the moment is, ‘Instagram couple is rinsed by some food critic for requesting free shit for their baby’.”

“So just let me get this straight, just because there’s a bit of confusion,” he adds. “So what that’s about is our agency obviously sent an email to PR companies about collaborations with brands who want to work [with us] now knowing that we’re having a child.”

He then pointed out that Lethlean, being a food critic, would similarly receive free shit all the time as well.

“Because as you know, we work with brands every single fucking day of our lives,” he said. “Which I find very rich coming from a fucking food critic who probably goes around eating free food just to write about how shit the fucking satay sauce is.”

He insists, “No, we didn’t ask for any free things. Our agency did their job, which is what they’re intended to do”

Orval concluded the rant with the following sick burn:

“So, Mr Food Critic, why don’t you do your job, go back to eating some prime rib, and shut the fuck up, buddy.”

Now this is amusing. Go to @mitchellorval find his story and weep for the future

Lethlean later mocked Mitchell’s statement on Instagram, telling his followers: “Now this is amusing. Got to @mitchellorval, find his story and weep for the future.”

Will this ever end?

I bloody hope not, tbh.