Look, Christmas movie preferences are one of the most subjective (read: polarising) topics in the history of conversation, so while I simply can’t be assed watching Love Actually, all the while obsessing over The Grinch, I fully understand that other people probs think I’m a mad man. Then again, I did grow up watching The Grinch every year, so of course I’m a mad man. Look at the man I aspire to:

And it’s not just the character himself who’s mad, it turns out Jim Carrey (one of my fave comedians) also went a lil mad on the set of the iconic 2000 film.

I pitched this story in our recent Christmas features meeting, thinking that at least a few of my colleagues will have heard the wild yarn about Jim Carrey’s Grinch costume, but it turns out that not a lot of people know about this, so buckle up, bbs. You’re in for a wild one.

Apparently the big, hairy, green Grinch costume was an absolute NIGHTMARE to attach to Jim Carrey’s body. The process involved facial prosthetics, being encased head-to-toe in green yak fur and enlarged contact lenses being inserted over his eyes.

Carrey once described the process as “being buried alive every day,” saying it took eight and a half hours in total, although head make-up artist Rick Baker has recalled it being more like two and a half hours. The fact that there’s contention over how long it took gives you just an indication of how bewildering the whole process was, plus its impact on the people involved.

Because the process was so harrowing, Carrey became increasingly difficult to work with and, I mean, you would. Makeup artist Kazuhiro Tsuji, who worked under Baker, remembered in an interview with Vulture how “mean” Carrey was to everybody.

“After two weeks we only could finish three days’ worth of shooting schedule, because suddenly he would just disappear and when he came back, everything was ripped apart. We couldn’t shoot anything,” he revealed. 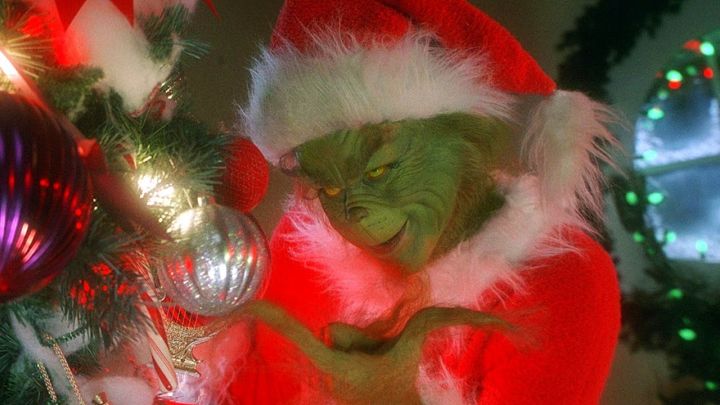 On one particularly horrendous day, Carrey lost his shit at Tsuji.

“In the makeup trailer he just suddenly stands up and looks in the mirror, and pointing on his chin, he goes, ‘This colour is different from what you did yesterday.’ I was using the same colour I used yesterday. He says, ‘Fix it.’ And okay, you know, I ‘fixed’ it. Every day was like that,” Tsuji recalled.

The makeup artist became so mentally exhausted that he ultimately had to take a break from the film to seek therapy.

“I went back under one condition,” Tsuji said. “I was talking with my friends, and they all told me, ‘You should ask for a raise before you go back.’ I didn’t want to do that – kind of nasty. Then I got the idea: How about I ask them to help me to get a Green Card?” [Editor’s note: a Green Card is permanent residency in the United States]. Green card. Green. Grinch green. Oh the irony.

With letters of recommendation from the filmmakers and BAFTA and Oscars wins for Best Make-up under his belt, Tsuji’s application was approved, although returning to production meant that he had to seek therapy over how unhappy he was at work.

“If I had a choice, I would not be in this mental state all the time,” he remembers thinking.

Meanwhile, Carrey was still going through his own hell over the “horrifying” experience of becoming the Grinch. Then, 92 days in, producer Brian Grazer brought in a man whose job it is to train CIA operatives on how to endure torture in order to help him deal with the pain of the makeup chair.

Do you understand how cooked this is? They literally hired a man who trains people to deal with TORTURE in case they’re captured in battle to deal with the pain of DRESSING UP AS THE GRINCH.

In a recent appearance on The Graham Norton Show, Carrey revealed the advice he was given by the expert was this: “Eat everything you see. If you’re freaking out and you start to spiral downwards, turn the television on, change a pattern, have someone you know come up and smack you in the head, punch yourself in the leg or smoke as much as you possibly can.”