We were lucky enough to be given a couple of sneaky glimpses inside the Met Gala 2021 thanks to Keke Palmer and her sad plate of food and, of course, the reporters who spilled tea about the wild afterparty.

Now, Deuxmoi’s sources have unleashed a bunch of intel and I’m fucking FROTHING over here.

The first piece of goss was about Vogue’s evil overlord Anna Wintour who was reportedly “freaking out about how the fashion shows were sub par and sent a letter to the designers telling them to step it up, just like in The Devil Wears Prada.

“She was also pissed that the gala didn’t have the right people.” OOF! 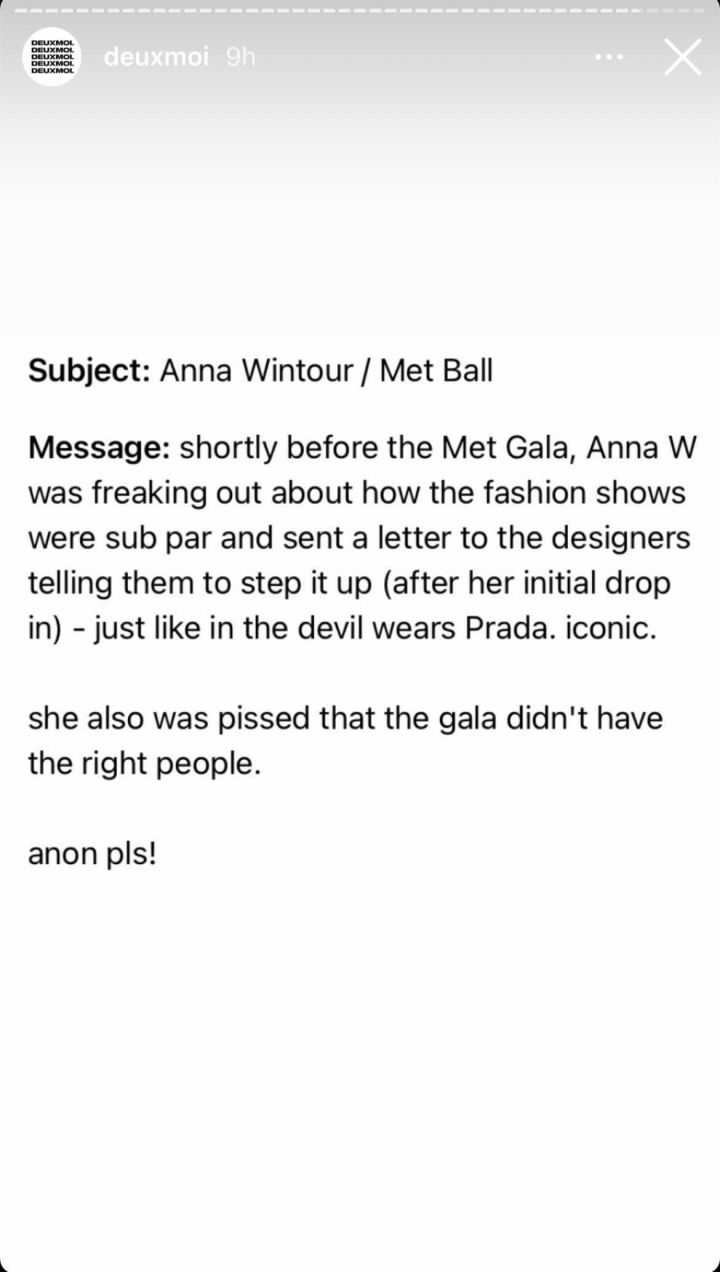 In a subsequent Instagram Story titled ‘Inside the MET,’ another one of Deux’s many spies revealed a bunch of sightings and overheards from fashion’s night of nights.

They began by noting that singer Madison Beer was “looking at Twitter mentions of herself at dinner.” Meanwhile Lil Nas X, who SLAYED the red carpet, “didn’t have a plan for his suit for dinner, so asked staff to hide it ‘somewhere he could find it’ after.”

Over at the Kardashian klan’s table, Kendall Jenner was snapping pics with a “small film camera”, while her momager Kris Jenner rolled in with a bottle of Kendall’s 818 tequila. Kendall, Cara Delevingne and Addison Rae “took shots of it and none of them even flinched,” which either means the grog is hella smooth, or they’re seasoned professional (or both!). 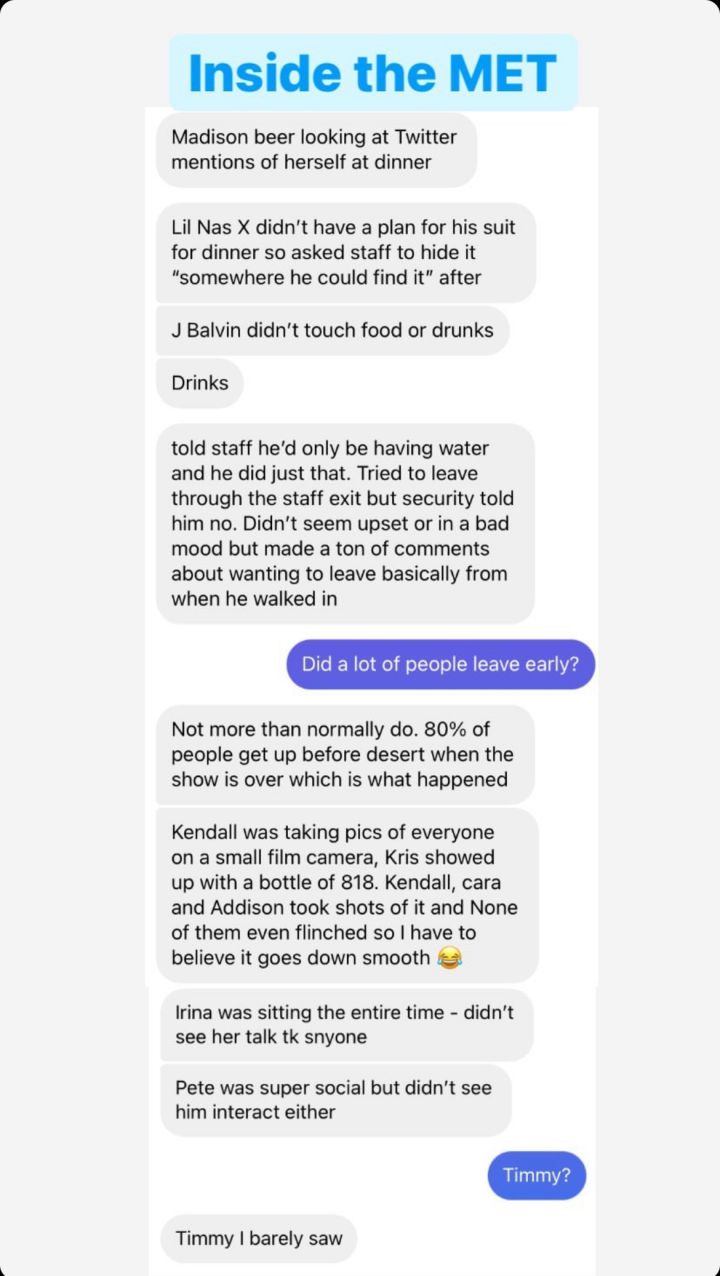 The source went on to list a bunch of attendees at the Balenciaga afterparty, which was an interesting tidbit since the reports from yesterday only covered Rihanna’s afterparty.

Have a read of that bad boi below: 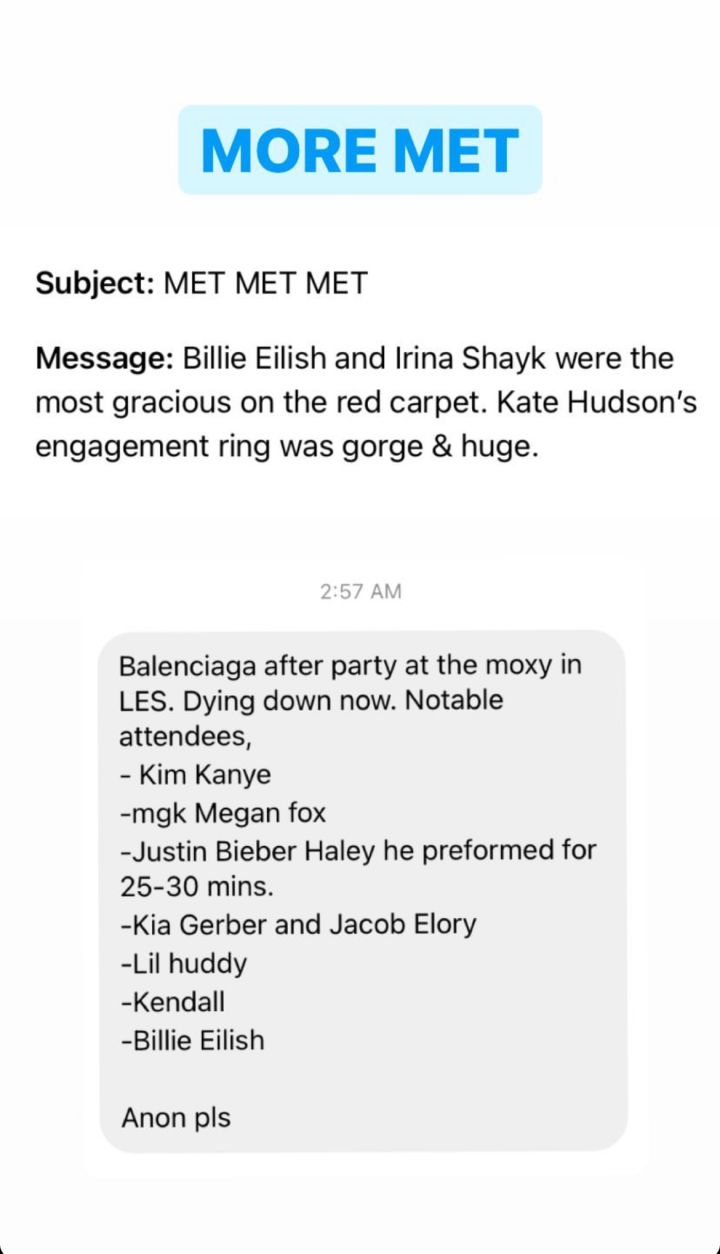 Now back to Rihanna’s afterparty, a separate Instagram Story via a separate Deuxmoi source said “Lorde and Julia Garner were so nice.” Bless!

While apparently Lil Nas X was “super obnoxious and rude. Had a lot of security.” I mean, in his defence, he’s been copping some mad disrespect at the award shows and I haven’t cared much for it at all!

They went on to note that Leonardo DiCaprio, Timothée Chalamet and Chance the Rapper were in attendance, and when asked if anything wild happened, they pointed out that the area was roped off, and all they saw was that they ran out of tequila. 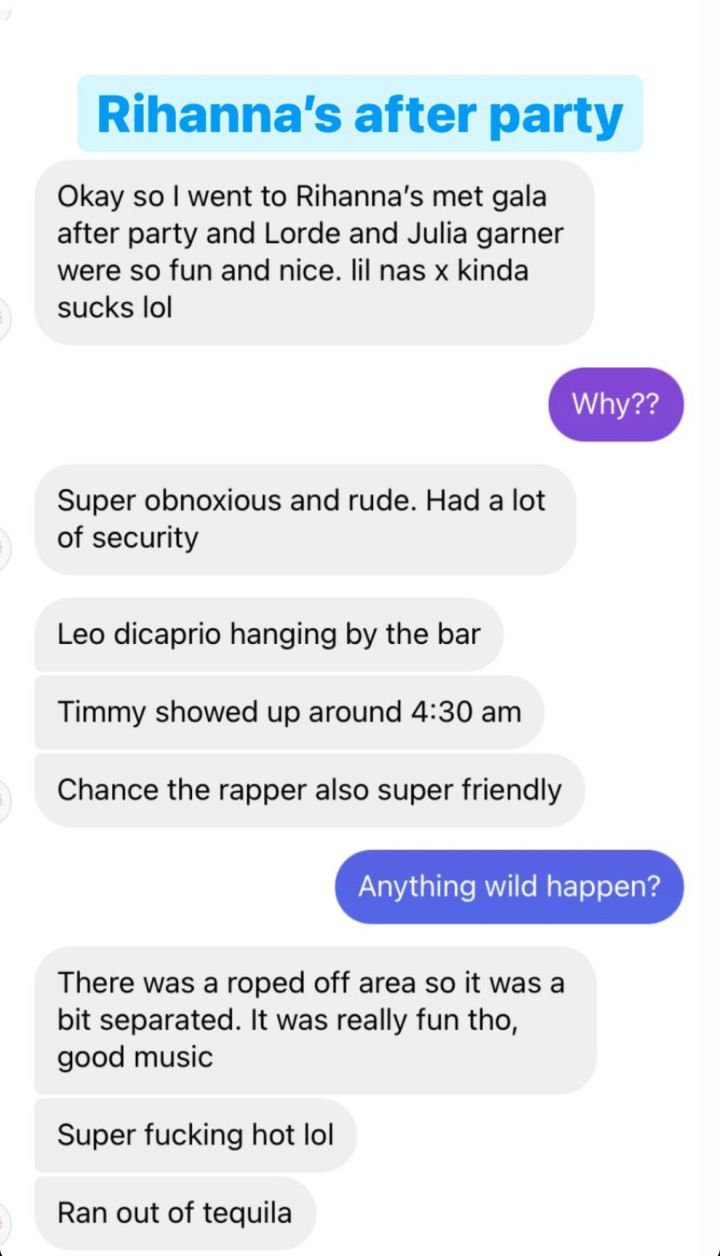 Deuxmoi’s source may have only been able to provide a coupla wild nuggets of info about Rihanna’s Met Gala 2021 afterparty, but we’ve gathered 17 wild sightings and overheards. Head here to have a peek at them.