Britney Spears and her loving boyfriend of nearly five years, Sam Asghari, are engaged and I could literally cry!!!

The singer shared the exciting news in an Instagram Reel alongside her boo, where she flashes her gorg engagement ring.

“I can’t fucking believe it,” the singer captioned the Instagram video of her and Asghari. Head here to have a peek. 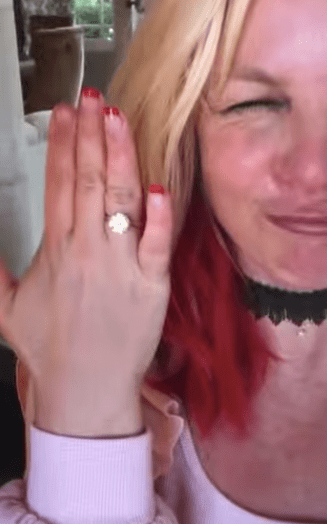 Her manager confirmed the news to Us Weekly, revealing the engagement took place at Spears’ home.

“The couple made their long-standing relationship official today and are deeply touched by the support, dedication and love expressed to them,” her rep said.

The ring was designed by New York ring designer, Roman Malayev, who said he “couldn’t be more happier to be involved and make this a one of a kind ring.”

Sam Asghari was recently spotted shopping for rings at Cartier. The 27-year-old looked at several pieces in the store and even asked the assisting employee to bring out a diamond ring for a closer look, according to Page Six. Have a look at the sweet snaps here.

Britney Spears and Sam Asghari met in October 2016 on the set of her ‘Slumber Party’ music video, where he played her love interest (life imitates art etc).

During Spears’ recent court hearing, she expressed that she would like to be able to get married to her devoted boyfriend and have children with him someday, but due to the conservatorship, she is unable to.

“I want to be able to get married and have a baby,” she told the judge. “I was told right now in the conservatorship, I’m not able to get married or have a baby, I have an IUD inside of myself right now so I don’t get pregnant. I wanted to take the IUD out so I could start trying to have another baby. But this so-called team won’t let me go to the doctor to take it out because they don’t want me to have children — any more children.”

The blissful news comes just after Britney’s evil overlord of a dad, Jamie Spears, agreed to step down as Britney Spears’ conservator. Now the next step is to have the conservatorship removed altogether, and we’ll be living in utopia!

Matty Galea is the Senior Entertainment Editor at PEDESTRIAN who also dabbles in woo-woo stuff like astrology and crystals and has been penning horoscopes since the start of his career. He also Tweets about pop culture and astrology and posts spicy content on Instagram.