Netflix and chill? Nah, I’m more keen on Netflix and thrill, and luckily for me, Netflix has a plethora of iconic spooky flicks to include on your next fright night. So I’ve kindly decided to round up the best horror movies on Netflix just for you. You’re welcome.

There’s a bunch of supernatural flicks with all kinds of ghosts and ghouls like Insidious, The Witch and Annabelle, plus movies featuring iconic villains like Freddy Vs Jason and It, and then there’s the scariest of all, IMO: movies based on IRL killers like Wolf Creek.

Be afraid, be very afraid… 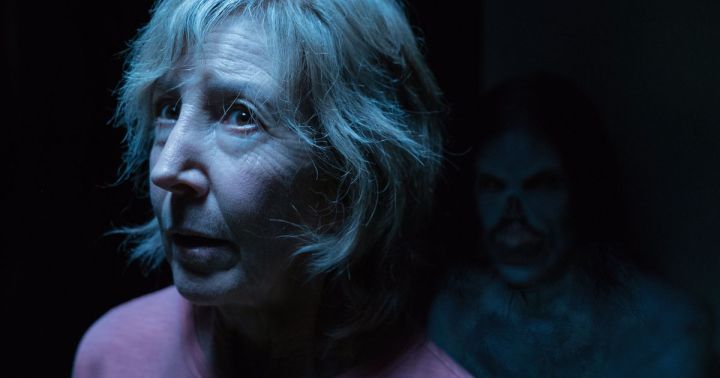 The fourth and final instalment in the Insidious franchise, arguably one of the most frightening horror movie franchises, is an absolute must-watch.

Despite being the final flick in the Insidious lot, The Last Key is actually the sequel to a prequel (the correct order is 3, 4, 1, 2, if that makes sense).

As is tradition, the movie does quite a few time jumps, just to keep ya on your toes. It kicks off in the 50s, then heads to 2010 (despite being released in 2018), with the purpose of providing context, of course, and closing the loop.

There are ghosts, demons, and pant-crapping jump scares that you’d expect from an Insidious movie. A fabulous finale to a fabulous film saga. 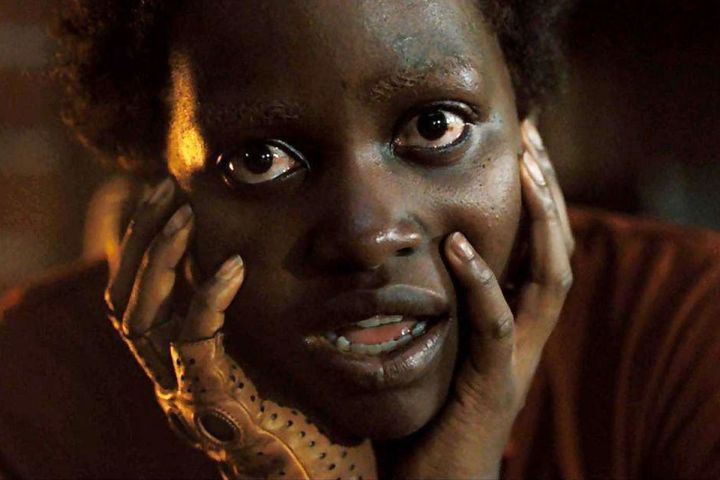 But it’s not just widely known and respected for its incredible director and cast (all of whom have been praised for their performances in the film), it’s also received acclaim for its underlying themes of racism, otherism and classism, to name a few.

Us follows Adelaide Wilson (Nyong’o) and her family, who are attacked by a group of menacing doppelgängers, culminating in a fucking wild twist at the end that’ll leave you speechless for days / weeks / months / years / the rest of your goddamn life.

The film has an approval rating of 93% based on 533 reviews, with an average rating of 7.93/10 which is pretty darn incredible. 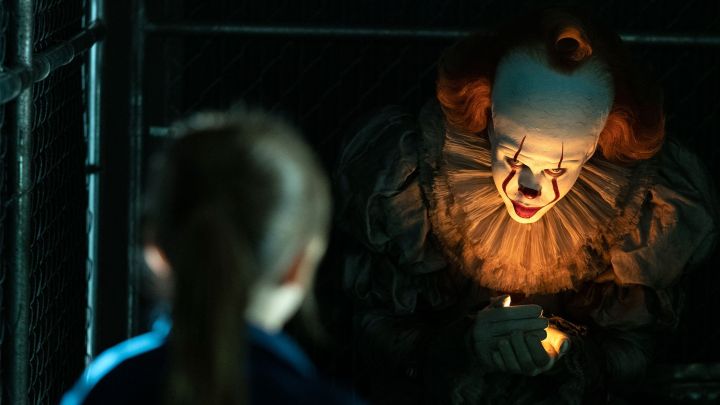 Netflix has the second flick in the horror film franchise, which sees the young victims of the deadly clown It return home to face their fears one more time.

The kiddos are all grown up and played by a crew of A+ stars including Jessica Chastain, James McAvoy, Bill Hader and, ofc, Bill Skarsgård returns to portray It like no one else can (barring Tim Curry, that is). 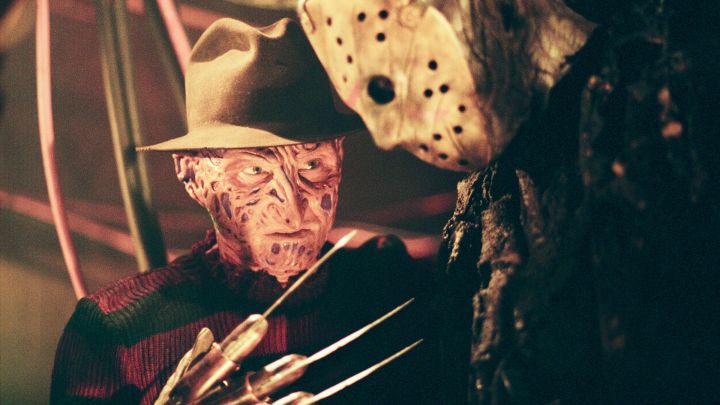 You can’t call yourself a true horror film fan if you haven’t seen the greatest crossover in cinematic history, Freddy Vs Jason, so you’d better jump onto Netflix now and give it a spin.

The film combines the big bads of two epic horror flicks, Freddy Kruger of A Nightmare on Elm Street and Jason Voorhees of Friday the 13th, pitting the two against each other for an absolutely bonkers movie.

Think Avengers: Infinity War was the most ambitious crossover event in history? Just wait ’til you see these two go at it.

READ MORE
A NYC Woman Found A Secret Apartment Behind Her Mirror, Which Sounds Like A Horror Movie To Me 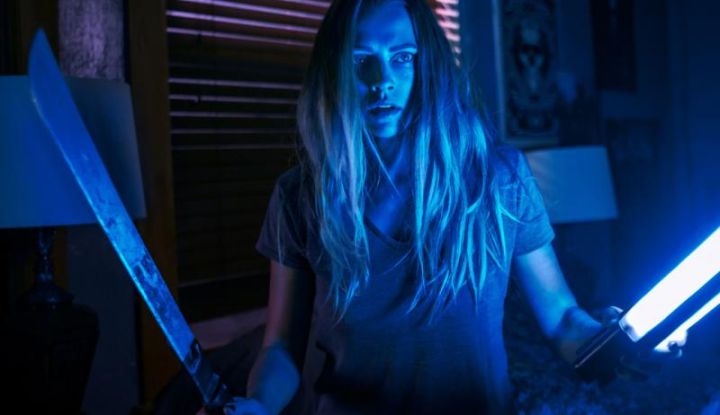 Australia’s very own Teresa Palmer leads the 2016 Netflix fright night treat that is Lights Out.

Rebecca (Palmer) is forced to dig deep and figure out what mysterious force is behind her little brother’s experiences that once tested her sanity, bringing her face-to-face with a demonic presence attached to their mother. Wild shit.

Lights Out premiered at a coupla movie fests and copped an award for Directors to Watch and a nomination for Best Special Effects.

6. It Comes At Night 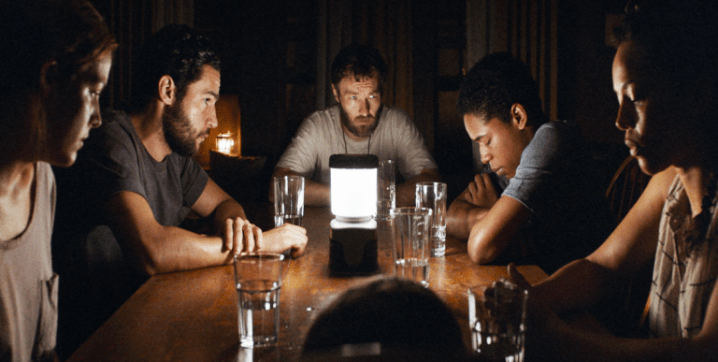 Another Aussie-led horror flick to add to your Netflix queue, It Comes At Night stars local yokel Joel Edgerton as a bloke seeking refuge from a terrifying unnatural threat that terrorises the world.

It was inspired by two iconique horror movies, Night of the Living Dead and The Shining, which you can totally see in the movie’s theme and format.

7. In The Tall Grass 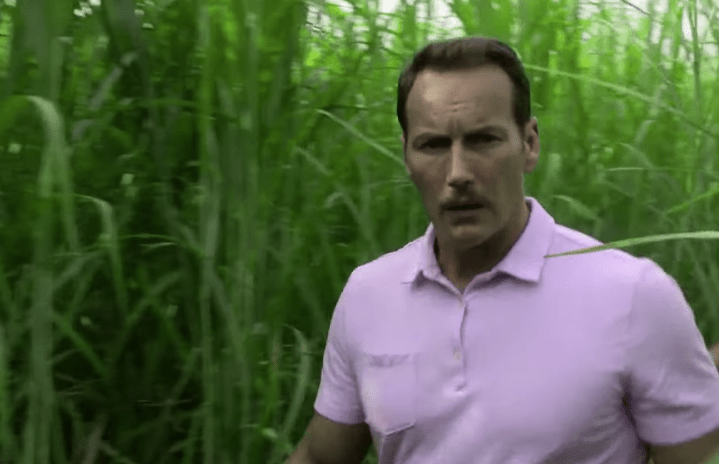 This 2019 Netflix OG is based on Stephen King and Joe Hill’s 2012 novella of the same name which, as I’ve stated already, means we’re in for an absolute treat and a half.

As the title suggests, the film features some tall grass – some very fucking tall grass, at that – which is pretty much the main antagonist. Doesn’t sound like the makings of one of the best horror movies on Netflix, but I promise you it’s spooky as hell, especially if you come from a country town, like me.

Fun fact: The film was originally supposed to star James Marsden as its protagonist but he stepped away from the project to star in *checks notes* Sonic the Hedgehog. Instead, The Conjuring legend Patrick Wilson filled in and does a superb job.

READ MORE
The Couple That Bought *The* 'Conjuring' House Say It's Haunted As Shit And, Well, Duh 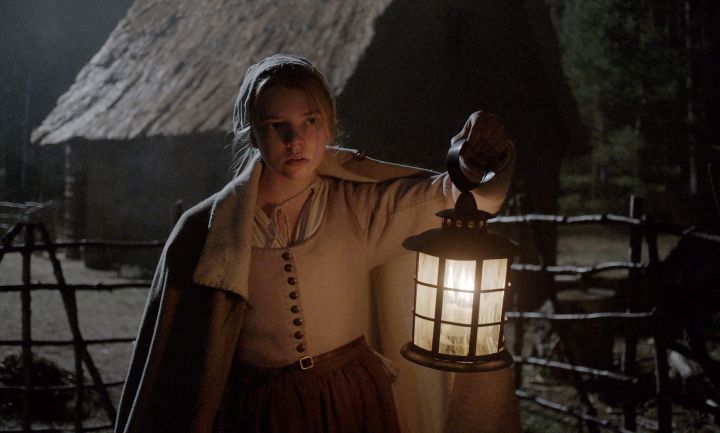 Anya Taylor-Joy has cemented herself as the scream queen of our generation (much like what Neve Campbell was to the 90s).

Set in 1630s New England (back when folks were freaking the fuck out over witches), the film shows a family who fall victim to a terrifying witchy clan.

The film received critical acclaim and was a box office success, you’d almost think witchcraft was behind it. 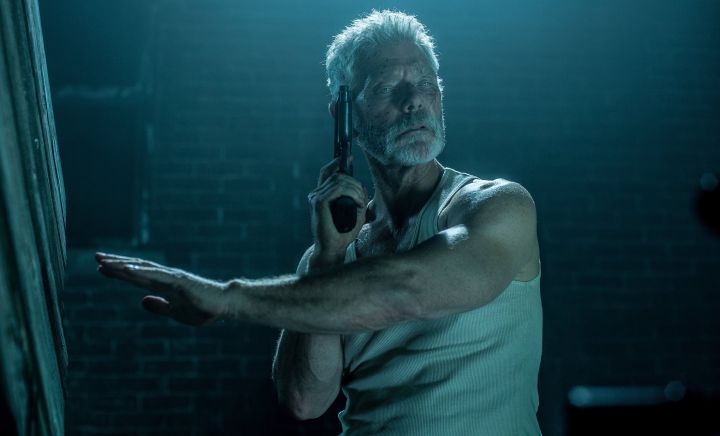 I remember attending the premiere of this flick back in the day and let me tell ya, it literally does what it says on the tin: you can’t fucking breathe for the entire movie.

The film is about a group of young thieves who break into a blind man’s home in the hopes of knocking off his fortune. They soon learn that the blind old coot isn’t quite as helpless as they thought.

Easily one of the best horror movies on Netflix right now, Don’t Breathe stars Jane Levy, Dylan Minnette, Daniel Zovatto and Stephen Lang as one of the most terrifying villains of modern horror. 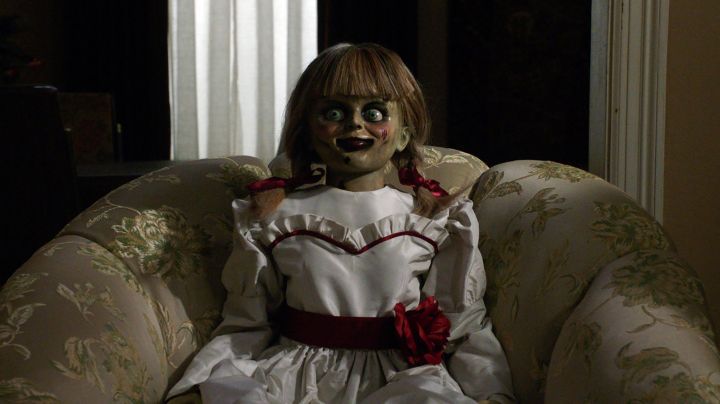 Your fave demon-fighting duo, Ed and Lorraine Warren (Patrick Wilson and Vera Farmiga) are back to battle the almighty beast that is the Annabelle doll.

In Annabelle Comes Home, their daughter Judy (Mckenna Grace) falls victim to Annabelle’s evil clutches and thanks, I hate it (love the movie, but hate that fucking demon doll).

The flick was written by visionary director, James Wan, who has helmed the entire Conjuring franchise, so you’re in safe but terrifying hands here. 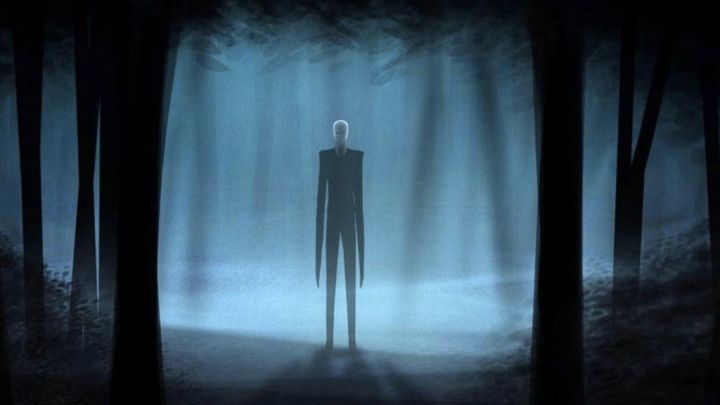 This 2018 supernatural horror flick, which was recently added to Netflix, brings your biggest nightmare to life with a boogeyman-esque creature named the Slender Man who terrorises a gang of teens.

Despite copping a bunch of bad reviews from critics, I was genuinely on the edge of my flipping seat for the entire movie.

It stars The Conjuring queen Joey King and Chilling Adventures of Sabrina mainstay Jaz Sinclair in a nightmare-inducing thrill ride. 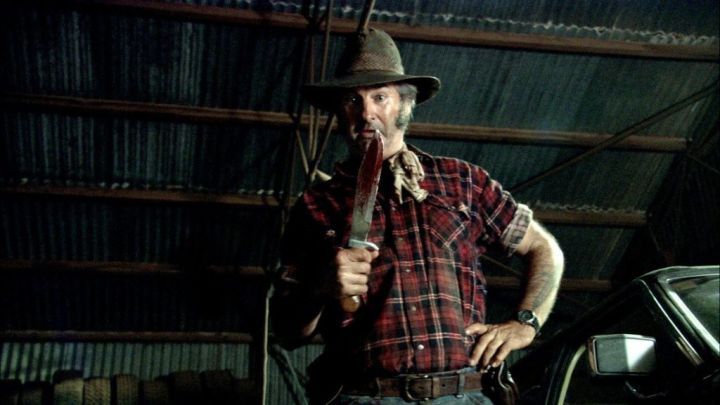 In this horror film fan’s not-so humble opinion, one of the scariest movies ever made (ever, ever, EVER) is Wolf Creek for obvious reasons: ‘cos it’s based on Australia’s worst serial killers.

Most of the flicks on this best horror movies on Netflix roundup have a supernatural component which, don’t get me wrong, is still terrifying, but the fact that the murderer is basically a combo of real life killers makes the movie so much more chilling.

Wolf Creek tells the story of three backpackers travelling through the Aussie outback when they encounter a seemingly friendly rural man named Mick Taylor (John Jarratt) who offers to give them a hand. You can pretty much guess what happens next…

Based on the real-life backpacker killers Ivan Milat in the 1990s and Bradley Murdoch in 2001, this iconic horror flick has gained international notoriety in the horror film genre, receiving both praise and backlash for its “realistic and unrelenting depictions of violence,” via the Chicago Sun-Times.

The second flick is now streaming on Netflix, and the first movie and its accompanying series is on Stan. 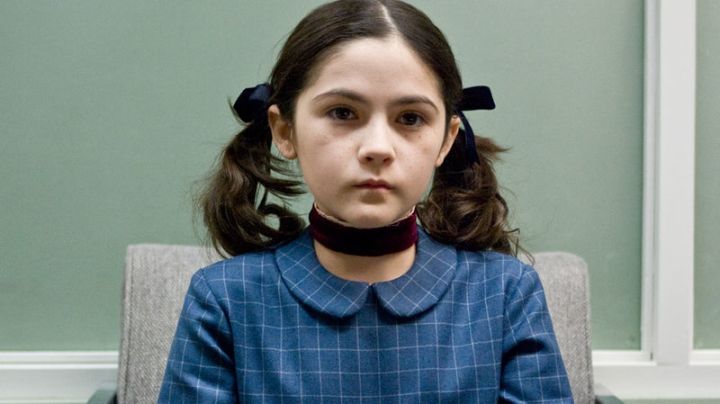 I can’t really tell you too much about this one without giving away the wild-ass plot twist, but basically a couple adopt a strange little girl and soon realise that she’s not quite what she seems. That’s it. That’s all I’m saying. Just go watch it, and prepare to absolutely wet yourself, especially when all is revealed at the end.

The 2009 psychological horror film stars The Conjuring’s Vera Farmiga as well as Peter Sarsgaard as the parents who find themselves under attack by the seemingly sweet little girl they’ve taken in.

This one will fucking haunt you for years, believe me. 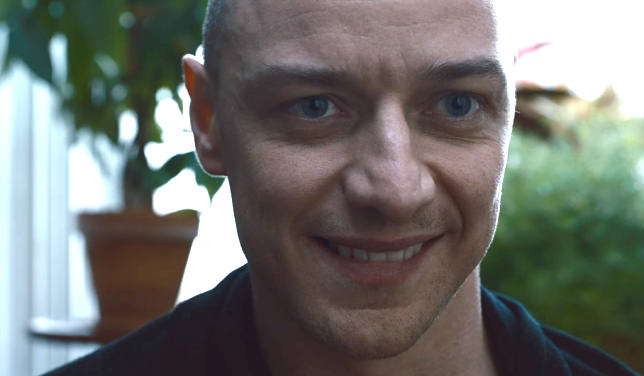 It: Chapter 2 star James McAvoy plays the tortured villain in this 2016 psychological thriller about a bloke with multiple personalities, one of whom is a psycho killer who kidnaps three teenage girls.

Split was a box office smash, copping rave reviews from critics plus a ton of awards and nominations.

The Hollywood Reporter even opined that it has “one of the most shocking surprises in cinematic history,” which is quite the fucking accolade, isn’t it? 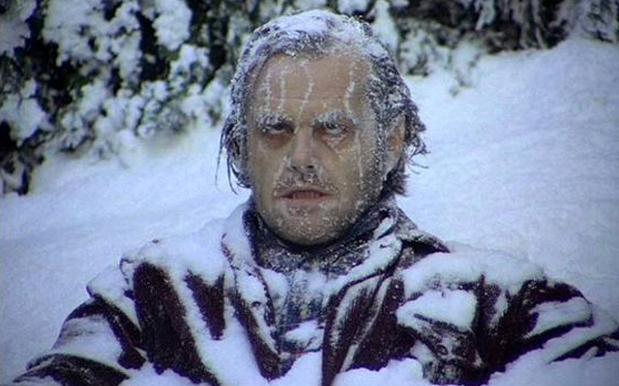 And last, but abso-fucking-lutely not least, the 1980 horror film that changed the genre forever, The Shining.

Starring horror movie icons Jack Nicholson and Shelley Duvall, The Shining tells the story of an aspiring writer and recovering alcoholic (Nicholson) who heads to a secluded retreat with his family, where he becomes possessed and goes absolutely bonkers.

Ya know the line: “Hereeeeeeeee’s Johnny!” This is where it’s from. It’s been used with ‘yumour ‘cos of the Shining parody on The Simpsons, but it’s actually freaky as fuck.

Here’s the scene below for a taste of what you’re in for: 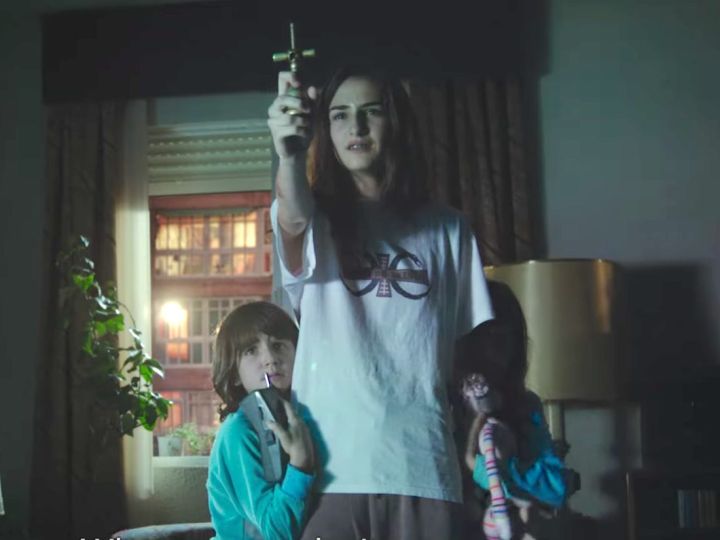 Get this: it’s loosely based on true events from the 1991 Vallecas case where Estefanía Gutiérrez Lázaro died mysteriously after she used a ouija board. 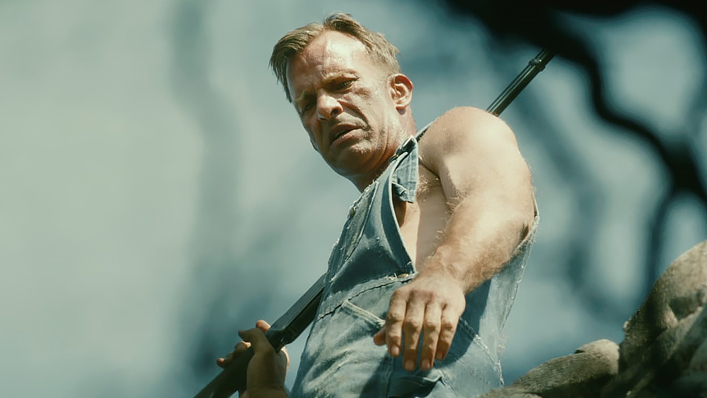 A 2017 American horror movie, based on Stephen King’s 2010 novella of the same name.

1922 takes place in 1922, funny that, and tells the story of a farmer who conspires to murder his wife for $$$ and even convinces his teenage son to help out. 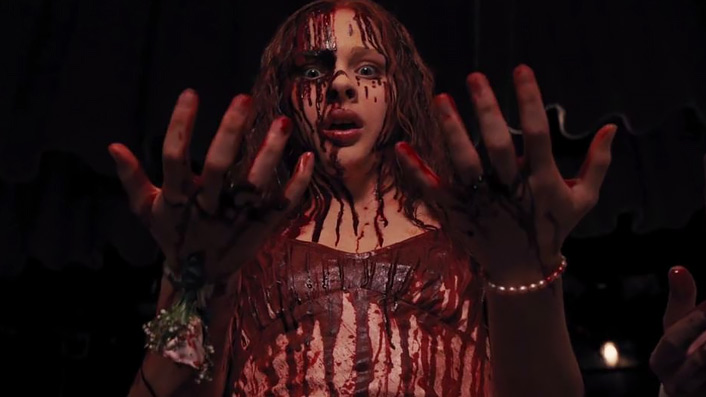 The remake of the hit horror film, Carrie, stars Chloe Grace Moretz as the troubled teen who develops telekinetic abilities and kills her classmates at the formal.

All of these Netflix horror movies are now streaming so go forth and binge away. If you’re a gigantic wimp and would prefer some very un-scary new Netflix series to watch instead, check out our guide right HERE.