Friends, it’s been literal weeks since I first watched The Princess Switch: Switched Again and I can’t stop thinking about how dumb it is. Don’t get me wrong, I LOVE dumb Chrissy movies. They’re my bread and butter during the festive season – I force all my friends to watch them with me. I LOVE THEM. But, the Easter egg in The Princess Switch: Switched Again makes literally no sense in the Netflix Holiday Movie Universe, and it makes me SO MAD. Strap in.

If you’re unfamiliar with Netflix’s Holiday Movie Universe, here’s the gist: Netflix has hidden a slew of Easter eggs within its Chrissy movies, which link all the movies together.

Up until very recently, the universe made sense. The streaming giant even provided fans with a flowchart, detailing all the cheeky Easter eggs.

I’ll go through some of the main connections later, but here’s the gist of how it all worked.

Again, this is before the Princess Switch sequel happened. 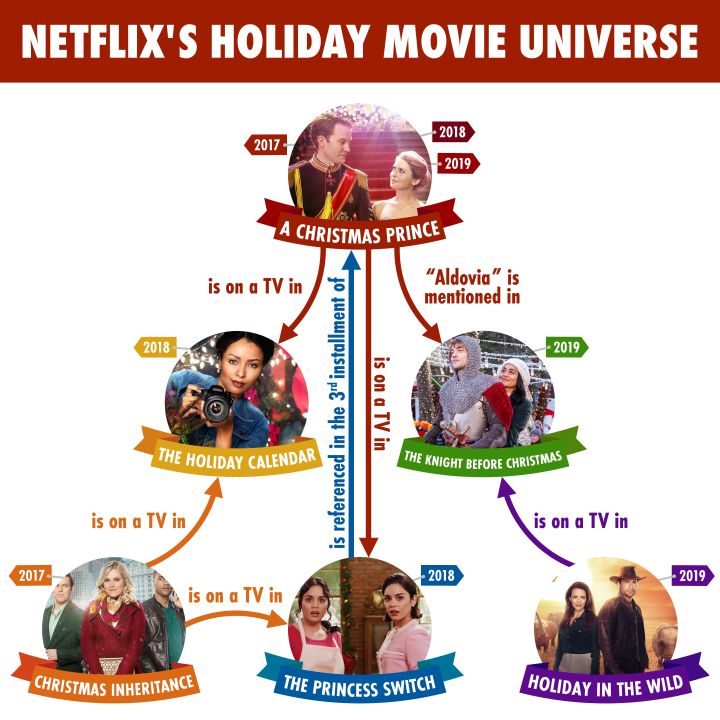 Not included on this chart is the 2020 holiday rom-com Operation Christmas Drop. There is supposedly an Easter egg in that movie too, but I didn’t notice it. I barely got through the movie, it was just… eh.

According to Netflix, the ~ universe ~ started when producers needed to include a movie within 2018’s Holiday Calendar.

“It felt like a natural fit to show one of our other films available on Netflix,” Amanda Phillips Atkins, EVP at production company MPCA, said.

MPCA produced Christmas Inheritance, The Holiday Calendar, all three Christmas Prince movies, The Princess Switch, Holiday in the Wild, and The Knight Before Christmas.

“That one seed of an idea soon turned into [a] fun opportunity to tie the various worlds together with small Easter eggs from movie to movie,” Atkins said.

This baby first exploded onto screens back in 2017, and then it birthed two sequels in 2018 and 2019. It is arguably the movie that put Netflix on the map for fun and dumb Christmas flicks.

I’m sure you’ve already seen this, but the gist is Amber (Rose McIver), an aspiring journo, is put on assignment to get the scoop on Prince Richard of Aldovia (Ben Lamb). Blah, blah, blah.

I’m not watching A Christmas Prince again, but I’m pretty sure giant acorns are a big deal in it. Like, Richard’s dad hid his very, very important will in a giant acorn ornament. Don’t ask me why, I don’t remember.

I do remember sighing real hard, though. 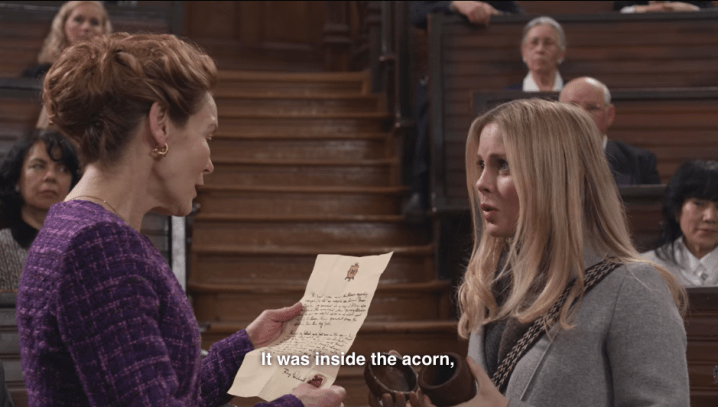 It was INSIDE the acorn!!!

The Knight Before Christmas

This is one of many Netflix Chrissy movies with Vanessa Hudgens in it. She shan’t be stopped!

In it, a time-travelling knight journeys to the present day to complete a quest. The quest is love, of course.

Anyway, at some point in the movie, Hudgens’ on-screen sister Madison (Emmanuelle Chriqui) gives her kid this giant acorn ornament to hang on their Christmas tree.

Giant acorn, you say? Where is that from?! A Christmas Prince!

So, we know The Knight Before Christmas and A Christmas Prince are set in the same world. 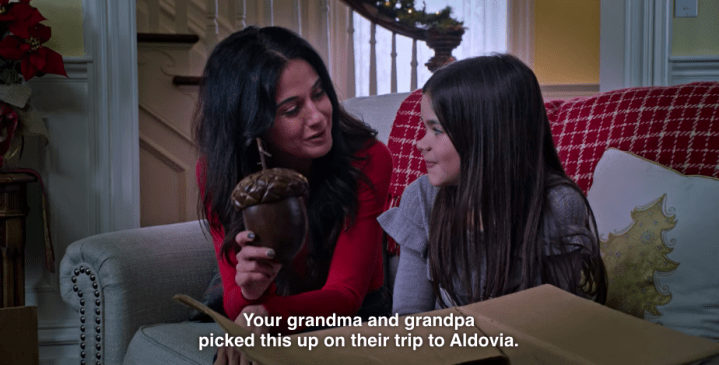 A Christmas Prince: The Royal Baby

I bloody loved the third movie, it’s SO DUMB. A very pregnant Amber and Ben have to race against the clock to find this priceless artifact, otherwise their baby will be cursed forever. DUMB.

While on the hunt, viewers cop a look at this very old map which showed how close Aldovia and Belgravia are to each other.

Belgravia is where The Princess Switch is set.

“We planned to branch out from just having our characters watch each other on TV,” Atkins said, per Netflix. “We thought it would be a great opportunity to build out a whole universe, not just for Aldovia but for the whole world of our Christmas movies!” 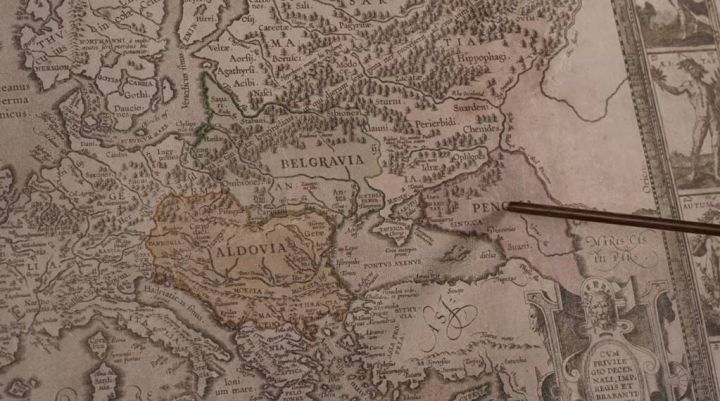 At the time, I probably should have clocked that this didn’t make much sense, given what I’m about to talk about next.

Vanessa Hudgens and Vanessa Hudgens star in The Princess Switch, in which two lookalikes switch places. During one scene towards the end of the film, Margaret (Hudgens) and Kevin (Nick Sagar) enjoy a cosy night in. They decide to watch A Christmas Prince together, as you do.

But then in The Princess Switch: Switched Again, Amber and Ben – the literal characters from A Christmas Prince – are in the sequel.

They appear at Margaret’s coronation right at the end of the movie. It doesn’t even make a little bit of sense.

You just know whoever wrote this sat back in their seat, pursed their lips, then said, “Oh, fuck it” and wrote the characters into the same movie, EVEN THOUGH IT MAKES NO SENSE. 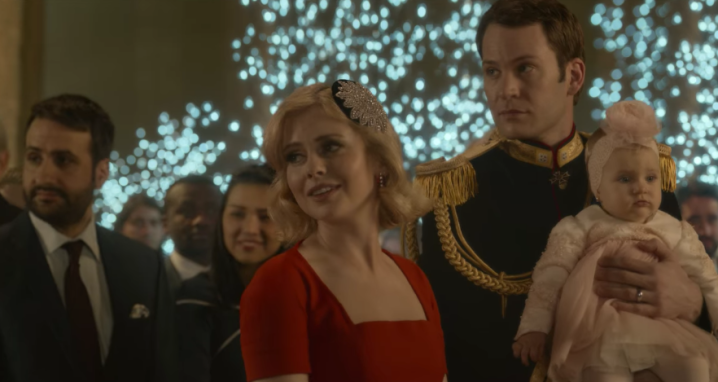 And look, I’m not the only confused.

then in the second Princess Switch movie, out today, they show up at her coronation

This entire thread is a whole-ass mood:

Not to mention, there’s a third Princess Switch in the works at Netflix as well. There is, I shit you not.

Sadly, Hudgens said a fourth lookalike isn’t in the cards. That would just be “too outrageous”.

“We’re already at max outrageous here with three characters, we’re just going to keep it at that,” she told The Wrap.

“And I would 100% lose my mind if I tried to add another me, even though it would probably be Scottish [and] I love that accent and it would be a great excuse to master the Scottish accent. But no, that’s not happening.”

Four Vanessa Hudgens would be too powerful, let’s be real.

Also, I’ve said it once and I’ll say it again: there’s going to be a male lookalike in the third movie. Like, Prince Edward (Sam Palladio) will have an evil twin or something.

While we wait for that work of art to hit Netflix, you can find all the movies I’ve mentioned on the streaming giant now.