Today TikTok temporarily banned one of its biggest stars, Addison Rae, and for a moment there, we almost shifted timelines to something less chaotic. Even though her account has since been restored, it’s still a major mystery as to why the celeb was banned in the first place.

Addison Rae, who has amassed over 85M followers on TikTok, shared to her Twitter today that she was ‘permanently banned’ from the app that made her a star due to ‘multiple violations of our community guidelines’.

She captioned the post ‘time to get a job’, and you know what, I respect that kind of humour in the face of everything you love falling apart. If Rae’s account really was lost forever, it’d be a major blow to not just her, but TikTok as well.

Well time to get a job pic.twitter.com/BJ4xDyFfko

For a brief moment there, anyone who tried to access Addison’s TikTok account was met with an empty page — zero followers, zero following and zero likes.

I’d hate to be one of the folks who really wanted to see Addison pull off a lacklustre dance to a modern pop hit, but couldn’t get their fix for the couple of hours that Addison’s account was down. 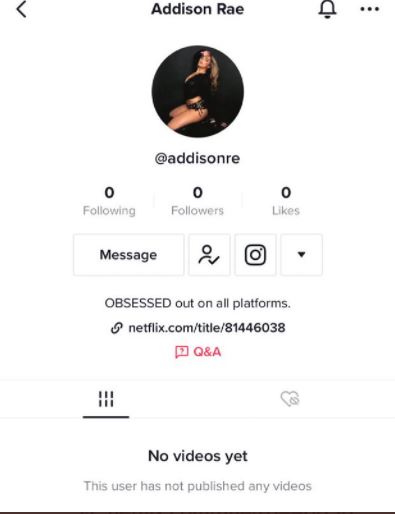 Now, if you head to the account, everything is back to normal. Nintendo sponsorships are all about, the TikTok dances are back in full swing, and pretty much every second video is an active reminder that yes, this 21-year-old has an empire. Netflix movie, Spotify singles, makeup collection, she does it all.

Some folks online are still speculating whether Miss Rae was removed by TikTok itself or simply had a bunch of haters falsely report her account into oblivion due to jealousy.

READ MORE
Surprise, The He's All That Film W/ Addison Rae Is A Flaming Pile Of Shit & The Internet Agrees

Here is the last post she made before she was kicked off the app temporarily, and if this was the thing that sent TikTok over the edge, then we really need to have a word about the shit straight men get away with without consequence.

Naturally, there were also memes about the celeb working at McDonald’s which we were gifted to us during her brief disappearance.

Addison Rae after getting banned from TikTok pic.twitter.com/r0zk1F5lv9

addison rae got banned off tiktok? someone tell her mcdonald’s is hiring pic.twitter.com/eZQg6eV2Pw

Until someone makes a statement of some sort, we’ll have no idea why Addison was banned in the first place.

But hey, she’s back, so go enjoy some arm rolls and hand claps while you can.