He’s had a lot of titles thus far in his career – The Big Aristotle, The Big eQuotatious, The Big Baryshnikov, The Big Cactus, The Big Conductor, The Big Field General, The Big Twitterer, and so on – but one title of Shaq that we’ve apparently missed up until now is The Big Baritone.

Despite being largely known and renowned for his basketball skills, Shaquille O’Neal also found the time in the mid-90s to be a founding and core member of the pop group *NSYNC.

For whatever reason, a cursory Google search for “nysnc members” returns Dr. Shaq himself as the baritone member of the group, completely erasing the presence of Joey Fatone – the BEST *NSYNC member thanks – in the process.

A follow-up search of Shaq himself reveals his original birth name of Joseph Anthony Fatone Jr, his original birthplace of Brooklyn, New York, and his history with the band as a baritone; a career which he maintained while also becoming the fifth-highest-scoring player in NBA playoff history. 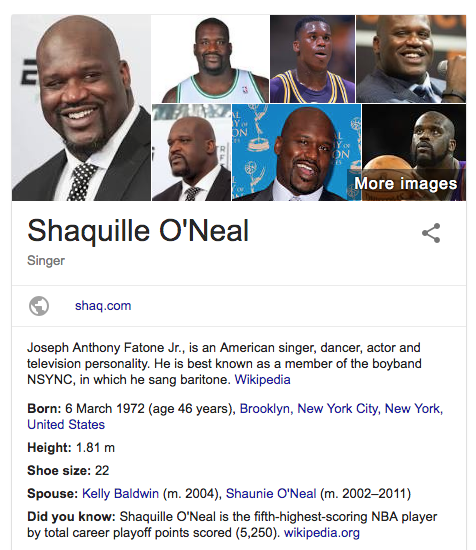 ‘Course the whole thing is just someone playing silly buggers with Google’s SEO functionality or whatever, and that person is probably chuckling away to themselves as the coverage on this prank keeps rolling in. Fair play to ’em, it’s a well-earned chuckle.

But here’s where it suddenly gets a bit interesting: As it turns out, there is a connection between Shaq and *NSYNC that stretches back to the origins of the group.

Lance Bass spoke to TMZ after the glitch went viral, and revealed that all the group’s early demos were recorded at Shaq’s actual house.

The story goes that Shaq, who in the mid-90s was both a) exceedingly rich, and b) a mainstay for the Orlando Magic, had a fully decked-out recording studio in his very large Floridian home (lest we forget that Shaq had a recording career all of his own which included his platinum-selling 1993 debut hip hop album Shaq Diesel).

Bass revealed that after the group formed in 1995, O’Neal let them use his studio to record their early demos thanks to a connection at their label.

The more you know. About Shaq.