It always seemed weird that the Bachelor In Paradise promos were never made available online. The trailers – which were for broadcast only, and therefore never made their way to the official social media channels – showed openly queer contestant Megan Marx kissing a long-haired person in the pool, with Megan’s voice saying, “She’s definitely my type.”

Everyone quickly jumped to the conclusion that was laid out for us by whoever cut that promo: that Meghan and Elora Murgher, another contestant, were going to hook up in Paradise.

But as we got closed and closer to the pool kiss, which was not a same-sex kiss at all, it became more obvious that Channel 10 was engaging in the scummy practise of queerbaiting: a promise of a same-sex relationship or storyline that never eventuates. No wonder the promo was never made available: people might have looked too closely before the big, disappointing reveal.

Megan has previously stated that she was “disappointed my sexuality was used as leverage”, and catching up with the 29-year-old this morning, it seems she’s still pretty frustrated by the whole thing.

“It’s a bit of a hard situation,” she said. “Obviously I wasn’t that impressed by it. My biggest concern was just that it was a little bit offensive to the queer community.”

But then she brought up the issue that didn’t really get talked about while we were all so mad about the queerbaiting: what about Elora? 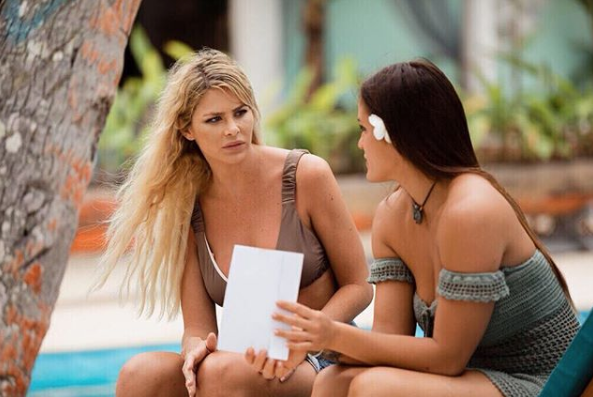 “I was worried about Elora,” said Megan. “She’s not publicly telling people, ‘I’m into girls’ or ‘I’m bisexual’, so it put her in a bit of a tough position, too.”

Elora has never made any public comment to suggest her sexuality is anything other than straight, and we’re absolutely not suggesting that, either.

Obviously, signing up for a show like Bachelor In Paradise means you’re signing up to have your image, personality, and potential love interests edited to suit the whims of the producers, but “outing” someone – or “fake outing” someone – crosses a boundary that the Australian franchise has not yet had to deal with.

Reaching out to Elora, the fire dancer said she didn’t mind at all about how the promos were edited.

“I did think it was pushing it, and a little inconsiderate to sell a false idea,” she said. “But I did not get bothered by the idea itself. In my opinion love is love and I am fully supportive of Megan, her sexuality and the community. I believe there are stronger messages in the editing. Not everything is what it seems, but in this case, broadcasting same sex love shows a great progress. It is not taboo anymore, it is, I hope, a subject that will now become a norm and not raise any different attention than heterosexuality.”

Megan told P.TV that she thought Elora handled the whole thing pretty well, and Elora agreed. “I was flattered, actually,” she said. “Megan is absolutely stunning, and I felt a little bit bad I was not fully aware of what was going on at the time. My only concern in this was protecting Megan. Her and Ali [Oetjen] became my diehard girlfriends on the show.”

Meanwhile, Megan and Jake Ellis are loved up and heading to Thailand for a two week holiday. Turns out, they never actually broke up – they just skipped the commitment ceremony.

“I don’t think either of us were ready for it,” said Megan. “The other couples had a bit more time without drama, whereas Jake and I…. you know, the week before I was hooking up with Tom.”

READ MORE
FYI: Megan & Jake Are 100% Still Together & “In Love” After ‘Bachie In Paradise’

After Thailand, they’re just going to figure things out. Jake is based in the Gold Coast, while Megan, originally from Perth, has been travelling for some 18 solid month.

“We’re going strong, and we’re off on our first little overseas trip,” said Jake. “And we’re excited about that, to get away for a bit and from the whole circus of the show, we sort of haven’t had a break just the two of us so we’re looking forward to that and, you know, taking each day as it comes.”

And Elora – who found herself in a love triangle with Apollo and Simone before leaving the show single – told PopSugar that about “a week after I got out”, she found love.

“He’s a beautiful man from Napoli,” she said. Instagram stalking isn’t getting us anywhere here but we hope they’re extremely happy.