After Harry Styles appeared on the cover of Vogue in a dress, right-wing commentators like Candace Owens and Ben Shapiro decided to make it their business, claiming the images weren’t just offensive but tarnished the very idea of masculinity. Here’s why they’re so wrong.

Not only did Harry Styles appear in a dress for Vogue, but he also gave an interview talking about why the freedom of clothing options for men fills him with joy. Apparently, this was something that right-wing commentators just couldn’t stand, and so they were compelled to comment. Happiness? In 2020? Please.

“There’s so much joy to be had in playing with clothes. I’ve never thought too much about what it means—it just becomes this extended part of creating something,” Styles told Vogue. 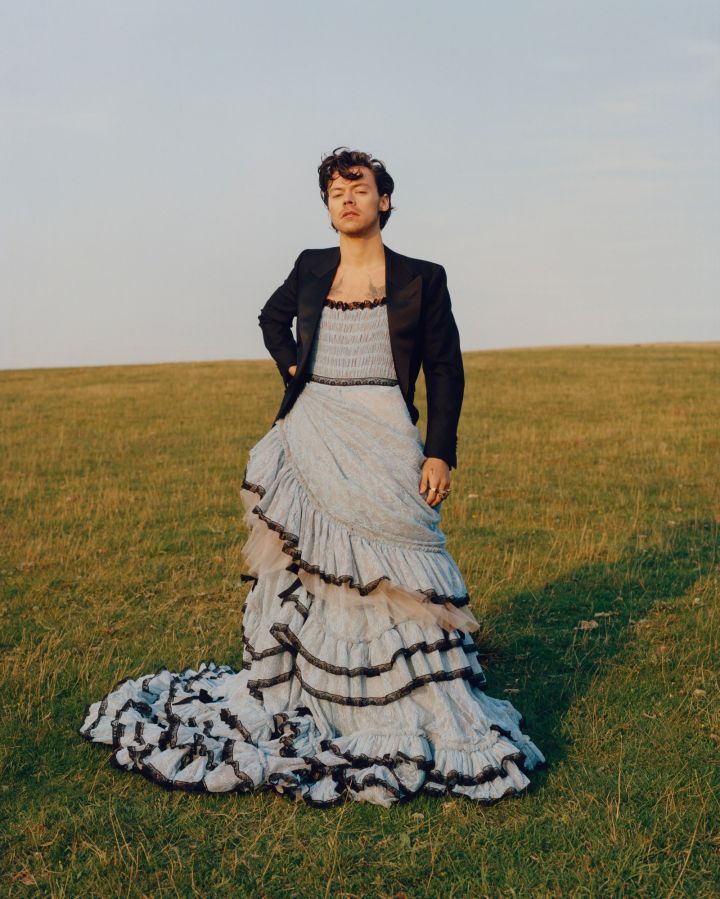 In response to his Vogue piece, Owens and Shapiro hopped online to voice hatred and vitriol.

In an attempt to not give them too much time, here’s a brief summary. Owens called the iconic dress look an outright attack on masculinity, calling for the world to “bring back manly men,” while Shapiro called it a “referendum on masculinity”, which is just nerd-talk for ‘men in dresses scare me’.

Sure Harry Styles is not the first man to ever wear a dress, given the sheer myriad of black and queer people that came before him (and oftentimes do it better). However, he is the first man to be featured solo on the cover of Vogue, and he did it in a dress. That speaks volumes, no matter what his sexuality may be.

READ MORE
Try Not To Cry For This Harry Styles Fan, Who Missed Meeting Her Idol 'Cos She Wasn't Home

On the contrary to what those in right-wing circles say, wearing a dress is probably the most masculine thing that Styles could do. It channels the power of queer trailblazers, it echoes the voices of iconic people of colour, it destroys notions of the binary that plague modern society, and puts a closer lens on how backwards we are when it comes to placing gendered ideas onto pieces of fabric.

Sure, it might be the former communications student in me jumping out, but I argue there’s nothing more masculine that a man can do than flaunt a piece of clothing on a worldwide platform that society deems they cannot wear.

The true identifier of anyone aiming to embrace ‘masculinity’ or ‘femininity’ is confidence. That’s all. And what is more confident than Styles owning and embracing non-typical clothing? What is more daring than offering a difference of opinion to the world while still identifying within a sexuality where such ideas are often frowned upon?

READ MORE
FUCK YEAH: Harry Styles Is Playing A Queer Cop Alongside Lily James In The Film Of Your Dreams

Thankfully for Styles, there were plenty of celebs who jumped in the firing line to defend him, raising the point that being ‘manly’ is quite literally whatever you want it to be.

in fact, it’s got nothing to do with it

Harry Styles is plenty manly, because manly is whatever you want it to be, not what some insecure, toxic, woman-hating, homophobic dickheads decided it was hundreds of years ago. He’s 104% perfect. ????????

Others pointed out how dumb it was for conservatives to even go after Harry Styles in the first place.

i couldn't think of a worse idea than going after harry styles on twitter.

And then some users brilliantly pointed out that the concept of men in dresses is not one that came about thanks to white men. There have been plenty of trailblazers in the past, from Prince to RuPaul and even our very own Keiynan Lonsdale.

Thanks to people like Styles, the world will become more adjusted to concepts and ideas that have been deemed normal and freeing in queer circles. He’s had the world’s heart in his hands for years, and is probably one of the perfect vessels for communicating an age-old message: that men can be whatever the fuck they want.

Ultimately, there is no ‘bringing back the manly man’ – they never left. They just got prettier.