The behind-the-scenes drama on Grey’s Anatomy is perhaps Hollywood’s worst kept secret, and in a spicy new book, the medical records are being unsealed (as in we’re finding out about the BTS tea, we’re not being privy to the stars’ actual medical records).

The book is by author Lynette Rice and it’s titled How to Save a Life: The Inside Story of Grey’s Anatomy.

One of the viral topics of the book is the allegation that Patrick Dempsey, a.k.a. Derek “McDreamy” Shepherd, “terrorised the set,” which led to the actor being ousted from the show, despite the fact that he was a lead character who had starred on the show since its inception.

Apparently Dempsey and the show’s creator, Shonda Rhimes, had a tumultuous relationship and in the end, producer James D. Parriott was brought in to help stage the OG star’s exit. 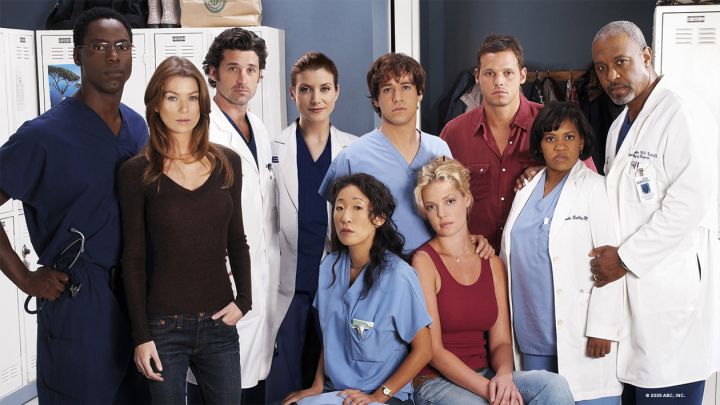 That’s Patrick Dempsey there, third from the left. The bloke with the luscious locks. Ya can’t miss him.

In an excerpt obtained by the Hollywood Reporter, the producer shed some light on Dempsey’s abrupt exit from the show.

“There were HR issues. It wasn’t sexual in any way. He sort of was terrorising the set. Some cast members had all sorts of PTSD with him,” Parriott alleged.

“He had this hold on the set where he knew he could stop production and scare people. The network and studio came down and we had sessions with them. I think he was just done with the show.

“He didn’t like the inconvenience of coming in every day and working. He and Shonda were at each other’s throats.”

The book even has a quote from Patrick Dempsey himself where he discusses his on-set behaviour.

“It’s ten months, fifteen hours a day. You never know your schedule, so your kid asks you, ‘What are you doing on Monday?’ And you go, ‘I don’t know,’ because I don’t know my schedule,” Dempsey complained.

“Doing that for eleven years is challenging. But you have to be grateful because you’re well-compensated, so you can’t really complain because you don’t really have a right. You don’t have control over your schedule. So, you have to just be flexible.”

Meanwhile in another excerpt, Jeannine Renshaw — who was another producer on the show — recounted how Shonda Rhimes “finally witnessed” the actor’s poor behaviour and it was “the final straw.”

“Shonda had to say to the network, ‘If he doesn’t go, I go.’ Nobody wanted him to leave, because he was the show,” Renshaw claimed.  “Him and Ellen [Pompeo]. Patrick is a sweetheart. It messes you up, this business.”

Unlike Sandra Oh and Katherine Heigl’s characters, who were peacefully written out of the show and therefore still have the capacity to return, Dempsey’s character was violently killed off in a car accident.

That being said, because Grey’s Anatomy is a bonkers fever dream of a series, McDreamy recently returned in a dream sequence after his missus contracted COVID. This show really is something else, isn’t it?