Heaps Of Women Are Claiming They’ve Hooked Up With Frazer Post-Show So What’s The Fkn Truth?

Truly no season of The Bachelorette has ever gone as batshit off the rails as this one, but despite the fact that it’s completely finished, it seems the drama just doesn’t stop rolling in.

This week, six anonymous sources hit up host Megan Pustetto on her So Dramatic! podcast with a whole smorgasbord of tea and receipts about Frazer Neate allegedly sleeping with other girls and sliding into their DM’s behind Elly Miles‘ back.

Now, of course, the whole thing is still up in the air as to how factual it all is, but God is it entertaining.

“Frazer has slept with a few people after the Bachelorette finished filming, he has not been well behaved, let’s just say that,” said Pustetto, reading out texts from the anonymous ‘witness one’.

“He has invited a few girls over to stay at his house since, everyone knows everyone and finds out everything in Brisbane.”

Truly spicy stuff. Pustetto then moved on to anonymous ‘witness two’, who was actually invited onto the podcast, but apparently turned it down due to wishing to stay anonymous.

“He was messaging me to have babies with him before he left for The Bachelorette, just days before,” said Pustetto, reading the messages from ‘witness two’.

Witness three submitted to the podcast a couple of ‘text message receipts’ between them and Frazer, but without seeing the images it’s hard to get the real gist of whether or not they’re legit.

Witness four kept it pretty simple, writing in to say “Yes, I did hook up with Frazer after filming… just tell Elly that he hasn’t been faithful and he never will be.”

God that is some tea if it’s legit.

Anonymous witness number five wrote in to say “So many of his friends have been saying that at the end of the season he was faking so hard to pretend to like Elly just for airtime.”

Meanwhile on Instagram today, Elly Miles has continued to answer fan questions asking if she and Frazer are still together. Apparently, everything is still sunshine and roses. 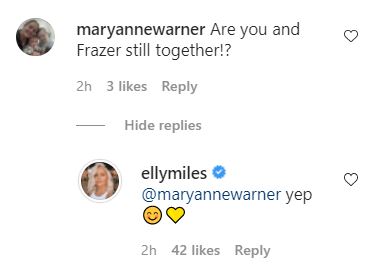 God this is a lot to handle. Guess we’ll have to take Elly’s word for it for now.