Married At First Sight’s Daniel Holmes has opened up about his breakup with fellow cast member Carolina Santos.

The reality star (and I say that charitably) spoke to So Dramatic! about the breakup. His notes-app break up post went up on Instagram just hours after Olivia Frazer and Jackson Lonie announced they were doneski via photo dump, which raised some eyebrows.

“It was a coincidence,” he said of the awkward timing.

“I wanted to make an announcement but felt pressure… so I think seeing [Jackson] do it pushed me over the line to get it over with.”

Daniel also revealed that while he used to be happy with Carolina, “no relationship is perfect”.

“It’s the best decision for now,” he continued.

“Who knows what happens in the future.”

Such polite and coy answers. What, no poop-slinging at each other post-breakup like a bunch of apes? It’s so unlike MAFS stars.

Daniel didn’t really give a reason as to why they broke up, though it’s worth noting his OnlyFans debuted just days before his break up was confirmed.

Carolina is yet to acknowledge the breakup at all.

ICYMI, Daniel confirmed he had split from Carolina on Monday, an extremely sinister day that will go down in history as the day that killed two relationships from the show.

To give credit where credit’s due for Daniel, however, there’s nothing like commemorating your dead relationship by sharing a statement you wrote on your Notes app. It’s got a certain je ne sais quoi and indescribable star quality to it.

“I’m getting bombarded so much atm considering all the articles out rn about the status of Carolina and I,” Daniel wrote.

“I think it’s been obvious for a while we have gone our separate ways. There’s no right way to deal with these situations.

“There’s a huge pressure to just hold off going public for as long as possible cause you know all the hate that’s gonna come.”

He went on to say he wished “Carolina all the best” and knew the feeling was reciprocated, before ending his touching statement with the sentiment that life had a “different plan” for them.

If “different plan” means being the 689th MAFS star to launch their OnlyFans account then sure, Daniel! You hold onto that thought.

The thing that’s quite interesting out of all this is the fact Carolina hasn’t addressed her former beau’s statement. When the break up was announced, she still had Daniel in her Instagram bio, though he’s since been removed.

Intriguing! Especially considering she is in London right now.

Did she know that Daniel was going to go full Notes app on our asses that day? Was she wandering around Selfridges, scrolling through Instagram, when she saw his post? Did she know that they were even over, seeing as he was still in her Instagram bio? 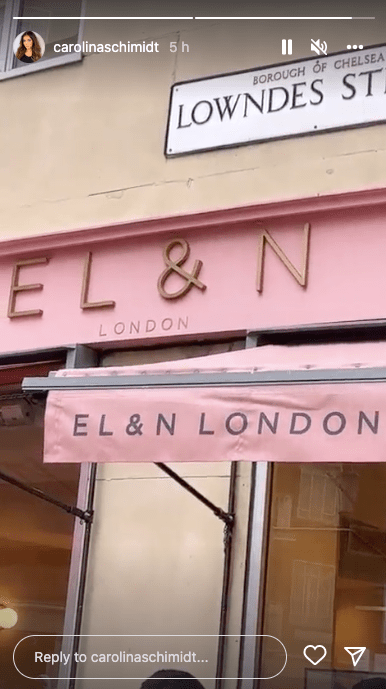 These are but questions I have no clue about. What I do know, however, is that it’s been a big week for people who love watching ex-reality TV stars call it quits. RIP Daniel and Carolina (and Olivia and Jackson)!