One year after Brooke Blurton and Abbie Chatfield fell out over The Bachelorette 2021, Blurton has revealed where their friendship stands.

During an Instagram Q&A, Blurton confirmed that the pair are no longer mates.

“I had a lot of respect for Abbie, still do, but as a friend, was really hurt by how she neglected our friendship,” she wrote.

She added that she “still values what she does in the media / social / advocacy work” but unfortunately, she “can’t look past” what happened.

Have a read of her full statement below: 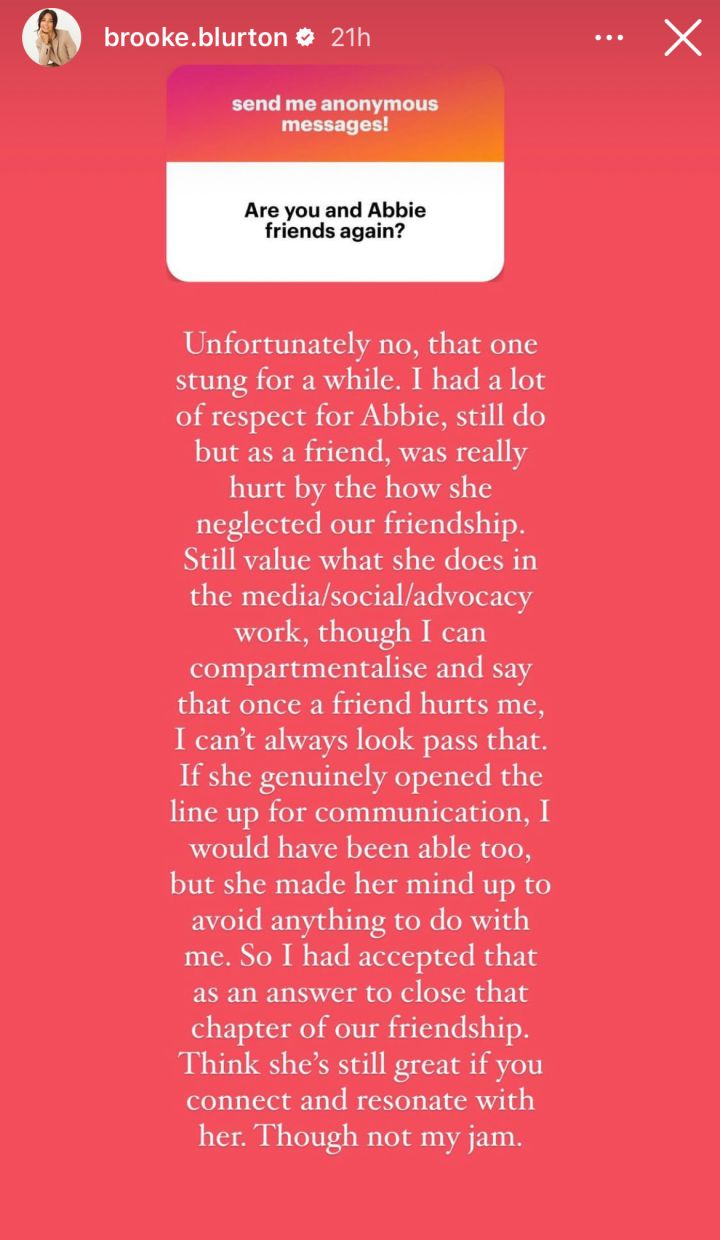 It comes after her recent comments on a podcast in which she revealed that Chatfield was not her first choice to join her on The Bachelorette finale.

“So a lot of people don’t know this, that my original friends, I guess who I had chosen specifically to be you know, my point of reference in that last decision making on The Bachelorette was Matty and Amy and I didn’t originally choose Abbie.”

She admitted that although Chatfield was great on the show, she “kind of got stuck” while deciding who to bring on.

“D and I just want to thank everyone for all the congratulation messages and beautiful warm, kind messages and thoughts,” she began, before saying she will be going “offline for this week”.

She said she’s “still grieving the death of my sister and when I put it in perspective to how long it has been, it’s been only two months,” adding that it’s been a “challenging” time for her.

“I’ve promised myself, Darv, my family and my angel sister that I’ll take the time to heal. It will take more than a week but this is a start.”

She went on to address “all the crap that came with finale week,” ensuring fans that she’s “not a hostile person” and does not “have hate in my heart.”

“Everyone who watched the show or was on the show will know that I put my heart and soul into it and it meant a lot for me to open myself up so vulnerably like that,” she said.

“Not only that but for what it meant for the LGBTQIA+ and First Nations Community to have that display of representation. Which moves me to my new point. The hardest point.” 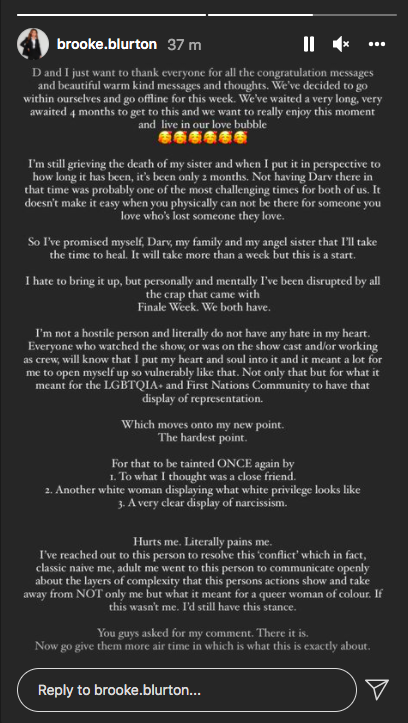 She then addressed an unnamed “white woman” and “narcissist” who she was close friends with who has “tainted” her Bachelorette experience.

“For that to be tainted ONCE again by 1. What I thought was a close friend. 2. Another white woman displaying what white privilege looks like. 3. A very clear display of narcissism,” she wrote.

“Hurts me. Literally pains me. I’ve reached out to this person to resolve this ‘conflict’ which in fact, classic naive me, adult me went to this person to communicate openly about the layers of complexity that this person’s actions show and take away from NOT only me but what it meant for a queer woman of colour,” she wrote.

“If this wasn’t me. I’d still have this stance.”

She concluded her note, writing: “You guys asked for my comment. There it is. Now go give them more air time, which is what this is exactly about.”

Although Brooke Blurton did not specify who she’s speaking of here, fans speculated that it may be Abbie Chatfield as she unfollowed the influencer after she went public with her relationship with Konrad while the show was still running, which copped loads of backlash from fans.