Abbie Chatfield just dropped a statement following reports that she and Konrad Bień-Stephen have split up.

“I’ve seen the articles about Konrad,” she began.

“He’s out of the country so I won’t be commenting on anything until he’s home. Can everyone not be so dramatic pls and relax.”

She added that “both of us are totally okay.”

She concluded by telling the paps to fuck off and let her have a coffee in peace, which is fair. 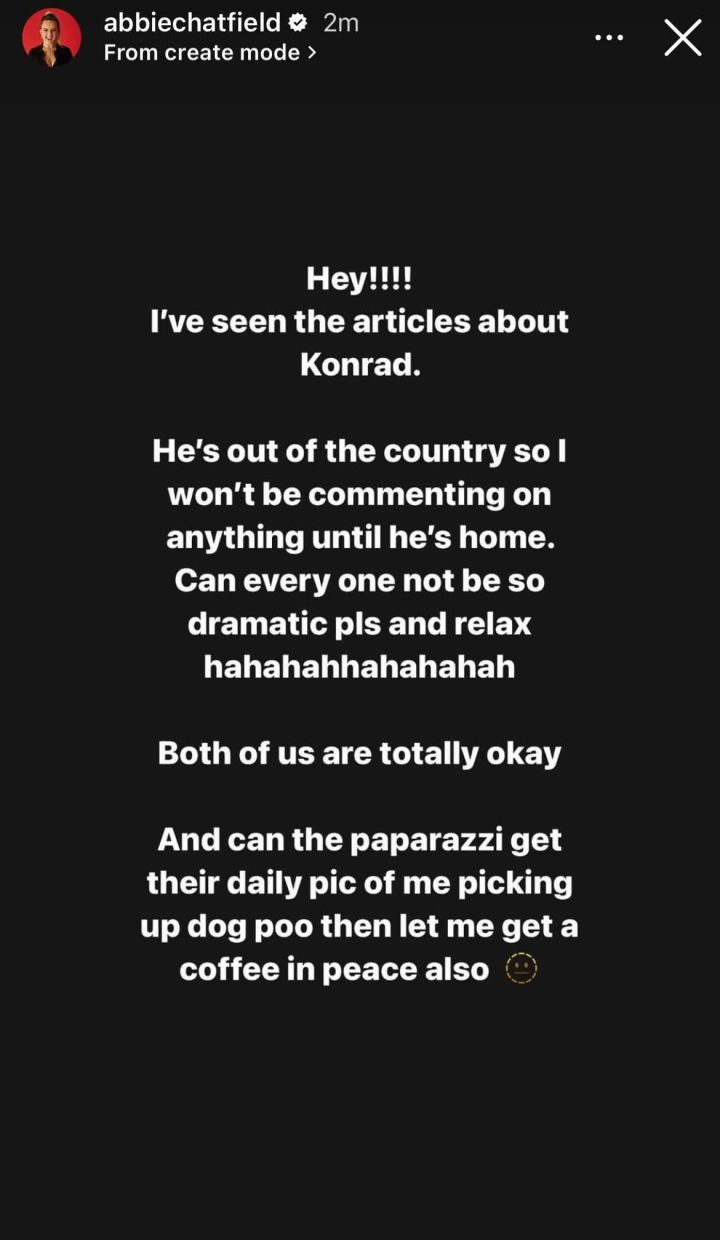 “Oh my gosh! The drama is insane, Konrad is sleeping with Megan [Marx],” the insider said.

“Konrad said he was single and his relationship with Abbie Chatfield was over because she broke up with him.”

The insider claimed the pair “hooked up” shortly after meeting on the set of The Challenge, which features a bevy of Aussie reality stars.

“On the first night of filming he hooked up with Megan,” they said.

“It was extremely awkward, because he was all over her the second we started filming. It was like he was trying to make Brooke [Blurton] jealous because she was there too.”

Apparently the series will feature several spicy affairs between the stars.

“There’s a lot of drama. People who are in serious relationships are rooting other people in a space of two or three days,” they said.

“The way they were telling us they were in love with their partners, and they can’t think of anyone else but them … it’s crazy.”

PEDESTRIAN.TV has reached out to both Abbie and Konrad for a comment.

The reality star couple, who were in an open relationship, began dating in 2021 shortly after Konrad was booted off The Bachelorette and have been peppering Insta with their cute couple pics ever since.

The competition show is basically a cross between Survivor and Ninja Warrior that puts ex reality stars through gruelling challenges.

It pits its contestants against each other, having them take part in wild challenges with the hopes of winning $1 million.