It’s honestly good as hell that we’ve finally convinced Cadbury to give Caramilk a permanent re-run here in the bowels of 2019, even if the blocks are as rare as hen’s teeth and causing some frankly outrageous re-selling behaviour on ye olde eBay et al. But in what’s clearly going to rank as a blow for white/dark fanatics out there, the Cadbury social media team just stomped all over any hope that the company might be bringing back fellow cult product Marble any time soon.

A flurry of reports circulating the various media traps today asserted that the chocolate giant, in their infinite wisdom, were suddenly not directly ruling out a Marble return. This was due to a Facebook punter demanding Marble be brought back, which was reportedly met with an official response of “never say never” from the Cadbury team, leading to speculation that a swirly return was imminent.

That, for what it’s worth, appears to have been a temporary shift in language by Cadbury’s social media team.

The “never say never” response was flung unto all manner of wild demands for former Cadbury products throughout the course of last week. The phrase even appeared on a request for the frankly reprehensible SnowFlake: an insidious white/chocolate variant that affronts every god.

Beyond insane that they branded that a Flake despite very bloody obviously being a Twirl.

This week, however, Cadbury’s official messaging has re-adjusted to being much more definitive.

When asked to bring back Marble again this afternoon, Cadbury responded point blank that Marble “will not be making a comeback.” 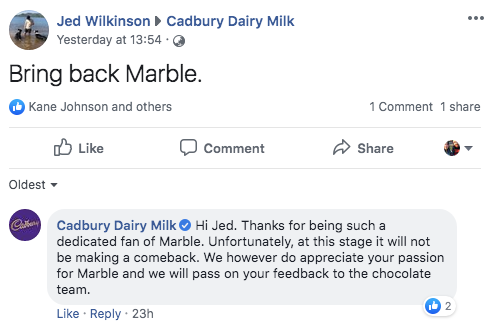 Not a lot of wiggle room in that, you’d have to say.

‘Course as far as the confectionary game goes you’d think Cadbury wouldn’t be so steadfastly opposed to making money hand over fist, so knows what they have planned for the future.

For now though, keep enjoying the horrible, Marble-less present we’re all living in. A real glass-and-a-half empty scenario, this one.