IT’S HAPPENING: Cadbury Marble Is Officially Making Its Return To The Choccy Aisle

UPDATE: IT’S HAPPENING, CADBURY MARBLE IS COMING BACK TO US.

Pure proof that there’s no justice like persistent Facebook group justice, Cadbury has announced that it’s bringing back the cult fave Marble chocolate in the next couple of months.

After the FB group ‘Bring Back Cadbury Marble’ spent the last few years petitioning, messaging, and letter-bombing the Cadbury offices with their pleas, Cadbury returned serve this morning and posted a letter of their own to the dedicated 20,000+ fans. 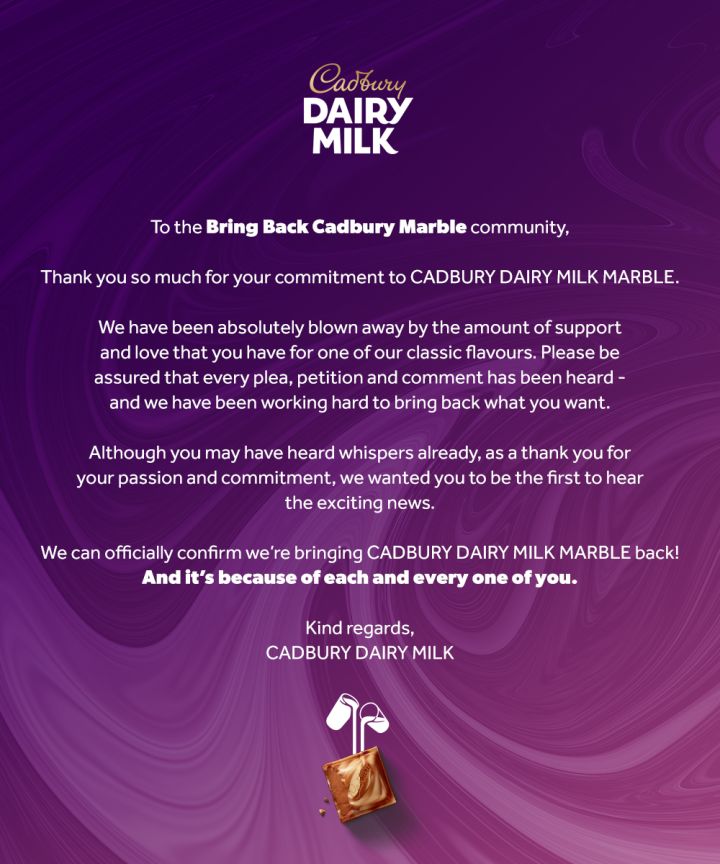 Though we don’t have a firm date on when that perfect block of dairy milk and Dream-swirled choc filled with hazelnut praline will hit the choccy aisle, keep your eyes peeled. It’s happening.

It’s been eight long, sad years since the sacred Marble chocolate was on our shelves. Yep, that cult-favourite block of marbled milk and white choc with hazelnut praline centre hasn’t been spotted since 2012, but it’s looking like it’s going to make a comeback this year.

First Caramilk, now Marble? Please, someone, tell me who at Cadbury I should smooch for this blessing.

The dedicated Facebook group that has been hounding Cadbury to bring back the blessed blocks has posted a couple of images over the last week, showing off ‘test batches’ and boxes of trial choc, and the over 20k members have been going off like a cut snake about it.

Ahh, look at that choc. That perfect marble, like it’s been cut and sculpted by the hands of Michelangelo himself. A sight for sore eyes, and I demand to be given some immediately.

The leader of Bring Back Cadbury Marble – who has previously been successful in getting Golden Gaytime ice cream into tubs – has spent the last few years incessantly (and creatively) sending letters to Cadbury, calling for the choccy to return to shelves.

On February 10, the group posted a recent (!) photo (!!) with a block of “new” Marble chocolate (!!!) and said that although there’s no firm date of it happening, Cadbury is bringing back the cult fave chocolate.

Seriously, what is his gift? Has he read The Secret a bunch of times and has it committed to memory? TELL ME YOUR SECRETS, MAN.

PEDESTRIAN.TV has reached out to Cadbury for comment because hot damn we are champing at the bit to know if our beloved Marble chocolate is coming back.

And now, we play the waiting game. Or Hungry Hungry Hippos.

Mr Cadbury, we got Caramilk, now we’re very likely getting Marble, so can you please hurry up and 1. put Snack in the bin and 2. bring back Breakaway blocks. This is my only request.