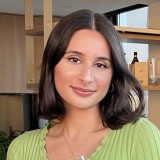 Saskia Morrison-Thiagu is an Afternoon/Nights Writer at PEDESTRIAN.TV. She is a reality TV addict, and in 2020 created and produced her own dating web series called Campus Cupid. Saskia also loves all things music, and has written album and live gig reviews for Beat Magazine and SYN Media.

Saskia is your go to for anything entertainment and pop-culture related, but she also dabbles in the art of meme-making. Her humour is borderline inappropriate, so you’ll often find her writing about anything from Christopher Meloni's ass cheeks to '2 Girls 1 Cup.'

You won’t be able to find her on Twitter, because it's a fake Ray Ramono fan account. But you can contact via any of the channels below.

Just Gonna Say It: Bring Back The Soul Patch

The 36 Y.O Man Accused Of Abducting Cleo Smith Allegedly Faked A Family On His Social Media

Hinge Has Introduced Voice Notes, Which Is Perfect For When I CBF Typing A Massive Paragraph

Casa Amor Is FINALLY Coming To Love Island Aus, So Here’s A Sneak Peek Of The Incoming Hotties

‘Kill Her’: RHOBH Star Dorit Kemsley Was Held At Gunpoint During A Traumatic Home Invasion

SPICY: It Looks Like 4 Bachelorette Babes Get Replaced By Intruders This Week & Pls Not Konrad