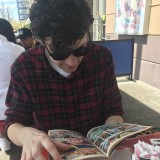 Chris Neill is an E-Commerce Editor who works across Pedestrian Group’s many titles, including PEDESTRIAN.TV, VICE Australia, Refinery29 Australia, Business Insider Australia, Gizmodo Australia, Lifehacker Australia and Kotaku Australia. He primarily writes about videogames and other nerdy topics, along with consumer and lifestyle technology.

Humble Opinions: The Best Earbuds On The Market If You’re Looking For Some Good Aural

Drafting The Looney Tunes I’d Want On My Space Jam Team From What’s Up Doc To That’s All Folks!

Ranking All The Fast & Furious Beefs Across 20 Years, From Street Fights To Betraying Family

All The Upcoming 2021 Game Releases You Need To Know, From Halo Infinite To LEGO Star Wars

The True Story Behind The Conjuring: The Devil Made Me Do It And Why You’ll Never Sleep Again

WIN: Tell Us Your Most Cooked Spooky Story To Win Tickets To See The New Conjuring Flick

Nanoleaf’s Iconic Light Panels Are $100 Off RN, So Time To Turn Yr Bedroom Into A Rave Cave

Vans Has Released A Where’s Wally Sneaker Collab And Uh Yeah There He Is, I Think I Found Him

WIN: Score A Sonos Soundbar So You Can Really Rattle The Walls While Watching The Mandalorian