Did Scott Morrison Shit Himself At Engadine Maccas In 1997? An Investigation

The internet might be full of filth and muck but there’s absolutely no denying it: Where there’s smoke, there’s fire. And for those of you fully plugged into the horrible Twitter website, one particularly pongy assertion has been circling the drain for days now: That Prime Minister Scott Morrison, in the hours after the Cronulla Sharks lost the 1997 Grand Final, wantonly and violently shit his pants at the Engadine Maccas.

Ridiculous? Perhaps at first. But after we begun pulling the thread, the shit became far runnier than we could’ve imagined. Being the responsible media outlet that we are, we investigated.

Like with all widely-spread allegations/cheeks, it’s important to zero in on the central dot. In this case, the origin of the story.

Scott Morrison shat himself at Engadine McDonalds after the Sharks lost the GF in '97.

This, by all accounts, appears to be the first appearance of the rumour on social media. The rumour that Scott Morrison absolutely loaded his pants up at Engadine Maccas after Cronulla lost the Grand Final in 1997.

At the time, Joyride provided further detail: That the amount of shit allegedly funnelled by Morrison into his own pants was large, and that the story had been verified by an unnamed friend who worked there.

Pretty bad I heard. My mate was working there at the time.

The story subsequently passed into oblivion, wafting into the breeze much like anything else posted to Twitter. However over the past handful of days, for reasons we can’t fully explain, it has resurfaced.

Ever since Morrison’s poorly-received interview with Waleed Aly on The Project, the rumour – that he shidded himself at Engadine Maccas in 1997 – has floated back to the surface.

This time, it caught fire.

Google trends data shows a huge and sustained spike in searches for the term “Engadine Maccas” from March 21st onwards.

That renewed interest has been fuelled largely by social media, which has been awash with people asserting the rumour is true.

Correction, it was after they lost the grand final

Scott Morrison shidded – and I cannot stress this enough – out his doo doo ass at – and please hear me when I say this – Engadine Maccas in 1997.

Hi Scott. Still waiting to hear back from you about whether it's true that you shit your dacks at Engadine Maccas after the 1997 grand final. The public have a right to know.

sorry to hear that our dullard fascist prime minister shat his pants at engadine maccas in 1997, prefiguring the grand public shart that is his political career. I guess that's just how it is on this bitch of an earth

say what you will about social media and technology, all i know is that if mobile phones and @browncardigan69 were around in 1997 at the Engadine Maccas then @ScottMorrisonMP wouldn't be PM now

Ahh, but you see, while the rest of us are merely playing checkers, Scott Morrison is shitting-himself-in-the-bathroom-at-Engadine-Maccas-back-in-1997.

I just a left a hipster coffee shop. It was packed with liberals, whispering amongst each other about the incident at Engadine Maccas in 1997.

The “Engadine Maccas 1997” phrase by itself has become shorthand; code for people whispering and/or strongly alluding to the rumour without going so far as to explicitly copy it out in full.

Just gave my name in starbucks as 'Engadine Maccas, 1997'. As the barista screamed out my 'name' repeatedly, the whole place erupted into applause.

the engadine maccas yarn is our bowling green massacre

Engadine Maccas, 1997. It started there.

The story, it should be noted, is unverifiable: Morrison’s office is unlikely to give the time of day to it, and Joyride refuses to delve any deeper into the matter.

What’s far more interesting to investigate, however, is whether it’s possible that Morrison fired turds into his undies at the Engadine Maccas in 1997.

Now there is some conjecture over whether the incident occurred following the Sharks Grand Final loss to Brisbane, or whether it occurred the week prior following their Preliminary Final victory over Canberra.

The latter seems slightly more plausible; that match was held at Shark Park, a mere 25-minute drive from the now infamous Engadine Maccas. 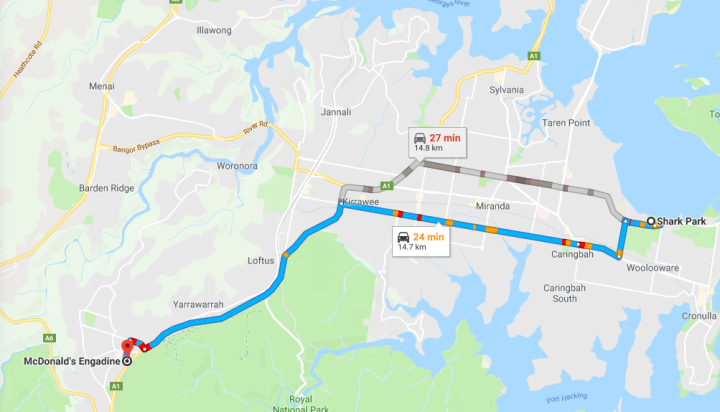 Of course it’s also quite possible Morrison was attending a Grand Final Day function at Sharks League Club as well, which would also put him within shitting distance of Engadine after the 1997 season decider.

Could Morrison have made a mad dash away from a big Sharkies final or function only to find himself caught short mere metres from the salvation of an Engadine Maccas loo? We certainly can’t rule that out at this stage.

But the question of why Engadine is rightfully on the lips of young and old alike. Why that location, when there are several McDonald’s outlets far closer to Cronulla’s home turf?

what absolutely no one can explain is there are three Maccas close to Shark Park – Kirrawee, Caringbah & Taren Point – why not there? It doesn't make any sense

It’s a fair point, and a well-made one at that. However that’s a query that was quickly answered by Twitter’s collective hive mind.

engadine maccas is a traditional place to stop for a quick shart on the journey between sydney and wollongong. he's not wrong for doing it

Could Scott Morrison have farded and shidded his pantaloons at Engadine Maccas while making a quick exit from Shark Park back to Canberra? Geographically, it makes sense. The stars – or sharts – seem to be aligning.

However another fair point raised in the ensuing shit storm posits that Morrison was deliberately targeting that very specific Maccas for the purposes of snapping one off in his jocks, given the location’s proximity to other suitably appropriate locations.

okay here’s some plot thickener for you: ScoMo was definitely driving on the Princess Hwy to get back to CNB. The last turnoff to get to Engadine Maccas takes him DIRECTLY past Engadine KFC. Assuming he was dying for a turd, why not stop there?? He *targeted* This Maccas. pic.twitter.com/1gCG7nd717

While it’s nigh-on impossible to ascertain in 1997 terms, it’s worth noting that Engadine Maccas is currently open 24/7, while KFC Engadine closes at 11pm on Saturdays. Assuming the Sharks game ended at around 10pm, and allowing 30 minutes to celebrate, exit the stadium, and get to a car, that leaves around 30 minutes to get from Shark Park to Engadine, meaning there’s a good chance the KFC may have been closed at the point Morrison arrived, batter on deck. Or at the very least they would not have been receptive to last-minute toilet loiterers.

In this instance, we can safely rule in Morrison’s favour: The highly alleged shit was likely neither targeted, nor malicious of intent.

That aside, the incident seems to have haunted the location; a cursory look at the Engadine Maccas Google reviews reveals a telling common theme. 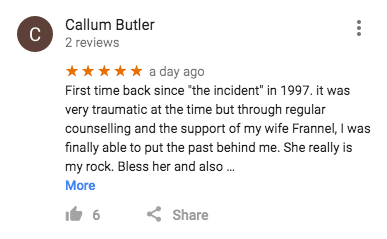 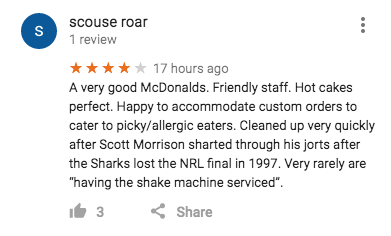 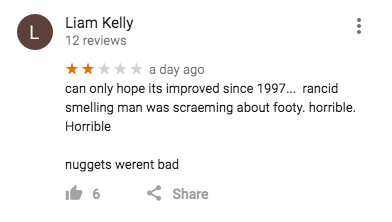 While it could be quite easy to hand wave all of this away as the inane nattering of a brain-poisoned few on Twitter, local anecdotal evidence remains ever present; evidence that suggests not only did Scott Morrison really fucken shit himself at Engadine Maccas in 1997, but that locals in the area have known about it for years.

So what conclusion can we draw from all of this?

Based on all evidence available to us, it is absolutely possible for the now-Prime Minister to have shit the crotch out of his dacks at the Engadine Maccas. His noted support of the Cronulla Sharks gives him probable cause to have been in the area on the day in question. And the potential motive for shitting oneself on accident at aforementioned Maccas (too many schooeys) is thick in the air.

But the bottom line here is that, despite the prevalence of the story over the past few days, Morrison and his team are yet to comment or face questioning on the matter.

And that, like the alleged skid marks in his alleged dacks, is perhaps most telling of all.

READ MORE
What Will It Take For The Government To Preference One Nation Last?