To say that it is absolute pandemonium on the internet at the moment, with everyone basking in the afterglow of President Donald Trump confirming he has COVID-19, is something of an understatement. It is fucking bedlam out there. No one can handle it. Social media is having a borderline meltdown. And yet it’s Telstra, of all people/things/places, that may have levelled the call of the day across the Tweet of the President.

To be clear here, Donald Trump getting COVID-19 isn’t fundamentally funny. It’s a horrible disease and he is, for all intents and purposes, apparently human. But on another, much more real sense it’s the funniest fucking thing to happen all year. It is – and believe me when I say this – SO funny. Ball-achingly hilarious, for so many reasons. The sheer amount of layers to this, you can barely comprehend.

So to that end, Telstra – or at least whoever is in charge of Telstra’s social accounts and is feeling particularly loose because the bosses all pissed off for lunch at 11:30 and don’t even remotely look like returning – has gone absolutely full throttle at the President’s rather unfortunate malady.

Don't even try and blame 5G for this. https://t.co/rmamU3mPIY

READ MORE
Trump Is Trying To Walk Back On His Proud Boys Call To Arms, But It's Already Too Late

In the event the Tweet gets deleted at some point soon – and because it’s such a good line that it deserves replaying – here’s a screenshot. For the archives. 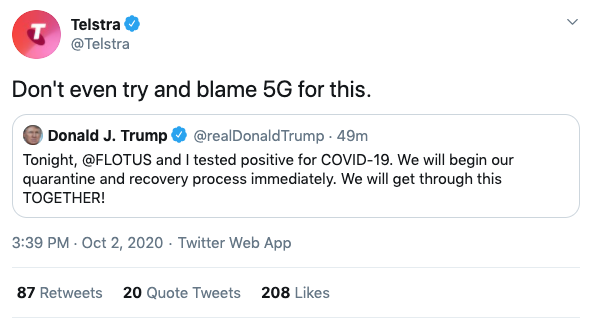 That is, and I cannot stress this enough, a spicy meat-a-ball.

‘Course the discourse that follows this revelation in the coming days is gonna be an absolute fucken mess, even here in Australia. The sheer number of takes – both ok and sizzlingly bad – are gonna be fairly overwhelming. Personally, I can’t wait for the hand-wringing from Australian conservative media – your Rowan Deans, your Chris Kennys, your Andrew Bolts and the like – chastising us for being so bold as to laugh at the President’s ailment.

To that there is but one definitive response: He’s not gonna kiss you, you sickos. No matter how bad you might want it.

Points to Telstra for this truly fantastic gag. What a golden, golden period we’re all in right now. Enjoy it while it lasts, mates.