Let’s deep dive back to the late 2000s when we were in the most iconic phase of our lives yet: the vampire era. When K-Stew and R-Patz were plastered over the covers of Dolly (RIP) and we all had that cringy Supré tee that read, “I kissed a vampire and I liked it”. Oh good, you do remember. During this time, many self-proclaimed Twihards devoured vampire literature, from the Twilight saga to Claudia Gray‘s Evernight series and of course, Richelle Mead‘s Vampire Academy books.

In the years to follow, “Young Adult Paranormal Romance” has dominated Tumblr (remember that?) and bookshops around the world. These narratives typically revolved around teenaged girls falling in love with gorgeous vampire boyfriends that were hundreds of years old.

The only vampire series that came even a smidge close to reaching the success that Twilight enjoyed was the Vampire Academy book series. This sexy, dark YA series followed the friendship between half-human, half-vampire guardian Rose Hathaway and her best friend, Lissa Dragomir, a pure-blooded vampire princess. Of course, there was a dash of sex, forbidden romance, evil vamps and danger that made it the Bloody Mary of the vampire literature cocktail that young girls were consuming.

The Vampire Academy series spanned six books and eventually resulted in a spin-off series called Bloodlines, which starred two side characters from the OG story. Then, that movie was released in 2014, starring Zoey Deutsch and Lucy Fry and look, I’ll go on the record and say it wasn’t that bad. But it was considered a flop, on par with the disaster that was the Avatar: The Last Airbender movie.

This time around, the Vampire Academy TV show will be executively produced by The Vampire Diaries alumni, Julie Plec, so we already know it’s gonna be good. 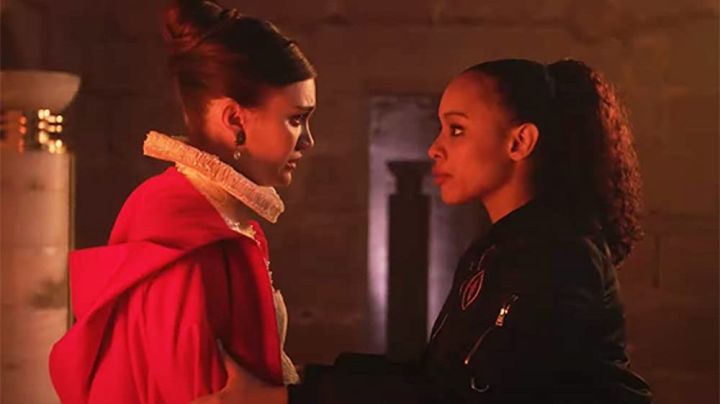 This TV series revamp of the Vampire Academy franchise is a Peacock original and is set to air from September 16 in Australia on Stan. Not too much is known about the TV show so far, but we do know its main cast. Our desert warrior princess, Rose Hathaway, will be played by Sisi Stringer and Moroi princess, Lissa Dragomir, will be portrayed by Daniela Nieves.

With its release only a coupla days away, now’s a prime time to reread this bloody good series or start it for the first time. To help you vamp lovers out, we’ve rounded up the Vampire Academy books from the OG series in case you’re fangin’ to read them in order.

Warning: The following contains potential spoilers for the Vampire Academy series so read on at yr own risk.

How to read the Vampire Academy book series in order

Rose Hathaway is not just a Dhampir (half-human and half-vampire), but she’s also the best friend to Princess Vasilisa “Lissa” Dragomir, heir to the royal vampire throne. The two girls have been on the run for the last two years after a tragic accident takes the life of Lissa’s family. After being captured by an intimidating and fkn hot guardian named Dimitri, the two are finally dragged back to their exclusive vampire boarding school, St Vladimir’s Academy.

St Vladimir’s is a hidden place where pure-blooded vampires (called Moroi) learn to control their magical elemental abilities, while Rose as a Dhampir must train if she wants to be placed as Lissa’s designated bodyguard once they graduate. Soon, both girls become entangled in forbidden romances and a ruthless social scene, all while trying to guard a dark secret that could tear them apart. And let’s not forget the evil vampires (called Strigoi) lurking off-campus, who desire to feed on our gal, Lissa and turn her into one of their own.

The events of this book are likely what we’ll see Season One of the Vampire Academy TV series focus on.

Our girl Rose has some serious boy trouble. She’s got the hots for her gorgeous, gorgeous tutor Dimitri, but it seems like he’s got his eye on someone else; her guy bestie has a massive crush on her and she keeps getting stuck in her best friend Lissa’s head every time she gets hot and heavy with her boyfriend, Christian. That’s amoré.

Throw in a Strigoi attack that puts the academy on high alert, Rose’s estranged mother popping in, a mandatory ski trip (ain’t life rough?) and suddenly, the life of our favourite butt-kicking Dhampir starts to spin wildly out of control.

Rose is only focused on two things when she enters her senior year at St Vladimir’s: pass her guardian exams and keep her budding relationship with her older mentor, Dimitri, a secret. The latter means keeping secrets from her best friend, something that’s pretty difficult when the two share one mind.

When danger strikes the academy once again, Rose is left to make a difficult choice between her best friend, the one person she is sworn to protect and the love of her life.

Dimitri has been taken and turned into a Strigoi, an evil vampire with a thirst for Moroi blood.

In the aftermath, Rose must choose between fulfilling her duty to Lissa, or keeping the promise she made to Dimitri that will force her to hunt him down if he was ever turned.

Rose has returned to St Vladimir’s and is preparing for her graduation, but she can’t stop thinking about the fact that she failed to kill Dimitri when she had the chance.

Instead, Dimitri got a taste of her blood (uh-oh) and now he wants to make her a part of her soulless vampire army.

Rose has been breaking the rules for a long time. Exhibit A: when she ran away with her best friend, the heir to the Moroi throne; exhibit B: when she fell in love with her older, hot AF instructor, Dimitri; and exhibit C: when she defied the queen of all vampires in defence of all Dhampir guardians to come.

But in the heart-stopping conclusion to the Vampire Academy series, Rose finds herself on trial for a crime she didn’t commit.

Newly-reunited with Dimitri and together with her ex, Rose must help Lissa in a power struggle for the throne and prove her innocence before the time is up.

The Vampire Academy TV series will premiere on Stan on September 15, 2022.