The Weeknd has been known to drop references to his love interests in his music, particularly his ex Bella Hadid, and in his new album Dawn FM, there may be a sneaky nod or two.

In his song ‘Here We Go…Again,’ The Weeknd sang about dating a “movie star”, which is likely a reference to his rumoured girlfriend Angelina Jolie.

Oh, and the Bella reference? We’re getting to that… and unlike Bella, it ain’t pretty.

In the lyrics, The Weeknd seemingly threw shade at Bella’s new relationship with her art director boyfriend, Marc Kalman, before praising his own GF, Ang.

Those lyrics sound all the more savage when you pair them with this fan tweet, featuring photos of Bella’s boo taking a bunch of pics for her: 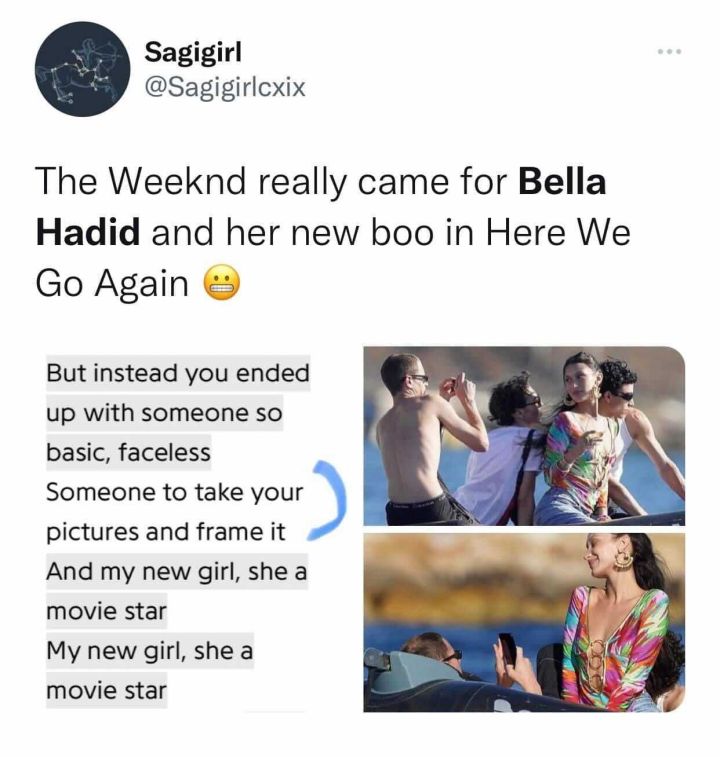 So not only is he calling out Bella’s “basic” new boyfriend (um, ouch!), but he’s also pretty much calling her superficial and shallow, poking fun at the fact that she always makes her man take pics for her. I mean, who doesn’t?

The part about her “girlfriend” trying to stitch her up with more famous dudes was intriguing. My guess is that that part was about Kendall Jenner or one of her other model mates.

Anyway, missed the Angelina Jolie and The Weeknd dating memo? Well, let us get ya caught up!

The pair were first spotted having dins together in June 2021, then again in September, where they were photographed leaving Giorgio Baldi in Santa Monica together.

The Daily Mail published pics of the pair together in The Weeknd’s SUV as they drove to his Bel Air home after dinner.

Despite all this, insiders close to the sitch told E! that their relationship is purely platonic.

“They are not dating,” that source said. “They have mutual interests and are enjoying putting their ideas together to see what they can come up with. They have been recently talking about partnering on a few humanitarian projects together. He loves talking about movies and the art form.”

Jolie and The Weeknd “have been enjoying each other’s company [but] they aren’t dating,” the source added. “He has been enjoying getting to know her and feels they have a formed a close bond.”

A second source told E!, “The Weeknd and Angelina met through mutual friends in the film and entertainment industry. They have a lot in common. They totally hit it off after their first meeting earlier this summer and have kept in touch ever since.”

Meanwhile, a source told Us Weekly that there’s definite potential for things to escalate between the pair.

“Both Angie and Abel [Tesfaye, The Weeknd’s real name] are telling people that they are just friends, but those who know them think something romantic is going on,” that source said. “Friends believe things could turn romantic.”

Jolie “is playing down talk of anything serious,” the source added, noting “she’s definitely warming toward Abel. He’s been pouring on the charm and going out of his way to impress her.”

I think writing a song in which he boasts about her film career and trashes her ex is a surefire way to impress her. I’m not being sarcastic, BTW. I’m sure she’d love that… #TeamAniston.

Anyway, have a listen to the song below: