Snoop Dogg, Hero Among Men, Lit One Up On TODAY & It’s The Best Thing I’ve Seen On Morning TV

According to social media, there are three types of chaos:

This morning, the rapper beamed into TODAY’s studio from what looks like his bedroom, where he lights what I can only assume is a doobie (bless up) as they chat. 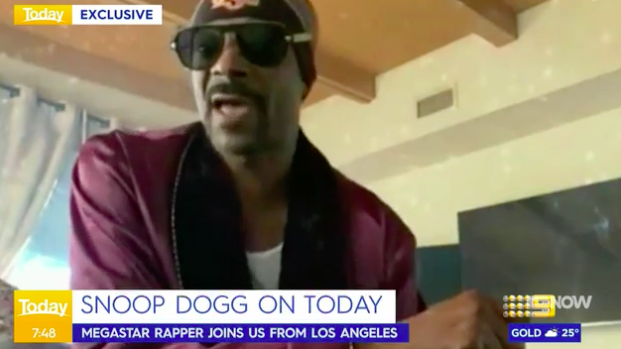 Notice the puff of smoke in the corner of the pic? We bloody love to see it. (Credit: Nine)

“Shoutout to everybody in the land Down Under,” Snoop Dogg says, before Karl begins regaling him with a yarn about meeting Snoop at a party in Malibu, LA way back when.

“You showed up like an apparition at night,” Karl says, “and the only party went lit.”

Lit. LIT. Yes, that’s the word Karl Stefanovic used on morning telly, before 8AM. Lit. We’ve now reached chaotic evil levels, but then Snoop Dogg professes his love for Australia and puts us squarely back in the chaotic good column.

Karl tells Snoop Dogg that he’ll defs be in the front row at his next Aussie show, but that doesn’t sit well with the rapper who then offers to take him backstage and I’m definitely gonna need footage of this.

Next up, they discuss Snoop’s god tier Menulog ad (you know the one), and Snoop reveals that the food delivery brand wrote the “funky” track for him, adding that it “was easy to get into it.”

Snoop Dogg reveals that tomorrow night during the State of Origin, he’ll be debuting a footy themed verse of the Menulog bop alongside a coupla NRL legends, only this time the rap was penned by him.

While discussing his love of food, Karl plugs the rapper’s cookbook which gets him all geed up to the point where he offers to invite Karl ’round to cook fried chicken for him.

But the chaos didn’t end there as Snoop then discussed his “dear friend” Russell Crowe. “We have some of the greatest times ever when we hang out,” he said. 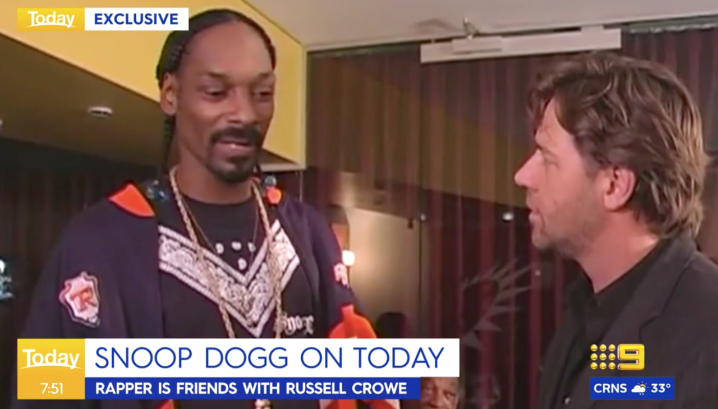 “He is one of the greatest ever dudes,” he adds, before quoting Gladiator.

Then, as the interview comes to a close, both Karl and Snoop sing the beloved Aussie bop ‘Down Under’ in unison and it’s… really something.

“Until we see each other in a real way, y’all stay strong, stay blessed, and keep some Snoop Dogg in your music system selection,” Snoop concludes.

It was way too much for my pre-coffee brain to handle, but look, it most certainly woke me up, which is a plus.

Catch the full thing below: