Margot Robbie called out the Hollywood Foreign Press Association’s (HFPA) speech at the Golden Globes which addressed their lack of black members.

Aussie queen Margot Robbie addressed the speech on her Instagram story and wrote: “Real change means not just standing on stage and saying it, but actually doing it. We look forward to the HFPA staying true to their promise.” 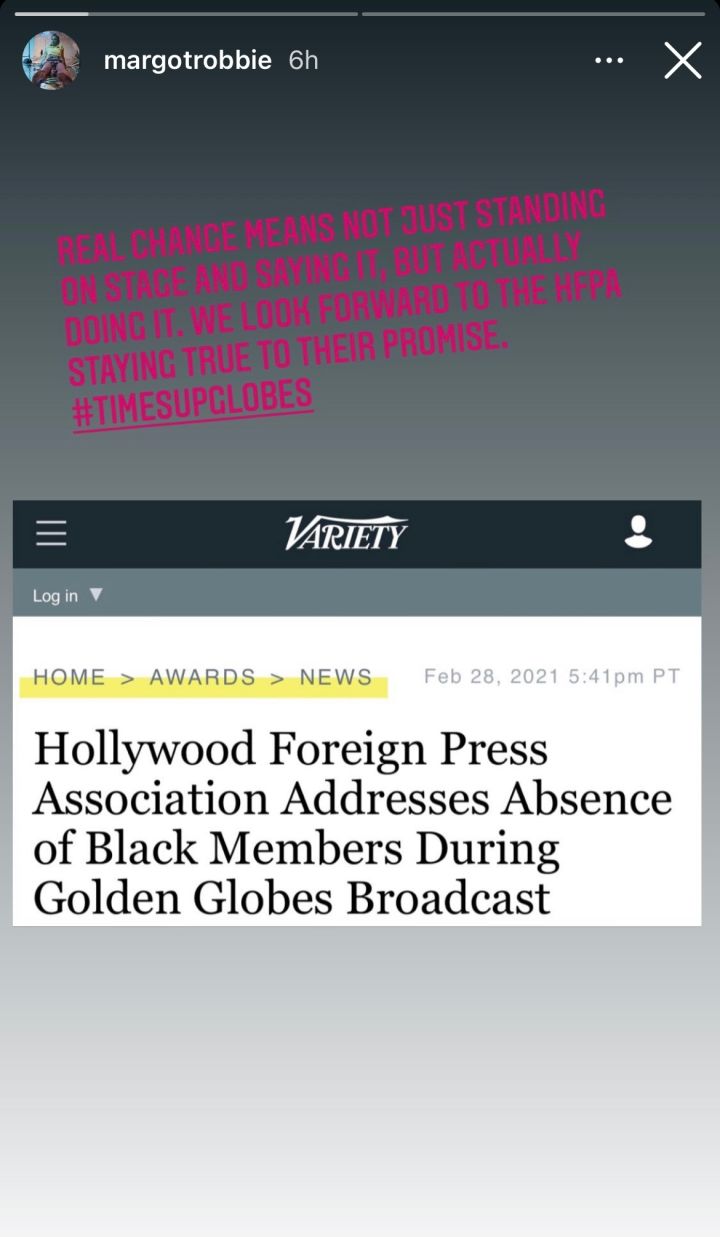 The Golden Globes came under fire this year (and every other year TBH) because of the lack of black nominations. A number of outstanding black performances films and shows were left out of this year’s nominations including, Michaela Coel‘s I May Destroy You as well as One Night in Miami, Judas and the Black Messiah, Da 5 Bloods and Ma Rainey‘s Black Bottom which were all ignored for Best Picture.

The lack of black nominations has put a spotlight on the HFPA, the group of 87 journalists who vote on the awards. The organisation doesn’t have a single black member, which is very concerning, but explains why The Golden Globes notoriously ignores POC.

“On behalf of the Hollywood Foreign Press Association, thank you for joining us tonight to celebrate the work of artists from around the globe, we recognise we have our own work to do,” Hoehne said.

“Just like in film and television, Black representation is vital. We must have Black journalists in our organisation.

Tatna followed: “We must also ensure everyone from all underrepresented communities gets a seat at our table, and we are going to make that happen.

“That means creating an environment where a diverse membership is the norm, not the exception,” Sar concluded.

However, Time’s Up, a charity organisation that launched the #TimesUpGlobes campaign called the speech a “cosmetic” commitment to change.

“Yes, the lack of diverse representation in your membership is significant and an embarrassment in its own right. However, it is only one of many concerns of inclusion and respect that have been documented,” Time’s Up CEO Tina Tchen said.

“The HFPA’s statements tonight and over the last several days indicate a fundamental lack of understanding of the depth of the problems at hand. Your stated version of change is cosmetic — find Black people. That is not a solution.”