Liz Sobinoff Says ‘Piss Off’ To Doing MAFS A Record 3rd Time & I Think It’s For The Best, Doll

Veteran MAFS star Elizabeth Sobinoff has denied reports that she’s returning to the show for the third time (fourth, if you count the upcoming Married At First Sight all-star reunion).

The rumour was cooked up by gossip rag New Idea who published a report yesterday, claiming that Lizzie was returning to the show in the forthcoming season following her split from Seb Guilhaus.

An insider told the mag: “It’s no secret Lizzie is very close to the show’s production team and Nine.”

Lizzie has said hell fucking no to these claims on her Instagram Story, and look, I reckon that’s for the best, aye.

“I’m not returning for another season of Aussie MAFS, so piss off,” she wrote.

Lizzie pointed out that “the show is filmed prior to airing,” telling theorists to “use your brains, I was living with my partner at the time, learning and growing.” 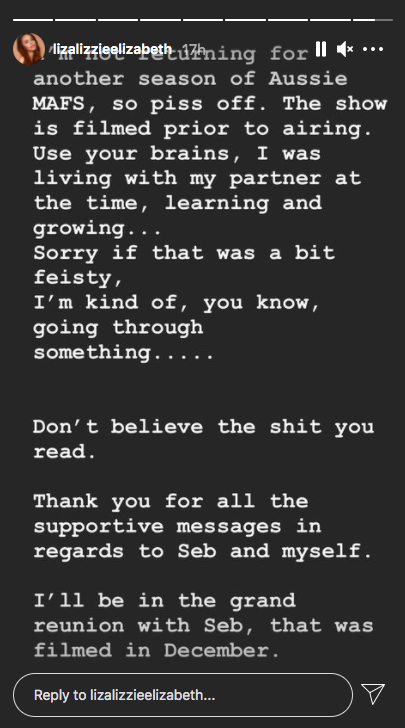 “Sorry if that was a bit feisty, I’m kind of, you know, going through something. Don’t believe the shit you read,” the MAFS star added.

She went on to thank fans for “all the supportive messages in regards to Seb and myself.”

“I’ll be in the grand reunion with Seb that was filmed in December,” she concluded.

Elizabeth first appeared on Married At First Sight in 2019 where she got hitched to Sam Ball and their marriage quickly went down in flames.

She later returned to the series as an intruder bride in 2020, where she married PT Seb and the pair were going well for a while, even appearing together on the recent reunion, before calling it quits.

Lizzie took to Insta last week to reveal that she and Seb had parted ways.

Peep the caption below:

We have mutually decided to end our relationship as boyfriend and girlfriend. We want to thank everyone for the endless support we have received on our platforms.

Please be kind and respectful. We are aware you have followed parts of our journey, but please remember we are real people, and we are both navigating our way through this time to the best of our abilities.

Naturally we are both aware there will be countless rumours and so on. Again, we are both navigating our way through this time so please be respectful and we won’t be allowing comments on this post. It is still fresh for us both, we just know there has been some curiosity as we have shared parts of our relationship online and we met on national television.

We are both respectful of each other and are still involved in each other’s lives. We both have cherished each other and have grown together.
We would like to send love and well wishes to all.

The MAFS reunion is set to air on Nine v. soon, which will be hella awks considering she and Seb torched their relationship shortly after filming the special ep.