Our queen Kris Jenner was, unfortunately, in the presence of peasants this morning as she was interviewed by shock jocks Kyle Sandilands and Jackie O Henderson on the Kyle & Jackie O Show.

The interview literally kicked off with Kyle telling Kris that he “nearly shat the bed” after watching the Keeping Up With The Kardashians finale promo. Nice Kyle, nice. How dare you use such foul language around OUR queen.

Kyle then says that he has a “bone to pick” with Kris, and in particular Kourtney Kardashian, as he blames her for the show coming to an end.

“We said at the very beginning that if one of us didn’t want to do it anymore, then we had to have respect for that,” Kris Jenner said.

She says that deciding to wrap up the show was a “wild” and “hard decision.”

Kris Jenner then reveals that she was the one who came up with the idea to end the show because she was “offered another cycle of our show from our network so we had to make a decision” and apparently the fam decided that the offer wasn’t great enough.

Kyle then went IN on the questions about Kim Kardashian and Kanye West’s divorce and Kris seemed a bit peeved at the mention (I’ll bet you dollars to donuts that she asked them not to bring Kimye up beforehand but, ofc, they ignored her wishes bc they suck).

“I think it’s always going to be hard, there’s a lot of kids and Kim and Kanye,” she said. “All I want is for those two to be happy and for the kids to be happy.”

“I think we all want that for our families. It’s just about the love and appreciation of each other and I hope everyone’s okay.” 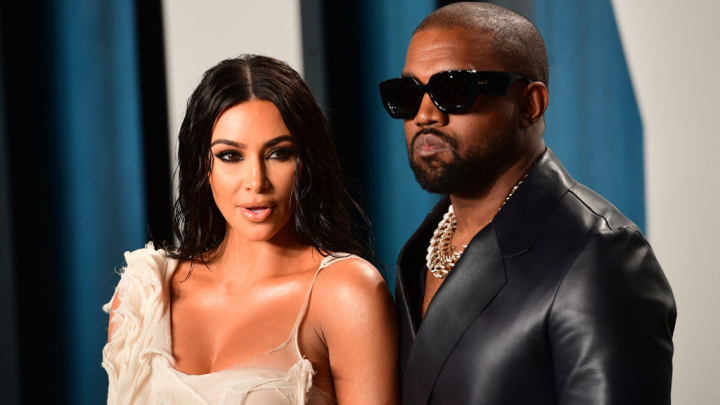 Kim Kardashian and Kanye West ahead of their divorce. (Credit: Getty)

Jackie O also asked if the divorce will be featured on the final season and Kris Jenner said that it “might” be, but she’s unsure as she hasn’t seen all the footage yet. Although she says that it’s a very “private” time for the family, so who knows how much of it will end up in the eps.

“When she feels like it, I’m sure she’ll say whatever she has to say,” she said.

Kyle then told her that he’s trying to get Kourtney Kardashian and Scott Disick back together and pls mate, she’s with Travis Barker now. Leave them be.

“They’re gonna have each other in their lives forever so he’ll always be part of the family,” she said.

When Kyle brought up the wild shit that Scott Disick used to do, Kris Jenner says: “Wow, you’ve been watching way too many re-runs.”

“He definitely was [out of control back then],” she said.

And as for rumours that Khloé Kardashian and Scott Disick are secretly a thing, she shot that long-running theory down: “They’re great friends. Scott has such a great sense of humour, so does she, and nobody gets how funny they are.” She also said that her elusive son Rob Kardashian is “one of the funniest people.”

They also asked Kris Jenner about the infamous painting that North West painted that drew much criticism from the internet as folks didn’t believe that the kid actually painted it. Kris confirmed that North did, in fact, paint it as she’s been attending art class and is “one of the most talented young ladies.”

And finally, she managed to dance around the question of whether her not her boyfriend Corey Gamble is going to “put a ring on it” like a pro, which prompted Jackie to tell her how good she is at answering a question without actually answering it.

“Aren’t I talented? And they said we have no talent,” Kris Jenner concluded.

Watch the final season of Keeping Up With The Kardashians on hayu & E! from today.