Dom and Ella were on the show to talk about their new podcast Sit With Us. During the chat, Dom’s diagnosis of PTSD was brought up.

ICYMI, Dom revealed that after MAFS she’s been living with PTSD and had found herself being triggered by having to sit at dinner tables.

While they were discussing this on the Kyle & Jackie O Show, Kyle Sandilands butted in.

“Did you see Olivia jerking off mushroom dick the other day on OnlyFans?” he said.

Ella then asked how Kyle had seen the video and whether he paid for it.

Then, the footage in question was seemingly shown to Ella and Dom while they were on air.

“There he is, look, look. There he is and that’s her hand there,” Kyle Sandilands said.

Later in the show Sandilands and co-host Jackie ‘O’ Henderson had Domenica phone up her husband from the MAFS Jack Millar. During the call, the video was brought up again.

After the show went live, Olivia Frazer took to her Insta Stories to criticise the segment. She tagged the Kyle & Jackie O show’s official Instagram with the caption: “y’all are fucked”. 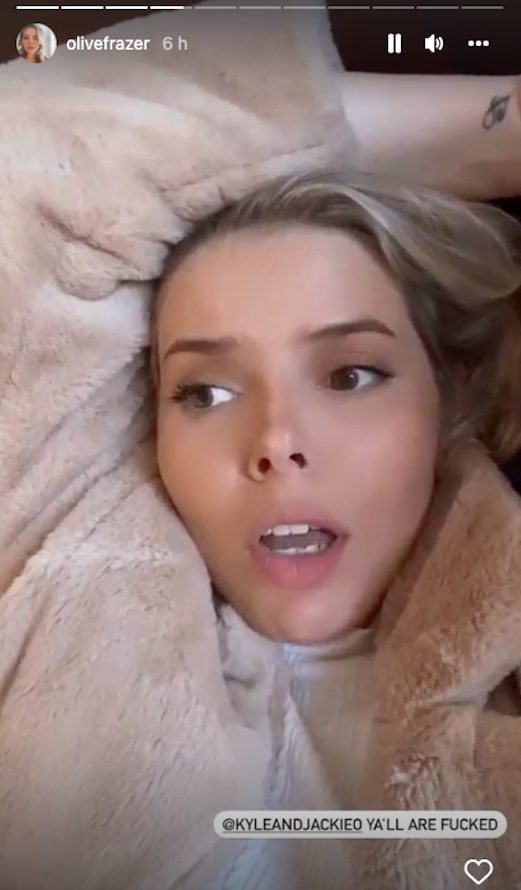 Olivia Frazer accused the show of distributing the video.

“Just me wondering why Kyle and Jackie O thought it would be a good idea to, you know, distribute mine and Jackson’s private video that is meant to be protected from behind a paywall,” she said.

She said the show had shamed and humiliated the couple over the OnlyFans video.

“Don’t you think it’s a bit hypocritical? Like isn’t that why everyone hates me — because I allegedly did that? I didn’t, but that’s what people think I did,” she continued.

Olivia Frazer then said the behaviour was “disgusting” and that “people should be ashamed of themselves”.

She also spoke openly about how much she has been struggling since the end of the show.

“I don’t need to be shamed and have more hate and vitriol perpetuated towards me, especially from arguably one of the biggest shows in Australia.”