Albeit they were holding hands on a rollercoaster, and you’ll probably wanna clutch onto whoever’s hand is closest when you’re hurtling through the air, but the fact that they’re on a cute theme park date together has naturally kicked off dating rumours.

In piccies obtained by People, Kimmy, 41, was snapped holding hands with the 27-year-old Saturday Night Live comic while on a rollercoaster at Knott’s Scary Farm in California.

It appears that it may have been a potential double-date as Kim’s recently engaged sis Kourtney Kardashian was also in attendance with her Blink-182 drummer boo, Travis Barker.

Apparently Barker and Davidson know each other through mutual friend Machine Gun Kelly.

Despite the rampant dating rumours that ensued after the pic (which you can suss out here), a source insisted to People they are “just friends.”

“They hang in the same circles so they will be together from time to time,” the insider said. “It’s just friends hanging out.”

Pete shared several scenes with Kim during her recent SNL debut. The pair even sucked face in one scene, where they were dressed as Aladdin and Jasmine: 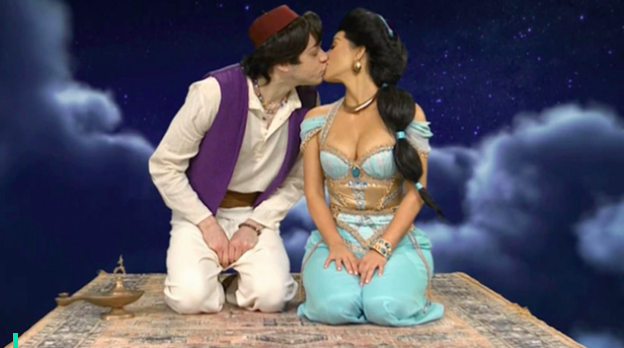 Kim and Kanye ended their marriage earlier this year, with the reality star filing for divorce in February. They started dating in 2012 and got hitched in May 2014, all of which was documented on the now-defunct Keeping Up With The Kardashians.

As for Pete, he recently dated Bridgerton star Phoebe Dynevor, but the pair split in August. He was previously engaged to Ariana Grande in 2018 (which is when his popularity grew exponentially) and has been ~romantically involved~ with Kate Beckinsale, Margaret Qualley, Cazzie David and Kaia Gerber.

So take this pairing with a grain of salt for now, as they very well might just be pals, as the People source insisted, but it’s certainly one to keep your eye on.