Iggy Azalea Has Been Accused Of Blackfishing Again & Pls Sis, We Know You’re From Mullumbimby

Surprise: Iggy Azalea, the queen of putting on an American accent and forgetting her Aussie bogan roots, has been accused of blackfishing *again* in her new ‘I Am The Strip Club’ music video.

Shortly after dropping the music video for ‘I Am The Strip Club’, many people online have called Azalea out for blackfishing – as she looks almost unrecognisable in a black wig and very dark tan.

You are telling me that THIS is Iggy Azalea? When will the blackfishing cease? When. https://t.co/kt2eXtPJSB

Others have argued that it’s not blackfishing, it’s just fake tan. Which is funny because by definition the term means: “using bronzer, tanning, Photoshop, or even cosmetic surgery to change their looks to appear Black or mixed race.” Sooooo, wHaT iS iGgY dOiNg tHeN??

Now, if you’re in the camp that also says: “it’s just fake tan, it’s not racist,” then I highly recommended reading this article addressing the complexities of fake tanning culture.

“White women who tan to change their skin to a colour that the world has told them is desirable, who fetishise the very brown skin that actual brown people are shamed for, are often reinforcing the same toxic (and honestly, racist) beauty standards that have excluded me from ‘brown’ beauty in the first place,” Soaliha Iqbal said in a recent article about fake tanning.

The ‘Fancy’ singer has defended her ‘tan’ on Twitter, and claimed that she was wearing the same foundation she always wears.

“I’m the same colour as I always am, just in a dimly lit room with red lights,” she tweeted. 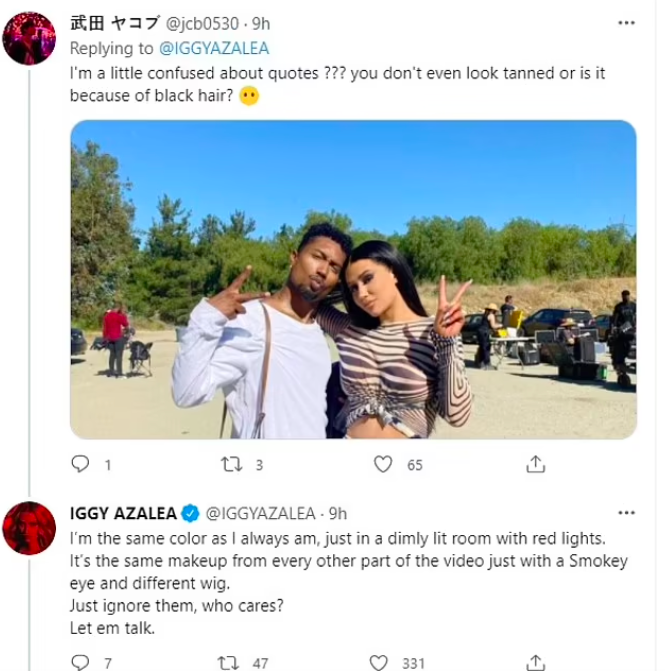 Looking at BTS photos from the shoot, Azalea does actually look lighter. So maybe we should turn our attention to the post-production team, who have clearly used colour correcting to make Azalea appear darker.

Blackfishing is a problem within the entertainment industry as a whole. Labels want to mimic the style of popular Black artists like Rihanna and Beyoncé, and Azalea’s management are capitalising on this.

But here’s why that’s wrong: Iggy Azalea can remove the black wig/tan and go back to being a white woman. Black women can’t, and must therefore carry the burden of oppression and racism – without the record deal.