Just Gonna Say It: The Knives Out Sequel Is The Best Movie Of 2022 & You’re In For A Fkn Treat

Fans have been eagerly anticipating the sequel to Netflix mystery film Knives Out titled Glass Onion: A Knives Out Mystery and for good reason.

The first one was an absolute banger. From the cast to the plot to the general aesthetic, the whole thing was a modern day Cluedo and we loved every minute of it.

And I’m pleased to report that its sequel is even better.

Yep, in my opinion, they’ve actually outdone the OG flick!

The sequel features a stacked cast, each of whom absolutely shine in their own ways.

The absolute stand-out for me is Kate Hudson whose portrayal of disgraced ex-model Birdie Jay had me absolutely howling in the cinema. 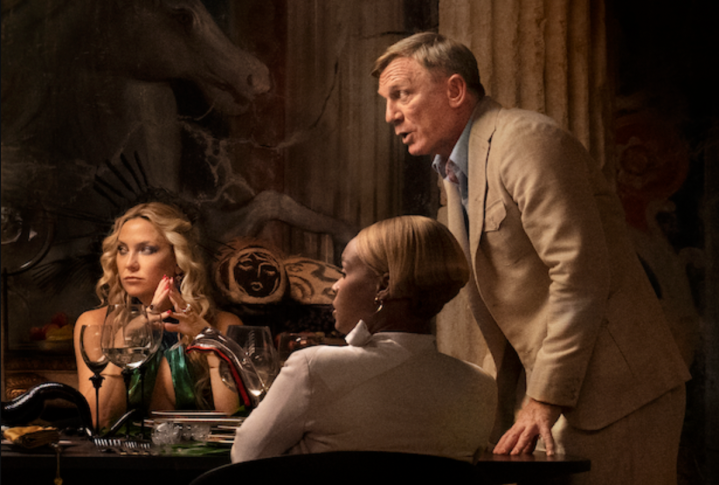 What a line-up! (Credit: Netflix)

I’m not gonna give anything away, but the story is absolutely gripping and you won’t see the twist coming.

You’ll be spitting out guesses of who the real killer is every step of the way and in the end, you’ll be shocked at how it all unravels.

Here’s the basic rundown: a gang of mates are summoned to their tech billionaire friend’s island for a murder mystery party, joined by the world famous detective Benoit Blanc.

Before long they find themselves thrust into an actual murder mystery when one of them winds up dead.

Glass Onion: A Knives Out Mystery has everything a good movie should have: a killer storyline (no pun intended), a mind-blowing plot twist, a divine cast, cheeky humour mixed with tasty drama and a gorg aesthetic.

When it comes to movies I’m usually one and done, as in I watch it once then give it a rest for at least a few years. But I’m legit counting down until December 23 when this gem hits Netflix so I can rewatch it and enjoy the magic again.

If you can’t wait until then, you’re in luck! Because it’s in cinemas for the next week only, so ya better hurry.

Peep the trailer below to get a feel for Glass Onion: A Knives Out Mystery and its immaculate vibes: