2022 really was the year of bonkers press tour drama because just like Don’t Worry Darling, there was mad tension with the Knives Out 2 Glass Onion cast.

A sneaky source told Deuxmoi that an unnamed cast member was pissed about how she was being perceived by the media in the lead-up to the film’s release.

“The knives are out,” the subject line reads.

The message goes, “This certain cast member is now happy that her performance is being outshined by another female cast member. She is mad that she is not getting any shout outs in any reviews and the red carpet pictures stick her on the sidelines of group pics while her cast mate is front and center and getting all the great buzz.

“Rumour has it that she presents as the friendly neighbour next door but in real life she is actually a witch.” 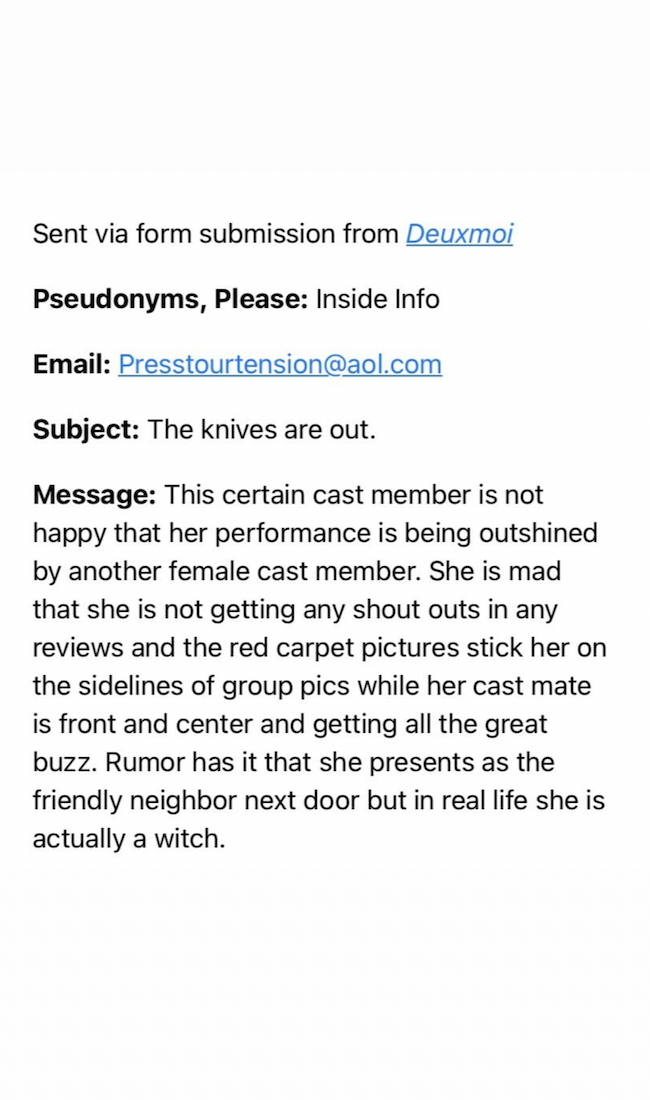 Take this one with a grain of salt, I reckon, ‘cos it’s just a rumour via goss babe Deuxmoi.

But as they say: where there’s smoke, there’s fire!

READ MORE
Killer Content: Here's Everything You Need To Know About Knives Out 2 Glass Onion

The film is being heralded as the best movie of 2022.

The sequel features an absolutely stacked cast, each of whom absolutely shine in their own ways.

The definite stand-out for me is Kate Hudson whose portrayal of disgraced ex-model Birdie Jay had me absolutely howling in the cinema.

I’m not going to give anything away, but the story is absolutely gripping and you won’t see the twist coming.

You’ll be spitting out guesses of who the real killer is every step of the way and in the end, you’ll be shocked at how it all unravels.

Here’s the basic rundown: a gang of mates are summoned to their tech billionaire friend’s island for a murder mystery party, joined by the world famous detective Benoit Blanc.

Before long they find themselves thrust into an actual murder mystery when one of them winds up dead.

Knives Out 2 Glass Onion is now streaming on Netflix. Go suss it out ASAP!