Accio wand, ‘cos shit’s about to get magical! The next instalment in the Harry Potter spinoff film franchise, Fantastic Beasts, officially has a title, concept and release date! The flick is titled The Secrets of Dumbledore, and it’s all about our main wizard, Dumbledore (obvs).

Have a read of the official logline:

“Professor Albus Dumbledore knows the powerful Dark wizard Gellert Grindelwald is moving to seize control of the wizarding world. Unable to stop him alone, he entrusts Magizoologist Newt Scamander to lead an intrepid team of wizards, witches and one brave Muggle baker on a dangerous mission, where they encounter old and new beasts and clash with Grindelwald’s growing legion of followers.  But with the stakes so high, how long can Dumbledore remain on the sidelines?”

In the Fantastic Beasts spinoff, Dumbledore is played by everyone’s smoking hot crush Jude Law and they’ve been teasing young Dumbledore scenes here and there in the previous flicks, but he hasn’t *really* taken centre stage yet, hence why this is such welcome news!

Let’s hope we’ll finally see Dumbledore living his best gay life with lots and lots of fucking. Think, The Talented Mr. Ripley, but older and wiser. And not a homicidal maniac.

Dumbledore was revealed to be canonically gay AFTER the books were released, but so far all we’ve seen is the tiniest hint of his gay yearning towards Grindlewald. The fans deserve more, damn it! 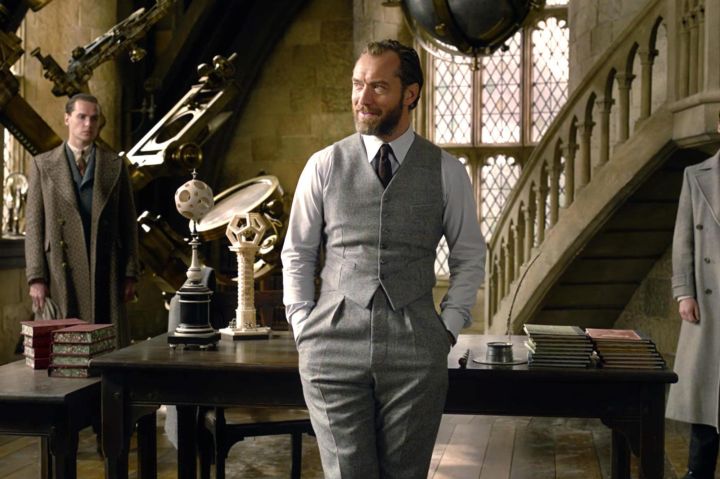 The prequel series is set decades before Harry, Ron and Hermione begin their tenure at Hogwarts, and it centres on magizoologist Newt Scamander (Eddie Redmayne), who befriends a young Albus Dumbledore amid the rise of the evil overlord, Grindelwald.

Last year, it was announced that Johnny Depp had exited the role of Grindewald, after Warner Bros. asked him to resign. Byeeee.

Actor Mads Mikkelsen was subsequently cast as Depp’s replacement, which is a fine choice, if ya ask me! The cast also includes Katherine Waterston, Alison Sudol, Ezra Miller, Dan Fogler and Jessica Williams.

David Yates is returning to direct the third movie, so we’re in good hands since he has experience on the Harry Potter flicks.

The Secrets of Dumbledore is set to be released in cinemas (remember those?) on April 7, 2022. Here’s hoping we’ll be able to apparate to the movies by then!