Elon Musk, a man who should probably just avoid social media for a little bit, has deleted a string of Tweets from his account, including one that featured a photo of a twerking Miley Cyrus from the 2013 MTV Video Music Awards.

Earlier this week, there were reports that Musk had found out the identity of an anonymous blogger and investor known as Montana Skeptic, and then called them, threatening to sue their employer unless they stopped making posts critical of Tesla.

When a follower asked if these reports were true, Musk replied: “Never heard of this girl. Was probably her mom.” The follower made a comment about how ‘Montana’ is a girl’s name, prompting Musk to post the racy photo of Cyrus, captioned: “They grow up so quickly …” 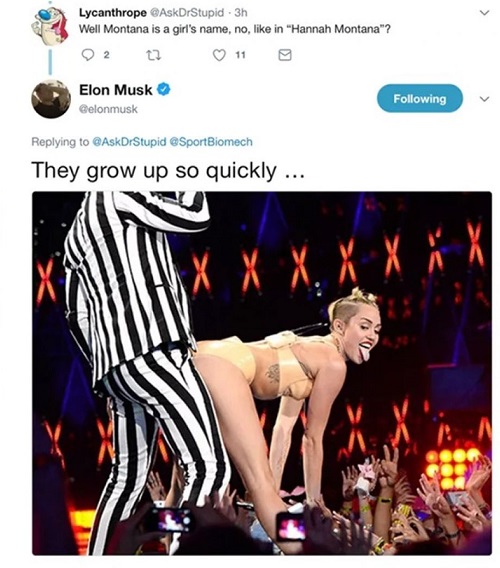 It’s not clear whether Elon Musk deleted the Tweets because of the racy picture of Miley, or because of some possible pending legal action against ‘Montana Skeptic’, or for some other reason entirely, but either way, here we are.

Mile Cyrus has yet to respond – her last Tweet, from earlier this month, shows her celebrating the Fourth of July on the back of an inflatable eagle – but her social media accounts have gone quiet in anticipation of a rumoured new album.

Earlier this week, Musk was photographed with his son and his new girlfriend Grimes, in an unfortunate image that was widely mocked because of the singer’s apparent resemblance to his teenage daughter.

Earlier, he was forced to apologise to a British cave diver after calling him a “pedo” in a particularly nasty public spat over the recent Thai cave rescue operation. Might just be time to log off Twitter for a moment, mate.