You can rest easy, folks, because the long nightmare is finally over – tech billionaire and Tesla head honcho Elon Musk has resolved his dispute with the creator of the infamous farting unicorn artwork, to the satisfaction of all concerned.

Last year, Musk Tweeted out an image of a mug featuring the unicorn in question, saying that it was possibly his favourite drinking vessel ever; he clearly liked it a lot, as the unicorn soon started showing up in various Tesla promotional materials, and even vehicle interfaces. 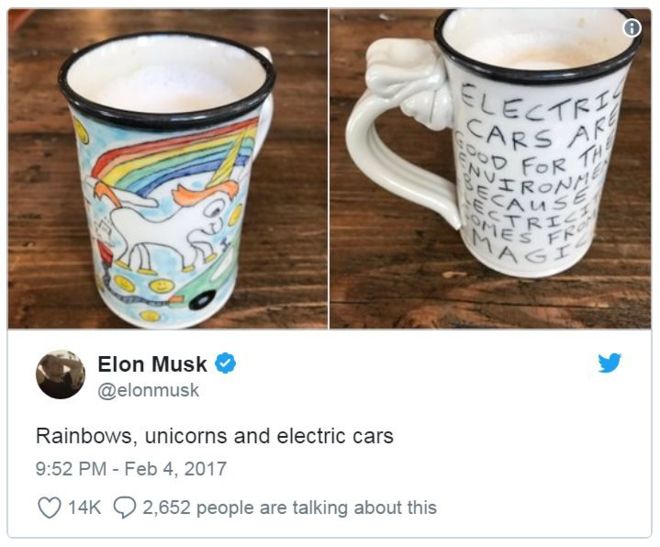 Problem is, the farting unicorn was the creation of a Colorado-based potter named Tom Edwards, and Musk never asked his permission to use the image. The artist’s daughter confronted him on Twitter, leading to drawn-out public spat that you can read more about on Edwards’ blog.

It seems, however, that the issue has been resolved, and right at a time when Elon Musk could desperately use some good press. In a post to his blog this week, Tom Edwards wrote:

“I am happy to report that with Tesla that resolves our issues in a way that everyone feels good about! It’s clear there were misunderstandings that led to this escalating, but I’m just glad everything has  been cleared up.”

Musk took a screenshot of the blog post and shared it with his 22 million followers, presumably also driving a lot of traffic to Edwards’ online store.

Last week, Elon Musk made headlines when he called a British rescue diver a paedophile, after the diver in question said some unkind things about his miniature submarine. Musk has since apologised to the diver, saying that he spoke “in anger.”