Demi Lovato Spoke Up About Being Raped By A Fellow Actor When She Was A 15 Y.O. Teen Star

CONTENT WARNING: This article discusses rape, sexual assault, drug overdoses and suicide. If you or someone you know is contemplating suicide or having suicidal thoughts, please call Lifeline on 13 11 14, or the Suicide Call Back Service on 1300 659 467. If you are in immediate danger, call 000.

Demi Lovato is gearing up to release her second YouTube documentary titled Dancing With The Devil where she reveals that she was raped at age 15 by an unnamed actor.

In the four-part documentary, the singer discussed her 2018 drug overdose, revealing that she “didn’t just overdose, I also was taken advantage of.”

“I’ve had my fair share of sexual trauma throughout teenage, child years. When they found me, I was naked, I was blue. I was literally left for dead after he took advantage of me, and when I woke up in the hospital, they asked if I had consensual sex,” she added.

“There was one flash that I had of him on top of me. I saw that flash, and I said yes. It actually wasn’t until maybe a month after my overdose that I realised, ‘Hey, you weren’t in any state of mind to make a consensual decision.'” 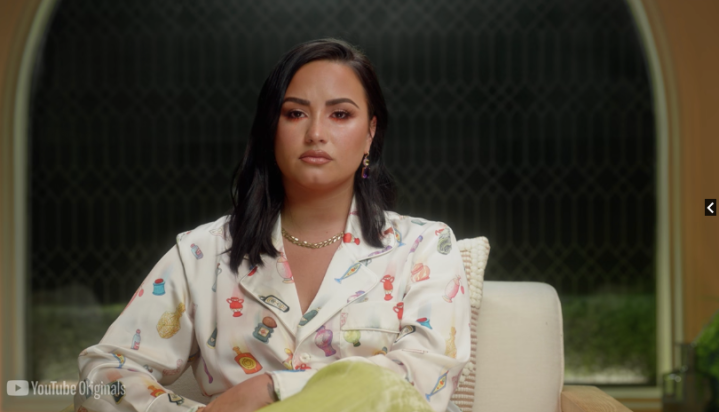 Demi Lovato went on to share that a “similar situation” occurred when she was a teenager.

“I lost my virginity in a rape. I called that person back a month later and tried to make it right by being in control. And all it did was just make me feel worse,” Demi Lovato said.

Recounting the assault, she explained, “We were hooking up, but I said, ‘Hey, this is not going any further. I’m a virgin and I don’t want to lose it this way.’ And that didn’t matter to them, they did it anyway. I internalised it, I told myself it was my fault because I still went in the room with him. I still hooked up with him. Here was the thing. I was part of that Disney crowd that publicly said they were waiting till marriage,” Demi Lovato said, obviously referring to the Jonas Brothers who famously wore promise rings back in the day.

“Then I had to see that person all the time, and so I stopped eating and coped in other ways — cutting, throwing up, whatever. My bulimia got so bad that I started throwing up blood for the first time.”

READ MORE
Demi Lovato Speaks Out For The First Time Since Overdose & I'm Not Crying, You're Crying

Dancing With The Devil by Demi Lovato premieres on YouTube on 24 Mar 2021.