Singer Demi Lovato has reportedly been attending rehab since July following an overdose at her Hollywood Hills home.

Around the same time that the 26-year-old’s mother Dianna De La Garza revealed that her daughter is 90 days sober, an episode of Keeping Up With The Kardashians aired that was filmed back in March where Lovato features.

In the episode, Kim, her husband Kanye West and their daughter North West attend the March For Our Lives in Washington DC.

Kim and Demi have been buds for a while now but this appears to be the first time that Lovato meets bb North who is a Lovatic (Demi Lovato fan).

“Demi’s my favourite”, North says in the ep.

North West, daughter of Kim Kardashian West, say’s Demi Lovato is her favorite on an episode of #KUWTK. pic.twitter.com/6mmIu11ykM

Lovato fans have taken to Twitter to share heartbroken tweets after seeing the singer months before her overdose and reinforce their support for her recovery.

omg Demi Lovato. I hope you're doing fine! We're all waiting for you #KUWTK

Omg @ddlovato on #KUWTK tonight has me emotional. I miss her!! ♥️

“She has 90 days,” De La Garza said. “I couldn’t be more thankful or more proud of her because addiction being a disease, it’s work. It’s very hard. It’s not easy, and there are no shortcuts.” 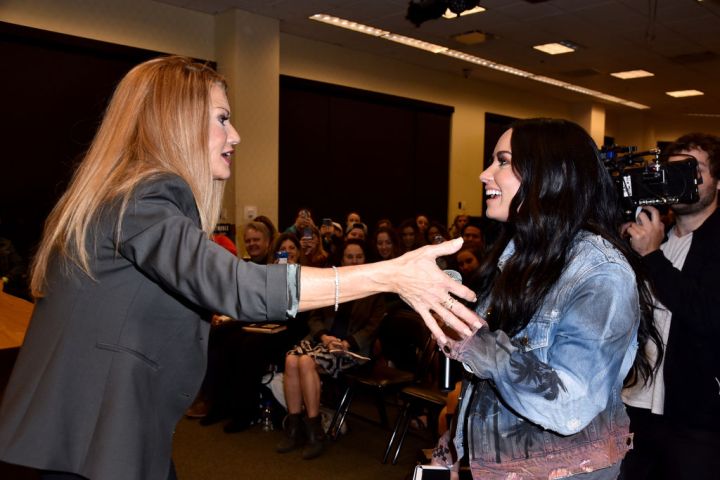 The concerned mother also revealed that she found out about her daughter’s overdose when people started texting her with apologies.

“The one text message that clued me in on what was going on said, ‘I just saw on TMZ and I’m so sorry,’ ” she adds.

“Before I could get to TMZ, I got the phone call from her assistant and she said, ‘We’re at the hospital.’ So then I knew, okay, she’s not gone,” she recalled. “She’s here. And I said, ‘What’s going on?’ And the words that I heard are just a nightmare for any parent: ‘Demi overdosed.’ ”