16 Huge Revelations In Demi Lovato’s Doco, From Her Drug Overdose To Her Ill-Fated Engagement

CONTENT WARNING: This article discusses rape, sexual assault, drug overdoses and suicide. If you or someone you know is contemplating suicide or having suicidal thoughts, please call Lifeline on 13 11 14, or the Suicide Call Back Service on 1300 659 467. If you are in immediate danger, call 000.

Demi Lovato is set to drop her second YouTube documentary titled Dancing With The Devil and we’ve just copped a bunch of spoilers and it’s so fucking sad.

In the documentary, the former child star bares all, discussing everything from her 2018 drug overdose to being raped by a fellow actor when she was a teenager to later being raped by her drug dealer.

Here, we break down the biggest revelations from the YouTube documentary:

In her previous YouTube documentary, Demi Lovato opens up about her struggles with addiction and says she’s now fully sober. In March 2018, the songwriter even celebrated six years of sobriety during a performance at Barclays Center in Brooklyn, New York.

Now, in Dancing With The Devil, Demi Lovato reveals that one month after that, she relapsed. “I remember thinking to myself, I don’t even know why I’m sober anymore. I’m so miserable. I picked up a bottle of red wine that night. It wasn’t even 30 minutes before I called someone that I knew had drugs on them,” she said. “I’m surprised that I didn’t OD that night.”

She recounted bumping into her previous drug dealer at an event who had a “duffle bag” of drugs. “I just went to town. I went on a shopping spree. That night, I did drugs that I had never done before,” the singer said. “I had never done meth before, I tried meth. I mixed it with Molly, with coke, weed, alcohol, OxyContin. That alone should have killed me.”

2. Becoming dependent on drugs and alcohol

Demi Lovato says that during a trip to Bali, she realised that she had become dependant on heroin, which prompted her to write her hit song, ‘Sober’.

She says she was also dependent on alcohol, which she realised during the European leg of her tour, as she was still drinking. “When I came back to L.A. after the tour, I picked up where I had left off,” she said. “I was very heavily using.”

3. Her drug and alcohol abuse was impacting her performances

Demi Lovato recalls forgetting the words to one of her songs while performing in California one day before the overdose.

4. The night she overdosed

On July 24, 2018, Demi Lovato went out for a mate’s birthday and ended up back at her place. Despite asking her girlfriends to sleepover, they went home, leaving only Demi with the guys, one of whom was her dealer.

“When I was leaving the house, she was, like, waving. I felt a little odd. I was just like, ‘Wow, that was a really nice night. Why do I feel like I should have stayed?'” her friend Vitale recalled, adding that she actually pulled over and considered going back. “I’m like ‘No, she’s a grown-up girl.’ In my mind, I’m, like, ‘What is she gonna do? She’s gonna go to bed.'” Lovato told her friends she was going to sleep but ended up calling her drug dealer at 5:30 in the morning.

READ MORE
Demi Lovato Spoke Up About Being Raped By A Fellow Actor When She Was A 15 Y.O. Teen Star

5. She was raped the night of her overdose

“I didn’t just overdose, I also was taken advantage of,” Demi Lovato says. “I’ve had my fair share of sexual trauma throughout teenage, child years. When they found me, I was naked, I was blue. I was literally left for dead after he took advantage of me, and when I woke up in the hospital, they asked if I had consensual sex. There was one flash that I had of him on top of me. I saw that flash, and I said yes. It actually wasn’t until maybe a month after my overdose that I realised, ‘Hey, you weren’t in any state of mind to make a consensual decision.'”

6. She had three strokes and a heart attack

Demi Lovato said that she suffered three strokes and a heart attack and was told by her doctor that she only had 10 minutes to live, before ultimately recovering.

In addition to having three strokes and a heart attack, Lovato also had pneumonia, because she had been asphyxiated, and multiple-organ failure. A tube had to be sewn into her throat to remove her blood, have it cleaned then return it to her body.

She was also “legally blind” when she woke up. “My little sister was at my bedside. I was so blind that I couldn’t see who she was even though she was standing next to me,” she said. “I asked her, I was like, ‘Who are you?’ She just started sobbing.”

8. She later relapsed and called her rapist / dealer

The night that Demi Lovato returned from a weeklong “intensive trauma retreat” after the overdose, she says she called the dealer who was responsible for her overdose.

“I wanted to rewrite his choice of violating me. I wanted it now to be my choice, and he also had something that I wanted, which were drugs,” she said. “I called him back and said, ‘No, I’m gonna fuck you.’ It didn’t fix anything. It didn’t take anything away. It made me feel worse. That, for some reason, was my way of taking the power back. All it did was bring me back to my knees, begging God for help. I ended up getting high. I thought, how did I pick up the same drugs that put me in the hospital? I was, like, mortified at my decisions.”

9. Her friend was blamed for Demi’s overdose

Vitale says that after the news came out, she started receiving threats from Demi Lovato fans who blamed her for the drug overdose. She says she received 4000 to 5000 messages a day telling her to kill herself and she ended up losing her teaching job and was fired by every artist she worked with.

10. She was raped by an actor as a teenager

Demi Lovato went on to share that a “similar situation” occurred when she was a teenager.

“I lost my virginity in a rape. I called that person back a month later and tried to make it right by being in control. And all it did was just make me feel worse,” Demi Lovato said.

Recounting the assault, she explained, “We were hooking up, but I said, ‘Hey, this is not going any further. I’m a virgin and I don’t want to lose it this way.’ And that didn’t matter to them, they did it anyway. I internalised it, I told myself it was my fault because I still went in the room with him. I still hooked up with him. Here was the thing. I was part of that Disney crowd that publicly said they were waiting till marriage,” Demi Lovato said, obviously referring to the Jonas Brothers who famously wore promise rings back in the day.

“Then I had to see that person all the time, and so I stopped eating and coped in other ways — cutting, throwing up, whatever. My bulimia got so bad that I started throwing up blood for the first time.”

11. Her struggle with eating disorders

Demi Lovato revealed that she has struggled with eating disorders since she was young, revealing that her self-esteem was “completely damaged” while participating in beauty pageants. “I remember making a pact with myself and said, ‘If I don’t win this pageant, I will never eat again,'” she recalled.

12. Her issues with her late father

“I longed for that relationship with him and then I resented him because he was an addict and an alcoholic and was abusive to my mom,” the singer said of her father, Patrick Lovato, who died in 2013.

13. Her struggle to remain sober

“Telling myself that I can never have a drink or smoke marijuana, I feel like that’s setting myself up for failure because I am such a black and white thinker. I had it drilled into my head for so many years that one drink was equivalent to a crack pipe,” Demi Lovato said. “I don’t want people to hear that and think they can just go out and try having a drink or smoking a joint. It isn’t for everybody. Recovery isn’t a one-size-fits-all solution. You shouldn’t be forced to be sober if you’re not ready. You shouldn’t get sober for other people.”

14. Her engagement to Max Ehrich 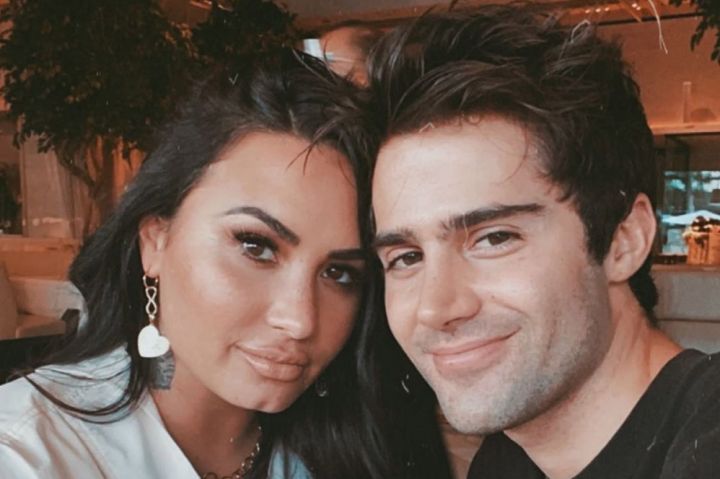 The documentary starts with Demi Lovato revealing that she’s engaged to Max Ehrich and you can just feel her excitement.

Then as filming went on, their relationship fell apart and she called off the engagement.

“The video I made earlier wasn’t an accurate representation of what I’m going through,” she said through tears. “I thought this whole time that I didn’t miss him. I just miss the person that I started quarantining with, and I don’t know how to give my heart to someone after this.”

She continued, “What happened? I think I rushed into something that I thought was what I was supposed to do. I realized, as time went on, that I didn’t actually know the person that I was engaged to. … I was just as shocked as the rest of the world at some of the things that were said and done.”

The pair announced their split in September.

15. She was misdiagnosed with bipolar

“I’ve been told that they think I was misdiagnosed when I was 18,” Demi Lovato said. “I thought that it put reasoning behind my actions. I had to grow up. I had to grow the fuck up.”

16. What inspired her to “get clean for good”

Demi Lovato said that she knew she needed to “get clean for good” when she realised what prompted her overdose.

“What I had done the night I overdosed was fentanyl. That’s a whole other beast,” she said. “Realising the high I wanted would kill me, is what I needed to get me clean for good.”

Dancing With The Devil by Demi Lovato premieres on YouTube on 24 Mar 2021.