If you’re like me and absolutely froth the idea of watching a bunch of celebs pile into a house and make dumb as hell conversations with each other, then chances are you’ve heard about Celebrity Big Brother and are positively fanging for it.

Given that I am excited as hell about this, I’ve gathered up all the vital info I can possibly find so that you, my fellow reality-loving fiend, can be well-informed about all things Celebrity Big Brother.

First things first, even though everyone and their nonna will be calling it Celebrity Big Brother, its official title is Big Brother VIP, and it’ll be hosted by Sonia Kruger on Seven.

Is there a Big Brother trailer?

Sure is, babeyyy! The trailer just landed and it looks like a wild fkn ride.

In one scene, Caitlyn Jenner, who is said to be the first to exit the show, as stipulated in her contract, discusses her trans journey with her housemates, including Survivor star Luke Toki and ex GF of Kyle Sandilands, Imogen Anthony.

“You’ve probably never met anybody who is trans?” Caitlyn says to Luke. “Let me see if I can try to explain. Are you right-handed or left-handed?

“Right-handed,” Luke replies, to which Caitlyn says: “Why are you guys right-handed and me left-handed?”

“Well, it’s just the way you were born,” Luke said, which is Caitlyn’s point.

The decency of the show then takes a complete and utter nosedive, as we see Thomas Markle Jr writing a letter to Meghan Markle and Prince Harry, after famously doing so in April 2018 when he reportedly begged the prince not to marry his sister.

“I’m gonna write a letter to Meghan,” Thomas says to Big Brother, in one of the tackiest moments you’ll ever see on reality TV (legit watching Merv Hughes eat bugs on I’m A Celeb was more redeeming than this nonsense).

“Dear Meghan and Harry…The first thing I want to say to both of you…” he writes in the letter, and frankly, I don’t care to know the rest of that sentence.

When is Celebrity Big Brother filming?

It is understood that filming of Big Brother VIP will begin at the end of August, and that the show will have a whole smorgasbord of international guests — many of whom are currently in hotel quarantine. More on them a bit later.

There has already been a whole heap of rumours about who will and won’t be appearing on the show, and we’ve gathered them all into this yarn right here for you.

Where is the Big Brother VIP house?

According to the Daily Mail, Channel Seven is constructing a purpose-built house for Big Brother VIP at Sydney’s Olympic Park precinct. Even though the area is a stone’s throw from the raging COVID-19 red zone, and all construction work in NSW was halted, as of July 21 the work was still ongoing.

Who is in the Big Brother VIP cast?

Channel 7 confirmed the cast of Big Brother VIP earlier this month and, bar one new addition to the crew, it’s all quite similar to the Daily Mail leak from last month.

Roll out the red carpet, your VIPs are coming soon to @Channel7 #BBAUvip ???? pic.twitter.com/LZATKJQeU7

Sorry to half of these men and women but I don’t know her. They could be walking down the Big Brother house and I wouldn’t know a damn thing. Not to compare this to Celebrity Big Brother UK but who’s the Gemma Collins of the cast? The Tiffany ‘New York’ Pollard? Hell, is there even someone in this list that can give us the same wholesome and informative content that Courtney Act did on her winning szn?

Woman’s Day previously reported that all kinds of celebs have been frothing to join the new rendition of Celebrity Big Brother ever since it was announced.

“Celebrity agents are falling over themselves to cast their talent,” a Big Brother insider told the publication.

“The Seven Network is keen on getting real celebrities with real credibility.”

This cast seems about white to me, looking at all these names.

The only POC on the cast is, apparently, Donald Trump‘s advisor Omarosa Manigault Newman. Did they just want to find every problematic person under the sun and chuck them into a house together???

Here are some pics of the Big Brother VIP cast

You’ve got your STUNNING women:

Typical straight model with an eight-pack:

And your casual Trump advisor, because y’know, what’s Big Brother without that?

Despite changing her opinion on Trump in 2017, it’s really upsetting to think that the only POC Channel Seven has cast in Big Brother VIP is one with ties to white conservatism.

“We’ve heard from a very close source that Jessika Power from MAFS is locked to go into the Celebrity Big Brother house,” McGilvray said.

“I don’t know who’s going in but well I got told is that the cast will blow you away,” Fitzy said.

Ahh yes, because when I think international I think ‘Jessica with a K’ Power.

Jessika Power was also spotted by Daily Mail Australia flying from her native Brisbane to Sydney, just in time for the commencement of Big Brother VIP filming. Coincidence? I think not.

She also shared a video where she appeared to be in a hotel, perhaps quarantining (her favourite activity).

To make a long story short, Neil Patrick Harris came over to Sydney to make his appearance on Australia’s Got Talent, but after the show got axed due to COVID, he went back home, after only just completing two weeks quarantine.

Rumours were floating around that this cancellation has prompted Seven to move him over to Celebrity Big Brother. But, as of the cast announcement, it seems that this season won’t be so legend—wait for it—dary after all.

Much to think about here.

Sources have told News Corp’s Confidential that Jenner is tipped to join the Celebrity Big Brother house, however, Channel 7 has yet to comment on this casting, so take this with a grain of salt.

Jenner previously competed on the UK’s I’m A Celebrity… Get Me Out Of Here in 2019, as well as the American Masked Singer earlier this year.

In late July, Jenner was spotted flicking ciggies off her quarantine hotel balcony, so it looks like she’s (unfortunately) locked in for the show.

When Jenner’s not dabbling in reality TV, she’s running for governor of California. She also likes to go on TV and say things like how it was easier to come out to her family as trans, than as a Republican candidate, so take that how you will.

READ MORE
Caitlyn Jenner Was Spotted Flicking A Ciggie Off A Syd Balcony, So Pls Get The Fuck Outta Here

According to the goss mongers at The Wash, Vanderpump Rules legend Jax Taylor and Home & Away lad Lincoln Younes have been linked to the revived reality show.

The publication posted a bunch of piccies of the rumoured Big Brother VIP line-up and under Lincoln, they wrote “tipped by Woman’s Day” and under Jax, they pointed out that he ~mysteriously~ started following the Big Brother Australia Instagram account, which is rather unusual considering it doesn’t even air over in the States.

Jax Taylor is a big old rumour, because the only piece of evidence is the fact that he followed the Celebrity Big Brother Australia account. Meanwhile, Younes would have been a great choice, given the fact that he’s a famous Aussie (and also a hot Aussie who everyone loves).

However, Lincoln has now confirmed that he is not involved via Instagram. Jax on the other hand, is still a mystery. 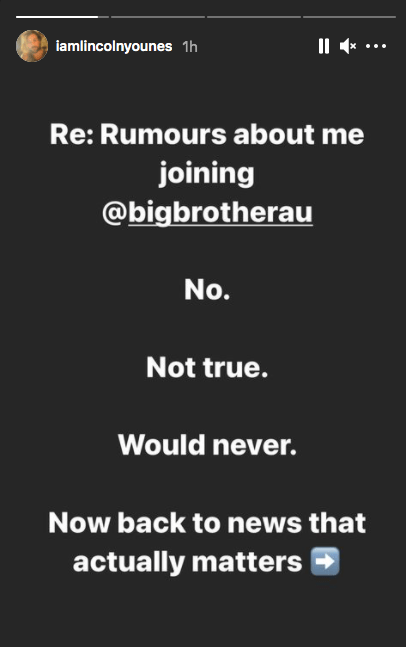 This one is a fkn shellshock and a half, and I would love to know what the producers of this show were thinking when they (allegedly) thought of this one.

According to New Idea, Thomas Markle Jr has arrived in Sydney for the purpose of filming an unnamed reality tv show. Praying that it’s a cameo on The Bachelor or something, please lord.

Rumour has it this casting choice was done to replace Katie Hopkins, which is an intriguing piece of information.

Aside from constantly undermining his half-sister’s choices, Thomas Markle Jr has previously been arrested for allegedly putting a gun to his girlfriend Darlene Blount‘s head during a drunken argument.

Katie Hopkins can fuck off forever

How much is the cast of Big Brother VIP being paid?

Earlier, we reported some spicy tea that Jessika Power was rumoured to only be copping a $20k payday for Celebrity Big Brother while Caitlyn Jenner was allegedly pulling a six-figure deal. Not bad for a few days’ work, am I right?

We’ll update this article as soon as more details come to light, including when the cast is officially confirmed.