The ACT Is Celebrating Queensland’s Borders Reopening To Canberrans With A Surfing…. Penis

Today, Canberrans received the welcome news that they would once again be welcomed into Queensland. To celebrate, the ACT Government, including ACT Chief Minister Andrew Barr, posted a photo of what can only be described as a surfing penis. There is no other way about it.

After spending a good ten minutes trying to find out what the hell that image was supposed to be, turns out it’s actually a pic of a famous owl statue in Canberra that is notoriously mistaken for a penis.

Canberrans have been celebrating this strange statue for years now, and tbh I’m just glad that the ACT government are spreading the love. You have to admit though, upon first inspection it definitely looks like a withering corpse of a haunted penis.

“BREAKING: Queensland borders will open to the ACT at 1 am on Friday, September 25.

“Premier Annastacia Palaszczuk and Andrew Barr ACT Chief Minister spoke last night to confirm that the ACT will be removed as a hotspot. Quarantine-free travel will be allowed by air only. You can’t drive through NSW to get to Queensland.

“This means Canberrans can again fly to the Sunshine State without needing to quarantine. This is great news for people who have not been able to see family and friends for a number of weeks.” 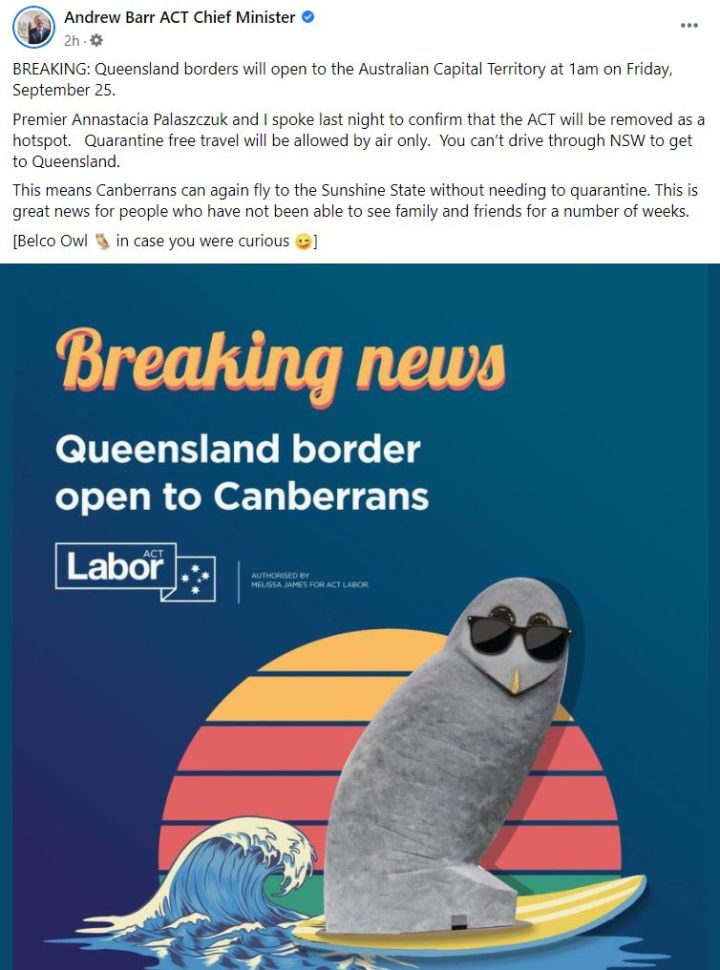 The legendary statue on Belconnen Way was installed in 2011, and while it appears to look like an owl from the front, it most definitely looks like a huge grey penis from the back, which is truly something to admire.

It was constructed by artist Bruce Armstong, who was shocked when a week after it went up, he received complaints from people who believed the majestic owl looked like a huge grey dick.

I dunno man, you be the judge.

People of Canberra have grown to love the meme potential of this mighty owl, dubbing it ‘The Great Penis Owl of Canberra’. No joke.

There’s even a whole Facebook page dedicated to his greatness, featuring a whole litany of memes that worship him as some ungodly overlord. I for one worship my feathered penis-looking king.

You can check out some of the quality posts made in The Great Penis Owl of Canberra page below.

I’m starting to see how much limitless meme potential this owl possesses. Honestly, if I were a Canberran, it would be all I talk about to confused tourists.

Good on the ACT government for having a sense of humour in their posts, but damn I never want to Google “surfing owl penis” again.

And if you want to cop the Belco Owl on a summery t-shirt, the ACT has you covered right here.