The Bachelorette 2019 bbs Angie Kent and Carlin Sterritt called it quits in the midst of the pandemic so, honestly, it feels like it happened a lifetime ago, but on paper it was only back in July, and therefore we’re still very much keen for the tea.

Australia’s darling Angie Kent visited the The Kyle & Jackie O Show where she was, once again, asked about her split from her Bachie winner and her answer was v. intriguing to me.

After their breakup earlier this year, both parties were rather cryptic about the reasons, with Angie often saying things like, “chemistry doesn’t always mean compatibility” and “our values were different,” as she previously told the radio hosts back in September. 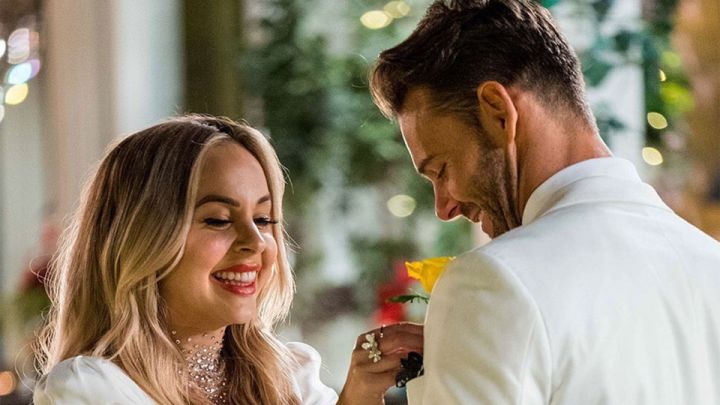 Now, Angie Kent has elaborated on her reasons for the split and this time the ‘r’ word has reared its head.

“We were so smitten with each other on the show, but we were so different [out in the real world]. Both of us were different,” she said.

“I’m always myself, but he got to see me full throttle, and I was stressed after the show too. He was very religious and had all these ideas that I should be a certain way when I wasn’t.”

She added, “I don’t want to be with somebody who wants me to change. I want somebody to love me for me.” Well, that’s fair!

Angie Kent later revealed that despite being single, she’s not ready to “jump into” another relationship just yet.

“I’m not cuddling with anyone, I’m so boring. Carlin and I only broke up a few moths ago, and I don’t want to jump straight into something else. I don’t know if I trust yet,” she said.

The breakup was announced on July 1st via Instagram. In a long and emotional post, Angie Kent wrote: “We have not wanted to confirm up until this point because there have been much bigger issues going on in the world and we’ve both been taking space to think about what we really want.”

She continued, “Matters of the heart are extremely difficult and I’m sad to say that Carlin and I have broken up. I wish him nothing but the best in the future. I appreciate everyone’s concern and the investment that many of you made into the show and our story, but this is real life and we both need privacy and time to heal.”

Angie Kent said she just wanted to put the rumours to bed so the questions would stop.

“Please remember we are both human beings like everyone else, so be kind if you do choose to leave comments or messages. Words can be very hurtful – and compound already difficult times.” 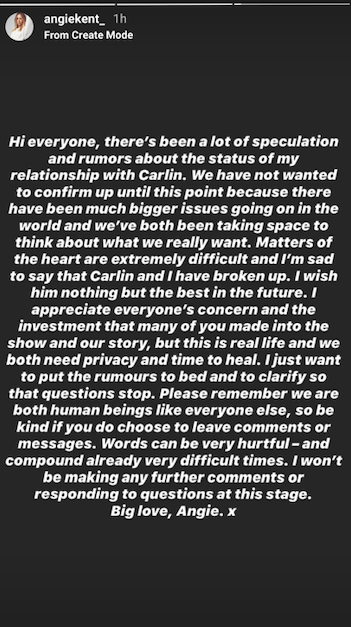 Carlin also shared an Instagram Story about his split from Angie Kent.

Carlin added that he wants nothing but the best for her. Bless.