If you knew the sheer amount of doughnuts that get delivered to the PEDESTRIAN.TV office on any given week, you would be equal parts amazed and disgusted.

A daily drop of all manner of nuts, from gold-flaked morsels by now-defunct Doughnut Time, to Krispy Kreme Simpsons D’ohnuts, to rude finger-shaped doughnuts dipped in fuck off amounts of Nutella is common place. People don’t even get out of their chairs anymore. Even though they’re free, for Pete’s sake.

So when half of the office got off their keisters to check out the fresh box of baked goods sent to us by Donut King, I knew they had created something genuinely terrifying.

Your favourite suburban-mall-hot-dogs-and-doughnuts chain has finally entered the mutant-nut market with a V Donut.

It’s a slime-green-tinged pouf covered in sugar and filled with, you guessed it, actual guarana. That’s the active ingredient in the iconic green energy drink, and if you believe the hype, one bite of this nut will get you buzzing.

(I’ll have you know I broke my fastidiously-healthy day of eating to trial this, I didn’t even want to, so please be thankful.) 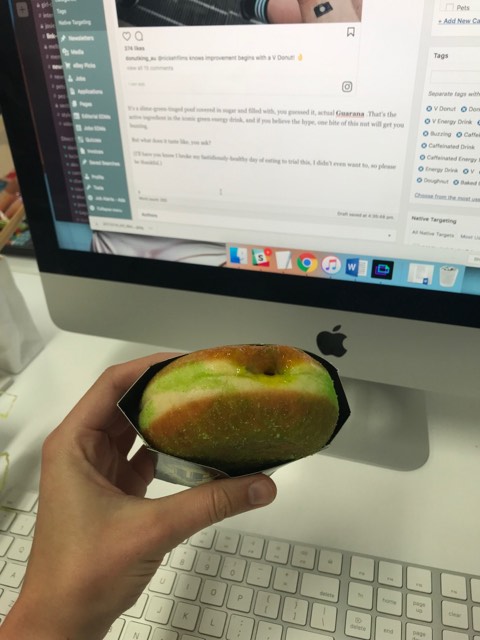 Let’s talk smell. It smells like a regular sugary doughnut. Doughnuts are notoriously good smelling, so this gets a tick. Upon licking the surface however, it is clear this is not your average nut. The green sugar has a decidedly guarana-ry tang to it. Not sure I’m massively into it, but I forge ahead.

I don’t know what it is about green foods, but if they aren’t vegetables they wig me out. It feels radioactive. This Oscar The Grouch-looking thing is no different. It also has a hole in it where it has been inseminated by the green V juice, and after uploading a pic of it to my Instastory, a friend quickly pointed out that it looked like “Shrek nutting on Fiona’s ass.”

Mmmm. Despite this mental image that is now seared into my brain, I must persevere and take that first fateful bite.

Ok. So the filling tastes just like a congealed V. It’s just V, but in goo form. This goop has seeped into the inside walls of the doughnut. So you can’t even eat around the green fluid.

This doughnut is entirely defiled.

I take another bite.

Apologies for the stream-of-consiousness but I am writing this immediately after consuming one (1) bite and I feel slightly high. I feel affected. I feel souped up. On a V doughnut, no less.

I feel like Millhouse in that episode of The Simpsons where him and go on that All Syrup Super Squishy Bender, except I’m a human adult who is at work and needs to concentrate. Wawaweewow. 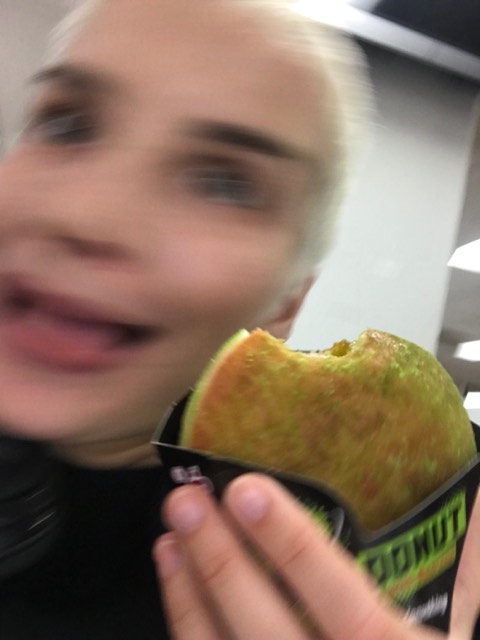 I would not purchase this doughnut with my own hard-earned cash. I have four more of them sitting here, untouched, on my desk. I am frugal but not even I will be saving these for later.

That said, if you’re a big fan of energy drinks, this might be more your speed.

But as Shrek once told Fiona one fateful pre-anal night in the swamp… Don’t knock it till you’ve tried it.