Aldi’s Slinging A Bottle Of Legit Champers For $25 So Let’s Get Fancy, Folks

Your friends at discount grocery store Aldi – you know the one with the off-brand and delicious everything, the ones who win all the awards for their cheap af wine – are selling a heaps legit bottle of fancy Champagne, real Champagne, from that region of France (it’s about an hour-and-a-half east of Paris) for $25 for Chrissie.

The Monsigny Champagne Premier Cru apparently has notes of brioche and pear and citrus and honey, and all of those things, I want them now, I want to guzzle this wine, just pour it straight into my facehole. 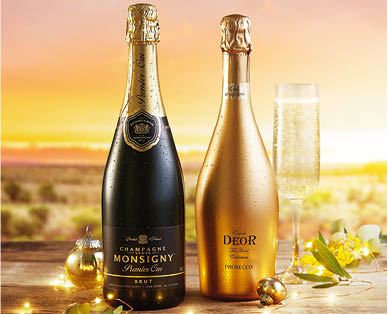 What does it mean if it’s Premier Cru? Well it means it comes from one of the 43 villages in the Champagne region that have the best stuff. The primo stuff. The stuff Napoleon himself would be knocking back after some casual conquering back in the 1800s.

The Aldi stuff is also a prize winner, earning a casual Top 11 Blue Gold and Best Sparkling Wine of the Competition at the Sydney International Wine Competition in 2015.

Despite what Black Books said, there’s really no correlation between more expensive booze being more tasty, as Aldi has proven time and time again with their Gold awards. Like this $35 whisky, a $28.99 gin, or this $7 shiraz.

If you can’t even afford $25, they’re also selling a different award-winning champagne on special rn for $19.99. I spent more than that on lunch today. Their Veuve Monsigny Brut Champagne NV blends 60% Pinot Noir, 20% Chardonnay and 20% Pinot Meunier and has won prizes from Winestate and at the Melbourne International Wine Competition for YEARS.

Go forth and get a champers headache, pisshead pals.

READ MORE
ALDI’s Flogging A 1.5L Magnum Of French Rosé For $25 So Call The Girls